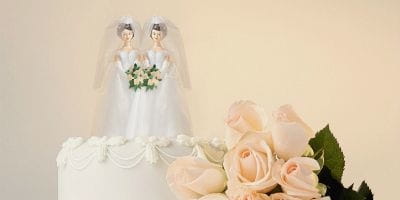 Former President George H.W. Bush and his wife Barbara attended a wedding a few days ago, and it made national news. According to The Washington Post, the elder Bushes attended the wedding of Bonnie Clement and Helen Thorgalsen, held at Kennebunkport, Maine. The two lesbians, co-owners of a general store in neighboring Kennebunk, were married in an outdoor celebration attended by family and friends. The 41st President of the United States was present, along with the former First Lady. Bonnie Clement told The Washington Post, “Who would be best to acknowledge the importance of our wedding as our friends and as the former leader of the free world? When they agreed to do so we just felt that it was the next acknowledgement of being ‘real and normal.’”

As it turns out, President Bush did not merely attend the wedding. He also served as an official witness, signing the legal documents for the ceremony and the Maine wedding license. Under a photograph with the former president the couple added the words, “Getting our marriage license witnessed!”

The news coverage of the Bushes’ attendance at the same-sex wedding points to a reality that must be understood — and fast. Attendance at a wedding is not a neutral act. The history and context of the wedding ceremony identify all those present as agreeing to the rightness of the marriage and acting as witnesses to the exchange of vows. This is why the venerable language of The Book of Common Prayer, used in the overwhelming majority of Christian weddings, calls upon anyone with knowledge that the proposed union is invalid to speak, “or forever hold his peace.” Anyone remaining silent at that point is affirming the rightness and validity of the marriage, and all who are present are counted as both witnesses and those who celebrate the union.

This issue arose two years ago when controversy erupted over comments that Houston megachurch pastor Joel Osteen made on CNN’s Piers Morgan Tonight. In response to a question from Morgan, Osteen said that he would not officiate at a same-sex wedding. Morgan then pressed him by asking if Osteen would attend a same-sex wedding. Osteen replied:

Well, I haven’t been to many weddings lately to begin with and I’m talking about somebody that was, you know, dear to us. I’m not going to disrespect somebody that’s dear to us and say, you know what, you’re not good enough for us or something like that. That’s the way that I would see it. Now, I’m not going to just run off and go attend, you know, certain marriages just to make a statement because that’s not who I am and that’s not what I stand for and, again, I don’t look down on those people.

We must certainly understand the relational challenges and the predicaments that this poses for Christians who do not believe that same-sex marriage is right in the sight of God. Those who would affirm same-sex marriage and the normalization of homosexuality must defy the clear teachings of Scripture. Christians cannot affirm what the Bible defines as sin, and yet that is what is demanded of us in our current cultural context. One of the hardest issues for every Christian will be the responsibility to relate to everyone we know with both love and truth.

But it is truth that protects love from dissolving into mere sentimentality. Likewise, it is love that prevents truth from being reduced to impersonal abstractions. At some point or another, almost all of us will be put into the situation Piers Morgan asked Joel Osteen to consider. At some point, we will either attend a same-sex ceremony, or we will not. Declining to attend will come with undeniable relational consequences, but so would attending. As one believer who struggles with same-sex attraction recently told me, “It does not help when fellow Christians send mixed signals.” We cannot allow our love to lapse into sentimentality, even as we love those who plan to enter into what we know is not and cannot be marriage. Note carefully that Bonnie Clement spoke of the Bushes’ presence at the wedding as a powerful affirmation that the union was “real and normal.”

A spokesman for President and Mrs. Bush said that the former first couple attended the wedding as “private citizens attending a private ceremony for two friends.” There are two problems with this account. First, if the Bushes were simply private citizens, there would have been no news story. After all, Bonnie Clement told the newspaper that President Bush had been invited as a friend “and as the former leader of the free world.” Needless to say, being identified as “former leader of the free world” is not a private matter. Second, a wedding is not actually a private affair. That marriage license was not filed with friends, but with a legal authority. And that legal document, available for public view as a public record, lists George H.W. Bush as an official witness to the union. The Washington Post had every good reason to declare that the former president had “come out in support of same-sex marriage.”

But, this is not just about the Bushes. The same predicament remains, even if we are not the former leader of the free world. To be present at a wedding is to affirm that it is right, whether you sign a legal document or not.

No one said this was going to be easy, and this is hardly the end of the predicaments and perplexities that will challenge Christians who stand on biblical teaching in the days ahead. This is one question, however, that Christians had better think through fast. A wedding invitation might soon be headed your way.