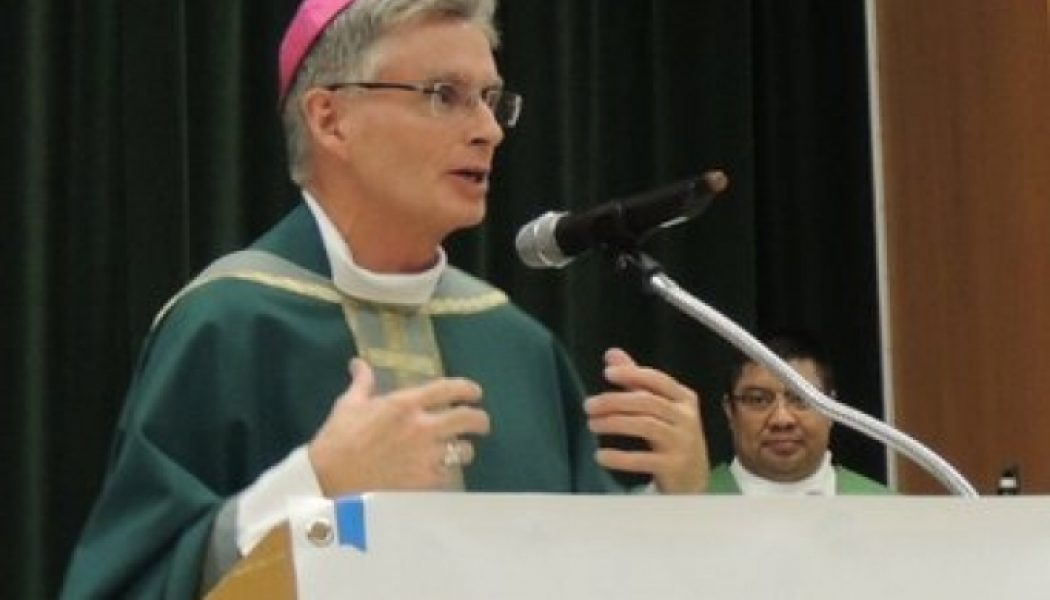 In response to the controversy, in the Diocese of Spokane “the Annual Catholic Charities Christmas Collection will either be replaced by or taken in conjunction with the Black and Indian Missions Collection,” Bishop Daly said.

“I am a racist. That’s the hard truth. I am a racist. How could I not be? As a white person living in America, where every institution is geared to advantage people who look like me, it’s seemingly impossible for me to be anything other than a racist,” Rob McCann, CEO of Catholic Charities of Eastern Washington, said in a video posted to YouTube June 19.

“My Catholic Church, and my Catholic Charities organization, is racist. How could they not be? Our Catholic faith tradition is built on the premise that a baby, born in a manger, in the Middle East, was a white baby. So how can we be surprised to know that we must still fight against racism,” McCann added in the video.

Jesus Christ was a Jewish man, born to Jewish parents in the Middle East, centuries before contemporary categories of racial identification emerged amid European colonization in various parts of the world. The Catholic Church teaches that the Jewish and Israelite identity of Jesus are central aspects to his role in salvation.

McCann’s video also said that “the Catholic Church in America has its own long, terrible history of owning slaves, staying silent about others who did the same, and being part of the institutionalization of racism.”

The CEO said that Catholic Charities has been “unknowingly part of the institutionalization of racism,” because its board and staff is primarily composed of white people, while those it serves are “disproportionately people of color.”

On July 5, McCann posted a set of “clarifications” on the website of Catholic Charities of Eastern Washington.

In his clarifications, McCann wrote that in his video, “instead of engaging in a discussion about race, I spoke in a way that some heard as a critical rant against the Church. For that, I am deeply and truly sorry.”

He noted that by identifying himself as a racist, he meant: “I realize that due to my upbringing and my membership in the majority race in this country, I certainly have areas of both known and unknown bias in my heart that I need to work on, and that in my lifetime I have struggled with those biases in ways that are so subtle I may not have fully realized them.”

“As an individual with white privilege, I certainly have had moments where I could and should have done more to be actively anti-racist.  I am not saying that all white people are racists or that all Catholics are racist.  I am acknowledging that I need to deeply evaluate my own sin in this area every single day and that I hope others will do the same.”

On his charge that the Catholic Church and Catholic Charities of Eastern Washington are racist organizations, “what I intended to convey is that my experience of my own flawed faith life and my experience inside human organizations, lead me to know that there are areas of both known and unknown bias, as well as areas of historical mis-steps that should be acknowledged in order to be a positive force for change.”

McCann’s clarifications also addressed his charge that Catholicism is premised on the notion that Jesus Christ was white.

“My description of our Catholic faith tradition being built on the premise that a baby born in a manger in the Middle East was a white baby has also caused pain, and here I must admit I misspoke and was wrong to say it that way,” McCann wrote.

McCann said that after the video’s released, his pastor had reminded him “that in other parts of the world, and in some places in the U.S., artistic and pictorial representations of Jesus are in the images and likenesses of the local culture. Jesus, and the entire Holy Family, are consistently, artistically, beautifully represented as members of every race and culture around the globe where there are Catholic churches,” he wrote.

The letter came after a meeting between McCann and Spokane’s Bishop Thomas Daly.

In a July 5 statement, Bishop Daly said of that meeting that “our conversation was candid and frank – and hopefully productive.”

In response to the controversy, in the Diocese of Spokane “the Annual Catholic Charities Christmas Collection will either be replaced by or taken in conjunction with the Black and Indian Missions Collection,” Bishop Daly said, adding that Catholic Charities will be asked “to sponsor a series of speakers, approved by me, to address the subject of Church and Race.”

The organization will also “address the issue of abortion and its detrimental effects on the Black community. In places such as New York City, more Black babies are aborted each day than are born. As Catholics, we believe in the sanctity of life from conception to natural death,” the bishop added.

While McCann’s “letter answers some of my concerns, others remain. His support of the Black Lives Matter organization (BLM), albeit now modified, puzzles me. BLM is in conflict with Church teaching regarding marriage, family and the sanctity of life. Moreover, it is disturbing that BLM has not vocally condemned the recent violence that has torn apart so many cities. Its silence has not gone unheard. One need not stand with BLM to stand for Black lives. I will address this and other issues with Dr. McCann in future meetings,” Daly said.

The phrase “Black Lives Matter” has become the rallying cry for a broad social movement. But there are also specific organizations which take the slogan into their name, the largest and best-funded of which is the Black Lives Matter Global Network Foundation.

The Black Lives Matter Global Network Foundation aims to “foster a queer‐affirming network. When we gather, we do so with the intention of freeing ourselves from the tight grip of heteronormative thinking,” the group’s website says.

In his statement of clarification, McCann wrote that “Our support of the important non-violent racial justice advocacy elements of Black Lives Matter is specifically support for human dignity, which has a clear connection with Catholic Social Teaching. To be clear, we support the concept of Black Lives Matter, but that does not mean we support any elements of that movement that promote violence or violate Church teachings.”

“We affirm the life and dignity of every human person from conception to natural death. We stand firmly against abortion, poverty, violence, and the death penalty. Racial justice and equality are values inherent to life and dignity, and Catholic Charities is not only dedicated to upholding those values, we stand willing to work in strength and in peace to see those values realized in our world.”

McCann was appointed executive director of Catholic Charities of Eastern Washington in 2005, after serving as the organization’s associate director, and as an employee of Catholic Relief Services. He has a doctorate in the field of “leadership studies” from Gonzaga University.

In 2006, he told The Fig Tree newspaper that his understanding of the “the core values of the Catholic tradition, values shared by most other traditions—Buddhist, Muslim, Jewish and other faiths, as well as other Christian,” namely “respect, compassion, collaboration and justice,” animate his approach to Catholic charity.

Catholic Charities of Eastern Washington is a distinct entity from the Diocese of Spokane. Bishop Daly sits on the board, but is not the chairperson. In 2018, the latest year for which date is available, the organization ran a budget deficit of $614,836.

Daly concluded his letter with a prayer “that Jesus Christ, the Divine Physician, will heal any divisions that yet might persist among us.”