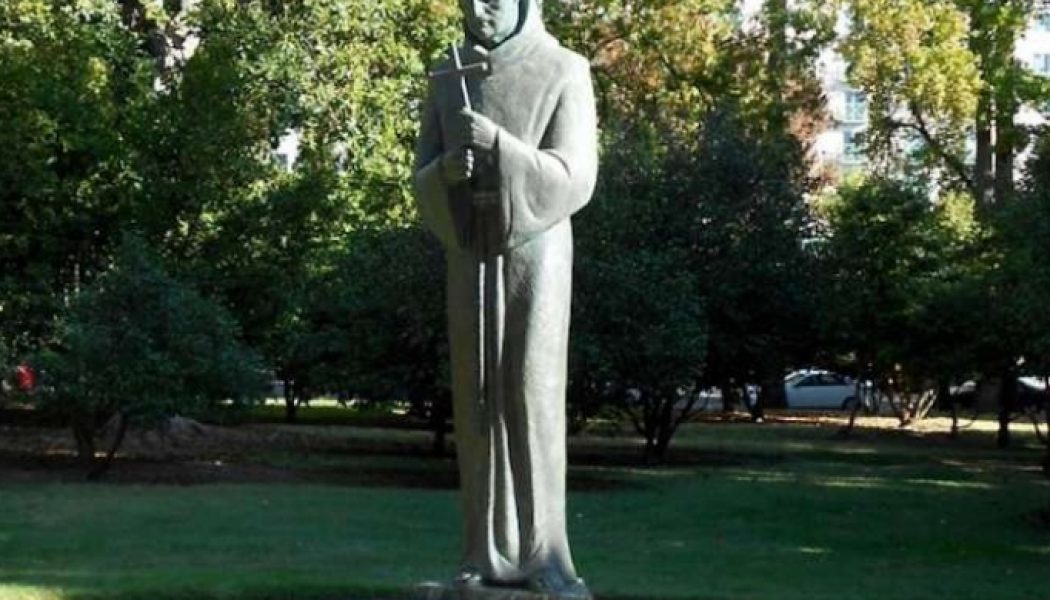 The statue of St. Junipero Serra outside the California State Capitol. (Wikimedia (CC BY 3.0).)

In a July 5 statement, Bishop Jaime Soto of Sacramento said that while “the group’s actions may have been meant to draw attention to the sorrowful, angry memories over California’s past,” their “act of vandalism does little to build the future.”

SACRAMENTO, Calif. — On the evening of Independence Day, a crowd in Sacramento tore down a statue of St. Junipero Serra, set fire to it, and beat it with sledgehammers.

The statue, on the grounds of California’s state capitol, was the third figure of the missionary saint to be torn down by crowds in California in recent weeks. Sacramento’s bishop responded by saying that Serra worked to promote the dignity of indigenous people.

A large crowd gathered around the statue in Capitol Park at around 9 p.m. on July 4, according to media reports.

One man burned the face of the Serra statue with an ignited spray from an aerosol can, before it was pulled from its base using tow straps. After the statue fell, members of the crowd struck the statue with a sledgehammer and other objects, dancing and jumping upon it.

In a July 5 statement, Bishop Jaime Soto of Sacramento said that while “the group’s actions may have been meant to draw attention to the sorrowful, angry memories over California’s past,” their “act of vandalism does little to build the future.”

“There is no question that California’s indigenous people endured great suffering during the colonial period and then later faced the horror of government-sanctioned genocide under the nascent State of California. This legacy is heartbreaking. Yet, it is also true that while Fr. Serra worked under this colonial system, he denounced its evils and worked to protect the dignity of native peoples,” Bisho;p Soto said.

“Understanding the efforts of Fr. Serra to bring light into the bitter, bleak darkness of colonial ambition is the difficult task of history. So is the present arduous work to chart the future with hope. The strenuous labor of overcoming the plague of racism should not be toppled by nocturnal looting. Dialogue should not abdicate to vandalism. Nor should these unnerving episodes distract us from the duties of justice and charity upon which a better California can be built.”

“All monuments are imperfect as are our efforts to live up to America’s founding ideals. The primary task is to build up our community, not tear it down,” the bishop added.

The Sacramento Bee reported that some protestors on the Capitol grounds carried signs saying “decolonize the streets,” and that advocates of the Black Lives Matter movement and American Indian Movement referred amid their protests to Independence Day as the “Farce of July.”

The California Highway Patrol is reportedly investigating the statue’s toppling.

The statue was installed on the state capitol grounds in 1965. At the base of the statue is a map of the 21 missions founded by Franciscan missionaries to California in the eighteenth century.

Serra, a Franciscan priest, has become a target of California vandals amid Black Lives Matter protests in recent weeks, even while biographers say the missionary was an advocate for the rights of native people.

A statue of Serra was torn down by demonstrators in San Francisco’s Golden Gate Park on June 19, and one was torn down in Los Angeles on the same day. Other California cities have moved Serra statues to avoid their toppling, or plan to do so.

During the eighteenth century, the saint founded nine Catholic missions in the area that would later become California.

Serra helped to convert thousands of native Californians to Christianity and taught them new agricultural technologies.

Critics have lambasted Serra as a symbol of European colonialism and said the missions engaged in the forced labor of Native Americans, sometimes claiming Serra himself was abusive.

But Serra’s defenders say the priest a was actually an advocate for native people and a champion of human rights. They note that he often found himself at odds with Spanish authorities over treatment of native people, and the outpouring of grief from native communities at his death.

“Evil has made itself present here. So we have gathered together to pray for God, to ask the saints…for their intercession, above all our Blessed Mother, in an act of reparation, asking God’s mercy on us and on the whole city, that we might turn our hearts back towards him,” Cordileone said in a June 27 video.

“The presence of so many wonderful people here was of great comfort for me,” the archbishop said. “I feel such a great wound in my soul when I see these horrendous acts of blasphemy disparaging the memory of Serra who was such a great hero, such a great defender of the indigenous people of this land.”

Cordileone said the San Francisco statue was “blasphemously torn down”

“An act of sacrilege occurred here. That is an act of the Evil One,” he said in the video.

Los Angeles Archbishop Jose Gomez wrote June 29 that “The real St. Junípero fought a colonial system where natives were regarded as ‘barbarians’ and ‘savages,’ whose only value was to serve the appetites of the white man. For St. Junípero, this colonial ideology was a blasphemy against the God who has ‘created (all men and women) and redeemed them with the most precious blood of his Son.’”

“He lived and worked alongside native peoples and spent his whole career defending their humanity and protesting crimes and indignities committed against them,” he said. “Among the injustices he struggled against, we find heartbreaking passages in his letters where he decries the daily sexual abuse of indigenous women by colonial soldiers.”

For his part, Soto wrote July 5 that Serra’s “holiness as a missionary should not be measured by his own failures to stop the exploitation or even his own personal faults.  Holiness, in the end, is more a result of God’s grace and our willingness to cooperate with His mercy.”