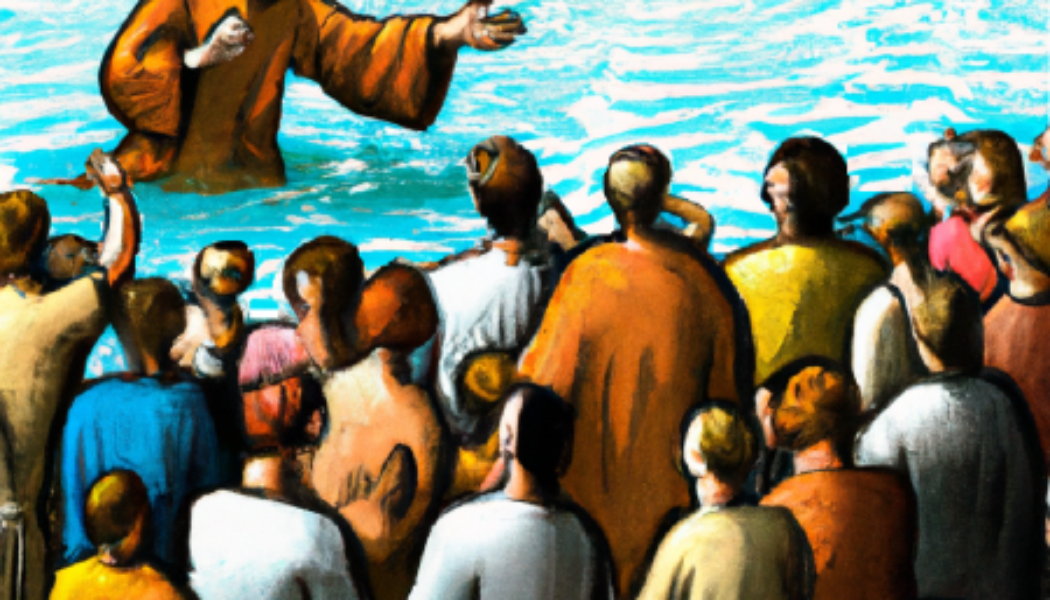 Preceding Jesus’ public ministry, St. John the Baptist appeared preaching in the Judean wilderness. People from Jerusalem, all Judea, and the Jordan River region were going out to see him. John said, “Repent, for the kingdom of heaven is at hand!” The crowds regarded him as a prophet and were being baptized by him as they acknowledged their sins. Like a bath which cleanses one’s outer self of dirt and odor, John’s baptism was an appeal to God for an inner self cleansed from sin. John’s ministry prepared for Jesus Christ and foreshadowed Christian baptism. The Jordan River in which John baptized embodies an allegory whose symbolism remains important for us today.

The fresh waters of the Jordan River originate in the north from the living Sea of Galilee, a large lake full of fish and ringed by trees. The Jordan’s waters flow south and come to one of either two notable ends. Most of the river’s water just goes with the flow. It flows downhill (as all rivers naturally do) ultimately descending seven hundred vertical feet. These waters remain on the edge of the Promised Land without entering in. And at the end of their journey, they empty out into the Dead Sea. The Dead Sea is the lowest place on the face of the earth. After the river drains there, the water has nowhere else to go. As it evaporates to nothingness, the water leaves behind trace amounts of salt which over many, many millennia has made that sea ten times saltier than the oceans. In this oppressive saltiness, no plants nor fish can live. The Dead Sea is thoroughly dead.

Some of the Jordan River’s water, however, does not simply go with the flow downhill. This water escapes the fate of the Dead Sea, by giving itself to the Promised Land. This water enables life and generates fruit among many trees in an otherwise arid place. Jeremiah the Prophet writes of a tree planted beside the stream: “It does not fear heat when it comes; its leaves stay green. In the year of drought it shows no distress, but still produces fruit.” And the 1st Psalm likewise says: “a tree planted near streams of water… yields its fruit in due season; its leaves never wither.” These baptismal waters are willed by God to give life and bear fruit for the Promised Land.

Most of John the Baptist’s contemporaries were convinced he was a prophet, yet the Jewish religious leaders disbelieved. When John saw many Pharisees and Sadducees coming to his baptism, he admonished them: “Produce good fruit as evidence of your repentance! … Every tree that does not bear good fruit will be cut down and thrown into the fire!” It would not be enough (for them or us) to just say the right things and go through the motions. Our faith and repentance must be real, producing of good fruit.

As the life-giving Sea of Galilee is the River Jordan’s source, so God above is the source of every spiritual grace and good thing in creation here below. Having received Christian baptism, we can respond in one of two ways on this life’s journey. In this world, we can go with the natural flow of things, descending more and more, ending in the dead abyss without entering the Promised Land. But that is not Jesus’ will for us. As G.K. Chesterton once observed: “A dead thing can go with the stream, but only a living thing can go against it.” Jesus wills for us to cooperate with him, to be changed, and to change the world around us. So believe in the Lord, acknowledge your sins and repent, and bear good fruit with Christ. What is one area — just one thing — one habit or virtue, you can acknowledge today and grow in throughout this Advent season with the grace of God?

This entry was posted on December 4, 2022 at 2:35 pm and is filed under Faith, G.K. Chesterton, Homily, Parables, Repentance, Salvation History, St. John the Baptist, Sunday Homilies. You can follow any responses to this entry through the RSS 2.0 feed. You can leave a response, or trackback from your own site.

Here are the greatest geek gifts ever created by mankind!. Open template in word……. It perfectly represents my vision, as a fun, welcoming, and friendly brand.