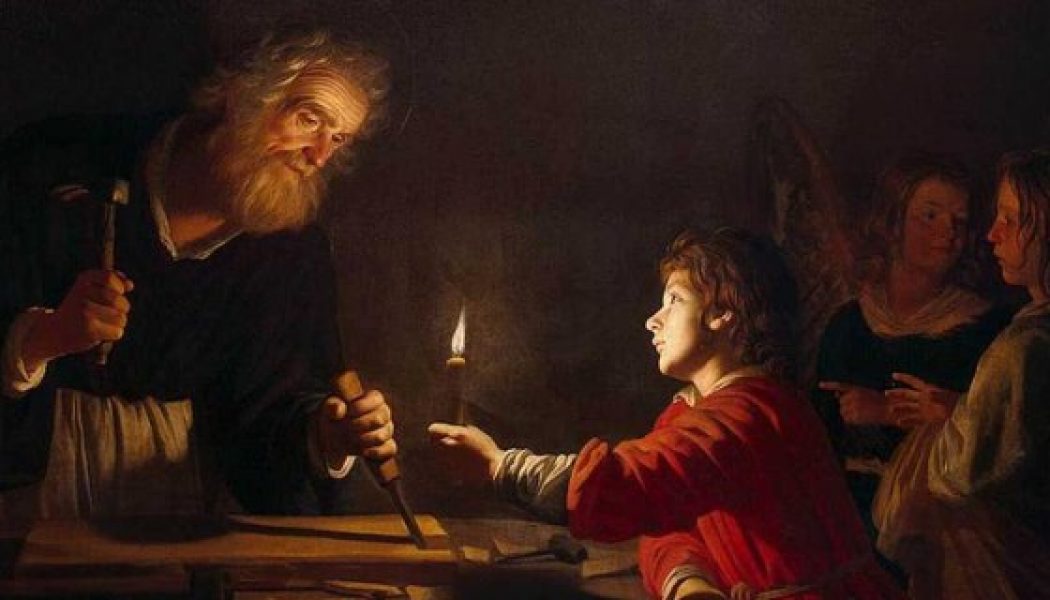 The feast of St Joseph the Worker falls on May 1, this Saturday (also a First Saturday), following the Solemnity of St. Joseph, which we celebrated on March 19. This is a relatively modern feast day since it was only instituted in 1955, during the pontificate of Pope Pius XII.

The intention was that it should be a Christian alternative to the celebration of what was known as International Worker’s Day. This was originally promoted by the International Labor movement as a celebration of the working classes, and the date was chosen in 1889, in Paris, by the Second or Socialist International, a federation of trade unions and socialist groups, ostensibly with the aim of campaigning for an 8-hour work day.

That in itself was a good aim, since excessive working hours are very harmful to the health of the individual and family life generally, but Marxist socialism also had a hidden agenda, that of promoting more radical communist and socialist ideas.

In later years, May Day became a focal point for celebrations of communism in staunchly Communist countries, such as the former Soviet Union and China, during which parades of workers and military weapons took place. Today it is still celebrated in many countries around the world, often as a public holiday.

Although Pope Pius XII actually initiated the feast day, it could be said that his predecessor, Pius XI, laid the groundwork for this in his encyclical on communism, Divini Redemptoris, (“The promise of a Divine Redeemer”) which was published, significantly, on March 19, 1937, the Solemnity of St Joseph.

In this, the pope lamented the fact that a situation had been reached in world history in which, “Entire peoples find themselves in danger of falling back into a barbarism worse than that which oppressed the greater part of the world at the coming of the Redeemer.”

He further pointed out that he was referring to the danger from “Bolshevistic and atheistic Communism,” which, he added, “aims at upsetting the social order and … undermining the very foundations of Christian civilization.”

It is worth bearing in mind that this encyclical was issued following the persecutions of Christians, which had taken place in Russia and Mexico, and were at that point taking place in Spain.

Pius XI then recounted how the Church had for nearly a century opposed this new movement, and how previous popes such as Pius IX and Leo XIII had condemned it.

Pope Leo was also responsible for the encyclical Rerum Novarum, which was published in 1891, and which upheld the right to private property and also the rights of workers to join unions, while at the same time condemning both socialism and unbridled capitalism.

Pope Pius XI described communism as “a false messianic idea,” which was leading people astray with delusive promises; moreover, one based on an atheistic materialism that completely denied the existence of God. However, he argued, the result of its implementation only leads to the removal of mankind’s liberty and individual dignity, and also of all moral restraint.

The pope further described communism as a “system full of errors and sophisms,” which is “in opposition both to reason and to Divine Revelation.” He also criticized it because it “subverts the social order, because it means the destruction of its foundations; because it ignores the true origin and purpose of the State; [and] because it denies the rights, dignity and liberty of human personality.”

Among others things, he saw the rapid spread of communism as due to its promises of a “betterment of the condition of the working classes,” along with the increasing degree of de-Christianization of the world. The pope pointed out that the Church had long championed the rights and dignity of labor as well as the need for a just wage for workers in order that they could properly support their families.

Pius XI rounded off the encyclical by saying that in order to ensure peace and the ultimate victory of the kingdom of Christ in the world, he was placing the “vast campaign of the Church against world Communism” under the “Standard of St. Joseph,” since the saint had belonged to the working class, and had, as a member of the Holy Family, experienced poverty himself. The pope also stated that St. Joseph had, “in a life of faithful performance of everyday duties, … left an example for all those who must gain their bread by the toil of their hands.”

Pope Pius then, in this encyclical, called attention to St. Joseph as the ideal workman and the Guardian and Protector of the Church and, indeed, everyone; thus he presented him as a most suitable patron for the Church’s campaign against communism.

Furthermore, if we go back to the time of Christ, we can see another probable reason why the pope chose St. Joseph for this role. In those days in the Roman Empire, manual work was looked down upon by the ruling classes as being something only fit for slaves. Part of the mission of Jesus, in living the life of a simple workman, a carpenter during His life in Nazareth, was to restore manual labor to its rightful dignity. And in doing this His teacher was His foster father, St. Joseph.

However, despite the warnings from Pope Pius XI, the threat from communism continued during the ‘40s and ‘50s, as the Cold War between Soviet Communism and the West intensified. Thus, Pope Pius XII felt it was opportune to institute a feast day in opposition to the increasingly socialist-dominated May Day celebrations.

With regard to the nature of work, he also wanted to raise people’s minds above the purely materialistic ideas of communism and point to the spiritual dimension, which work ought to have. Work in the world is a way that we can emulate God the Creator, who “labored” at the work of creation.

St. John Paul II, too, was keen to emphasize the dignity of human work, particularly in his encyclical Laborem Exercens, which was published in 1981, the 90th anniversary of Rerum Novarum.

As regards Fatima, we can contrast the way that recent popes have insisted on the dignity of labor and of workers generally, as opposed to the reality of communism, which in its camps and gulags reduced men and women, made in the image and likeness of God, to an inhuman slavery. This terrible evil has been the partial working out of Our Lady’s words on July 13, 1917, that “Russia would spread its errors throughout the world.”

Just as the message of Fatima is a beacon of light for both the Church and the world, so also the role of St. Joseph, as both a worker during his earthly life and now as the heavenly patron and guardian of workers and, indeed, everyone, was emphasized in his appearance to the young seers at Fatima. This took place during the final apparition on October 13, when, while the great crowd at the Cova da Iria was experiencing the miracle of the sun, Jacinta, Francisco and Lucia saw St. Joseph with the Child Jesus blessing the world.

In this Year of St Joseph, we need to turn to him and ask him to bless our work anew, ourselves, our families and the whole world.

Donal Anthony Foley is the author of a number of books on Marian Apparitions, and maintains a related web site at www.theotokos.org.uk. He has also written two time-travel/adventure books for young people, and the third in the series is due to be published later this year – details can be seen at: http://glaston-chronicles.co.uk