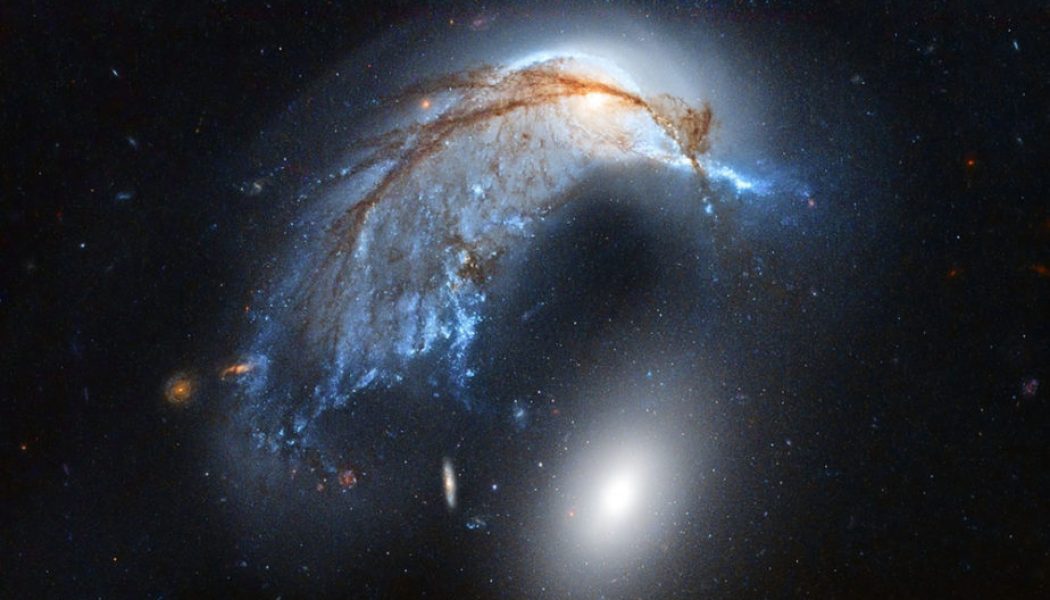 In his Life of St. Augustine, the 5th-century bishop Possidius tells us that the greatest of the Latin Doctors of the Church, knowing that his earthly end was near, had four penitential psalms copied and hung on the walls of his room.  “From his sickbed,” Possidius writes, Augustine “could see these sheets of paper…and would read them, crying constantly and deeply.” It was an act of deep piety that we all might ponder ways to emulate.

Were I to do something similar, however, I might add Psalm 42 (“Like the deer that years for running streams, so my soul is yearning for you, my God/My soul is thirsting for God, the God of my life; when can I enter and see the face of God?”) – and a few color prints from Astronomy Picture of the Day, an extraordinary project of the National Aeronautics and Space Administration, available for free at apod.nasa.gov. NASA has come in for a lot of (justified) criticism in recent years. By contrast, Astronomy Picture of the Day is a service for which I’m delighted to pay federal taxes. Every day, it provides me a preview of what I hope to see post-mortem: the glory of God declared in a display of astronomical wonders that vividly illustrate the extravagance of the divine creativity.

Astronomy Picture of the Day lifts my spirits, which is why I try to accompany morning prayer with a visit to the site. For a brief glimpse of the visual feast that awaits anyone similarly inclined, let me suggest four recent gems, available at the “archive” tab at apod.nasa.gov.

On April 25, APOD and the Hubble Space Telescope offered a brilliantly-hued panorama of the “Cosmic Reef” within the Large Magellanic Cloud, 160,000 light years away. On May 15, APOD featured two dancing galaxies 12 million light years away, which, as the brief explanation following the striking image notes, “have been locked in gravitational combat for a billion years” – a dance that “in the next few billions years” will lead to a cosmic merger. On June 1, APOD introduced me to the “whirlwind of spectacular star formation” happening within the Lagoon Nebula, captured in resplendent magenta by Hubble at a distance of 5,000 light years.

And then there was the most extraordinary of this lot: Hubble’s dazzling color portrait of the “Porpoise Galaxy,” which APOD posted on May 10. The description of how this fantastic phenomenon came about is worth quoting: “Just a few hundred million years ago, NGC 2936, the upper of the two galaxies shown, was likely a normal spiral galaxy – spinning, creating stars – and minding its own business. But then it got too close to the massive elliptical galaxy NGC 2937…and took a dive. Dubbed the porpoise galaxy for its…shape, NGC 2936 is not only being deflected but also being distorted by the close gravitational interaction. A burst of young blue stars forms the nose of the porpoise….while the center of the spiral appears as an eye. Alternatively, the galaxy pair…look to some look to some like a penguin protecting an egg.”

The marvels archived at APOD suggest more than the possibility of a post-mortem galactic Grand Tour, however. They suggest that the burden of proof ought to be on those who insist that all this grandeur is mere randomness: the accidental by-products of a Big Bang from which what we now know as “the universe” was born. Really? Just an accident, if a happy accident? But while we’re on the subject, how did the Big Bang, so to speak, bang? And if what we know as “the universe” evolved from that primordial eruption, what accounts for the high-density, high-temperature primal material that burst into an expanding universe? To suggest that it, too, was an accident, something that just happened, begs a host of questions: beginning with, how can something come from nothing?

The notion that we live in an accidental universe, one that need not be, has had ugly effects in modern history. It suggests that we’re accidents, too, mere embodied stardust. That dumbed-down notion of the human has underwritten a lot of the awfulness of the last two centuries. Astronomy Picture of the Day hints at a different story: none of this is accidental and thus ultimately meaningless. And that includes you, me, and all those who study the heavens and give us the gift of their work.