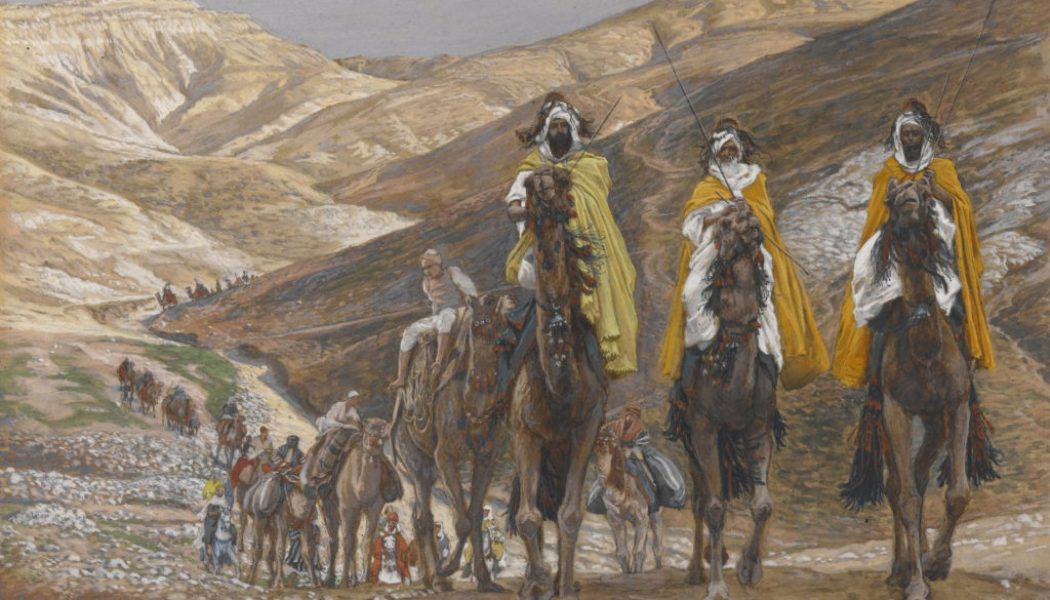 On Sunday, we celebrate the Epiphany, or manifestation of Christ to the Gentiles, in the persons of the Magi, or wise men, whose presence is one of the most mysterious aspects of the whole nativity story.

St. Matthew introduces
the Magi in his Gospel as wise men from the East who have come to Jerusalem in
search of the newborn King of the Jews. We are not told where they came from or
how many they were, but are informed that their arrival caused a stir in Herod,
and “all of Jerusalem with him” (Mt 2:3). We also learn that it is Herod who
assembles the chief priest and scribes to learn more about where the Messiah is
to be born and directs the Magi to Bethlehem.

So who were the wise men?

The Greek word for “wise
men” is “magi.” In the ancient East, this was the name given to teachers,
priests, astrologers, seers and so on, and although it can be understood in a
negative sense, clearly with the Magi of the Gospel we are dealing with
well-disposed seekers after truth.

From Matthew’s Gospel
it is clear that they associated the unusual star they had seen in their
homeland with the newborn King of the Jews in a very precise way. It is
probable that they came from either Persia, that is modern Iran, or ancient
Babylonia, that is modern Iraq. They were probably Medes, members of a priestly
caste who practiced religious rites connected with Zoroastrianism, and were
familiar with astronomy such as it was then practiced.

It is also possible
that the Magi were familiar with the Hebrew Scriptures, since the Prophet
Daniel had lived in that area centuries before. In particular, they may have
been familiar with the prophecy of Balaam on the future coming of the Messiah,
which is recorded in the Book of Numbers: “I see him, but not now; I behold
him, but not nigh: a star shall come forth out of Jacob, and a scepter shall
rise out of Israel …” (24:17).

Regarding the star, it
was most probably a strictly supernatural sign rather than a natural heavenly
object, or objects, such as a supernova or a conjunction of planets, since we
are told that “the star which they had seen in the East
went before them, till it came to restover
the place where the child was” (Mt 2:9).

Obviously, exploding stars, or planets, do not move in such a fashion,
so it must have been a supernatural sign, and meant only for the Magi.

In any event, they were clearly men possessed of great faith and
fortitude in order that they should have commenced on such a long and perilous
journey, probably a distance of well over a thousand miles, which would have
taken many months, undertaken on camels, according to tradition. Upon their
arrival in Bethlehem, they might well have expected to find the new king in a
royal court, or a splendid palace, rather than a humble dwelling.

But their faith was so strong they ignored any such preconceived notions
and instead fell down before the Child and worshiped him, presenting gifts of gold, frankincense and myrrh.
These gifts indicate the Magi recognized the royal dignity of the Christ, and even
more, possibly His divinity. For gold has traditionally been interpreted as a
recognition of Christ’s kingship, frankincense a sign of His divinity, and
myrrh symbolic of His death.

The identification of
gold with royalty is a frequent theme in the Bible, and even today, incense is
burned as a recognition of the divine presence, as at Benediction of the
Blessed Sacrament. Myrrh was used in the ancient world for embalming the dead,
as when Nicodemus brought a mixture of myrrh and aloes for the burial of Jesus
(Jn 19:39).

The Magi were representative of the Gentiles, just as the shepherds were
representative of the Jewish people. According to tradition, they numbered
three, and their names were Gaspar, Melchior and Balthasar. The tradition that they were kings
probably comes from Psalm 72, where we read: “May the kings of Sheba and Seba
bring gifts! May all kings fall down before him, all nations serve him!” (Ps
72:10-11) Sheba and Seba are areas in the East.

A tradition has come down to us that they were later martyred as followers of Christ, and that their bodies were brought to Constantinople from Persia by St. Helena, the mother of the Emperor Constantine, before being brought to Milan, and finally, to Cologne in Germany. Their magnificent gilded reliquary, which dates from the 12th century and which is the largest in the Western world, is housed in Cologne Cathedral.

So we celebrate the
manifestation of Christ to the Gentiles in the persons of the three Magi.

In 1917, there was
another “manifestation” when Our Lady appeared to the three shepherd children
in Fatima. They had no costly gifts, but they were able to offer her their
hearts, minds and bodies in a sacrifice, which was very pleasing to God. During
this Christmas season, we can do the same when we contemplate the Christ Child,
with Our Lady and St. Joseph, and offer ourselves to Him.

Donal Anthony Foley is the author of a number of books on Marian
Apparitions, and maintains a related web site at www.theotokos.org.uk. He has also written two time-travel/adventure
books for young people, and the third in the series is due to be published
later this year – details can be seen at: http://glaston-chronicles.co.uk