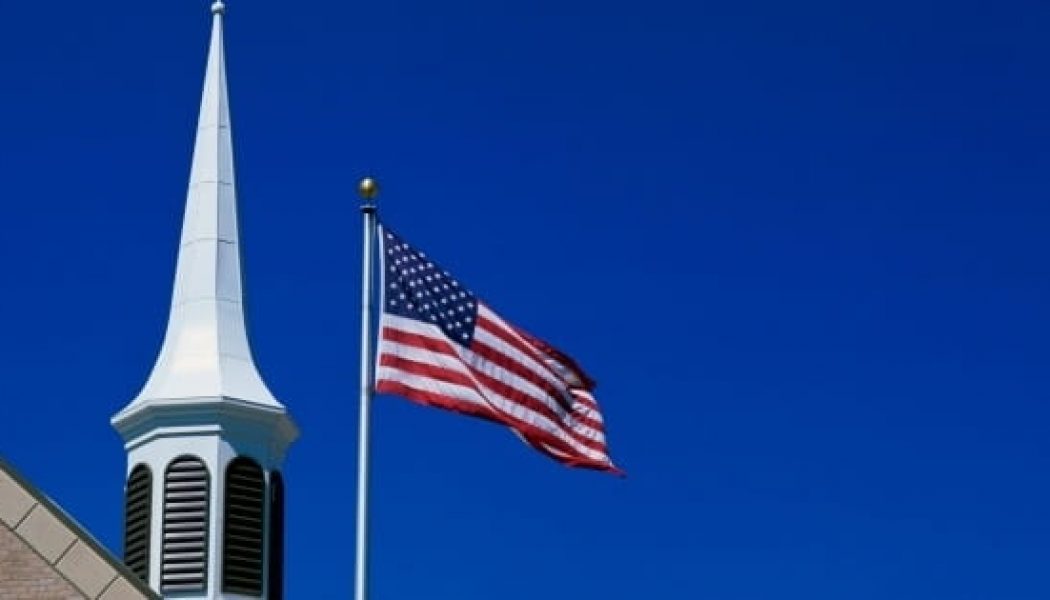 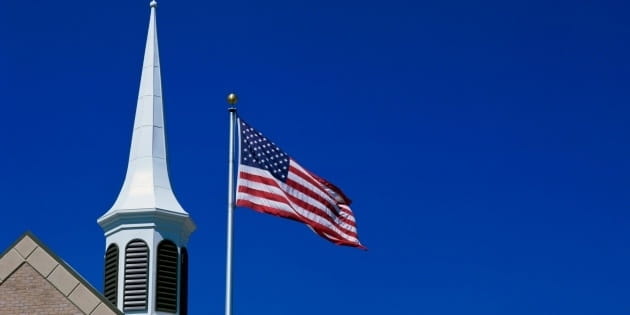 I’ll never forget the first time I stepped into the magnificent Tenth Presbyterian Church as a new intern. Hanging all around the top balcony of the worship room were flags from so many different nations in the world. As I stood there witnessing what was part of the preamble to an incredible mission conference, one of the pastors on staff asked me a question that I had never been asked before: “What do you think,” he said, “about having an American flag behind the pulpit in the church building?” Being caught off guard, I quickly responded, “I haven’t ever thought about it. Why?” What he said next continues to have an impact on my thinking today. “We have so many people from so many different nations of the world living here in Philadelphia that I would hate to give the sense that if you are going to become a Christian, that means that you will be have to become a patriotic American. If a Middle Easterner was invited to one of our services, would we want them to have to identify Christianity with American patriotism?” This very difficult issue is one that the church has needed to work through over the past two decades. In short, how are we—as Christians in America—to hold our Christianity and patriotism together without harming the cause of Christ through our patriotic zeal?

The Scriptures are clear that believers live as citizens of two kingdoms. We live as citizens of the heavenly Kingdom of God—while, at the same time, living as citizens of an earthly kingdom. When the apostle Paul wrote the epistle of Ephesians he wrote it to those who were “in Christ” and “in Ephesus.”  In union with Jesus, believers belong to the nation of Christ—as over against the nation of Adam. Jesus said to the unbelieving Jews of His day—who were citizens of the only manifestation of a theocratic kingdom in redemptive-history: “The kingdom of God will be taken from you and given to a nation bearing the fruits of it” (Matt. 21:43). What “nation” did Jesus have in mind? The Apostle Paul would remind the Gentile believers to whom he was sent that they were the true “Israel” (Gal. 6:16; Rom. 9:6). Although they had once been far off from the promises of Israel in the Old Covenant, now they had been brought near through His blood.  They had been grafted into the only tree, which is Christ (Rom. 11:11-24). This means that the New Covenant church, the true Israel, transcends national identity. No one understood the unsurpassed value of being a member of Christ’s heavenly Kingdom (as over against being a citizen of any earthly kingdom) so well as the Apostle Paul. After his conversion, the most zealous and patriotic of all Israelites became the missionary to the nations. He did so because he realized that there was a heavenly Kingdom that had manifested itself on earth through the preaching of the Gospel.

While the transcendent privilege of belonging to the Kingdom of the Son of God’s love is the supreme blessing we experience in this life, we recognize that there can also be benefits to our living as citizens of earthly countries and cities such as Ephesus. When the Apostle Paul was about to be killed by an angry mob, he appealed to the benefit of being a Roman citizen (Acts 22:22-29). This, in turn, served to protect the Apostle Paul and aid him in carrying out his ministry among the Gentiles. In the same way, it is not wrong for us to appeal to the privileges that we have as American citizens. We have large blessings and should use them to advance the Kingdom of God when appropriate. J.I. Packer, in massively important 1988 article, “The Christian and God’s World: The Battle for America’s Soul,” wrote:

both levels of Divine operation. I might perhaps be able to see this more clearly than a native American every could, simply because I look at it from outside. As a non-American, I do not endorse any form of that Utopian triumphalism, the secular counter-part of the Pilgrim’s hope of building New Jerusalem in Massachusetts, that periodically breaks surface in the American mind and that looks to outsiders so ominously like the pride that goes before a fall. The idea that America is God’s most favored nation, and always will be, is a snare and a delusion that can only sap America’s spiritual strength in a way that Alexander Solzhenitsyn and Malcolm Muggeridge think has happened already. Do not, I beg you, fall victim to any such notion as that.

Nonetheless, I want to go on record as saying to you, and about you…What it boils down to is, that among the larger nations, only the United States has both the manpower and the money to sustain Evangelical world mission for the next generation, and this gives America an uniquely important role in the global strategy of the kingdom of God at the present time.

This, it seems to me, touches the nerve of how we should respond to the freedoms and resources that we have as Americans. We should be grateful for the country that God has placed us in, precisely because the Gospel has been rooted in this country for so long and so many have come to hear about Christ here. We are able to worship the true and living God without fear of persecution because of the freedom that we have here. This has been an unsurpassed blessing in the history of the world. Yet, our patriotism ought not lead us to embrace freedom for the sake of triumphalism or utopian hedonism. The words of the Apostle Paul—while spoken of the Gospel—are nevertheless are to be well heeded in the context of American privilege: “do not use liberty as an opportunity for the flesh, but through love serve one another” (Gal. 5:13). We must never forget that America is not “God’s special country” over against other countries in the world; and that we belong to a greater nation—one that can rightly be called “God’s special people” (1 Pet. 2:9). All of this has massive implications for how we view the privilege we have as American citizens.

I love living in the country in which God has placed me by an act of His sovereign, common grace. There is everything right about loving a country that has provided so much religious and political freedom. There is everything right with thanking God for such large privileges. But, we must never forget that “this is not our home,” and that “here we have no continuing city, but we seek the one to come.” John Piper sums up the matter so well when he says, “Long after America is a footnote to the future world, Christ will reign with His people from every tongue, tribe and nation.” We must always remember that we belong to a greater nation—a spiritual nation made up of brothers and sisters in China, North Korea, England, Germany, Iran, Afghanistan, Ghana, Morocco, Mexico, Brazil, Australia, etc. After all, we will eternally be a chosen nation of believers from every tongue, tribe and people. Our citizenship is in heaven, from which we eagerly wait for the Savior—the Lord Jesus Christ.”