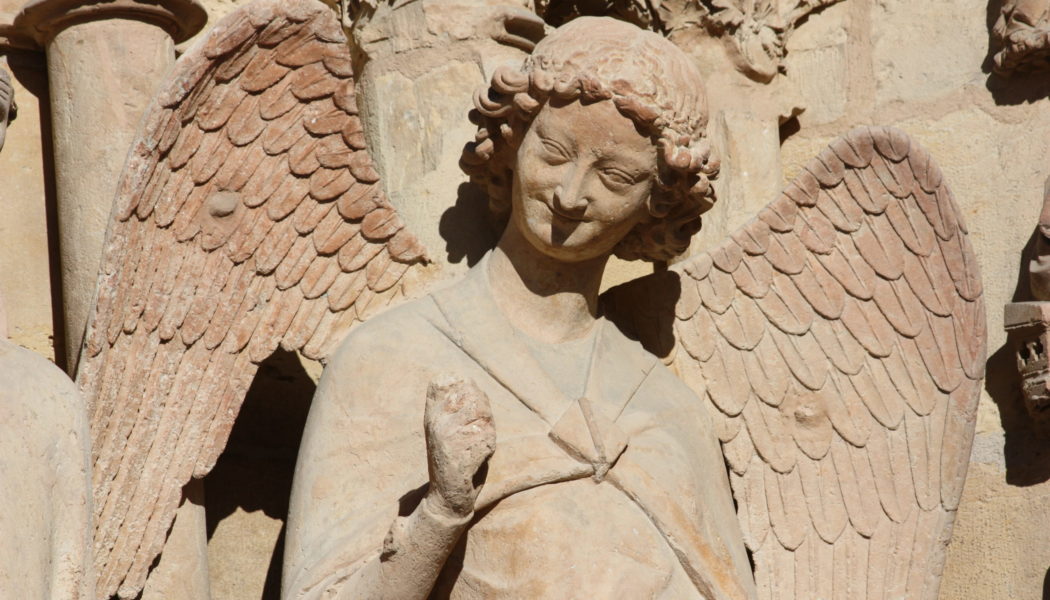 This medieval masterpiece of religious art and the witness of countless coronations of kings of France became the symbol of the Cathedral of Reims and one of the most widespread representations of angel in the world.

REIMS, France — The Cathedral of Our Lady of Reims, with its more than 2,000 sculptures, contains by far the most important statuary of the Gothic cathedrals in the world.

However, enthroned on the north portal of the main façade of this jewel of medieval architecture, the one that is known as the Smiling Angel — or “St. Nicasius’ Angel” — catches in a special way the attention of the more than 1.5 million visitors every year. The story of this enigmatic smiling angel is indeed unique.

Built in the first half of the 13th century, together with the existing cathedral building, the angel was placed next to the statue of St. Nicasius, the bishop of Reims who was martyred in the fifth century. According to some historians, the angel once held a palm of martyrdom in his hand, which he symbolically handed over to St. Nicasius and which was destroyed by the passing of time.

With a large wingspan and wavy hair, right hand and leg suggesting movement, head slightly tilted and a peaceful smile turned toward visitors, the angel sculpture seems to have been designed to offer viewers a glimpse of the beauty and peace of the kingdom of God.

From an artistic point of view, this elegant and expressive angel emerged in France as a particularly original work for its time. Indeed, as Arnaud d’Hauterives, former perpetual secretary of the Académie des Beaux-Arts, pointed out in a 2005 speech, “The Smile in Art,” that smiles deserted Western and Christian art from the fifth century. “It was therefore necessary to wait for the ‘Cathedral of the Smile’ and this angel of Reims so miraculously preserved,” he said, adding that the Gothic sculpture of the 13th century, “symbolizing the reconciliation of man and God, incarnated for the redemption of suffering humanity, integrated an archaic aesthetic.”

Testimony of the Greatest Eras of France’s Christian History

From where it has stood throughout the centuries, the Angel of St. Nicasius has seen the generations pass by and has had an unobstructed view of the events that have irreversibly marked the history of France and Christendom.

A total of 31 kings were crowned in the Cathedral of Reims, which remains one of the most important religious buildings in France. It is also there that St. Remy baptized Clovis I in 496, making him the first Christian king of France, thus initiating the great Christian history of the country, then called the “Eldest Daughter of the Church.”

Devastated by the First World War

Nevertheless, it was not until the First World War that the Smiling Angel gained the fame that we know today, especially since other smiling stone statues adorn the cathedral, in particular that of Gabriel the Archangel, located alongside a rendering of the Virgin Mary on the central portal, and which looks identical.

It was indeed its misfortune that made its face known to the world. As early as September 1914, the cathedral was the target of German bombing. Struck by a beam of a burning scaffolding, the angel was decapitated and its head broken into more than 20 pieces. Such an image of desolation, symbol of the suffering of the people of France devastated by the war, soon appeared on the front pages of newspapers across the planet.

Thanks to the intervention of a priest who meticulously collected the pieces of the mutilated statue, and with the help of a plaster cast of the statue kept at the Musée national des Monuments Français, the unfortunate angel would be entirely restored a few years after the end of the war, in 1926, under the guidance of Henri Deneux and Max Sainsaulieu. The original white and gold paint, erased by the ravages of time, has not been reproduced; the stone has been left in its raw state, like all the other stone statues of the monument.

“Carefully draped under his coat and confident in the beauty of its curls, it seems, wonder among so many wonders, to contemplate the future with serenity,” journalist Marc Blanc once wrote about the newly restored angel.

In the aftermath of the devastating world war, the statue became the cathedral’s emblem, as well as that of the city of Reims itself, attracting an ever-growing number of pilgrims and tourists.

With the city of Reims being the historic capital of champagne, how could its beloved angel, which contributed so much to its prestige in the world, not have a special vintage dedicated to crown its rebirth? This is how the Sourire de Reims brand of sparkling wine was born on the initiative of Henri Abelé, owner of a champagne house and an important patron of the cathedral, who made it a great cuvée, whose bottles are adorned with an image of the famous angel’s luminous smile.

This precious treasure of the cathedral, which recently celebrated its 800th anniversary, was also included in the UNESCO World Heritage list toward the end of the 20th century.

The epic story of one of the most famous representations of our celestial companions inspired the following meditation by the former parish priest of the cathedral, Father Jean-Marie Guerlin:

the stonecutters knew so well how to express on your face

the very smile of God,

to tell the passers who contemplate you

how much God loves them,

how close he is to them!

you have braved all the destructions

to become in our midst