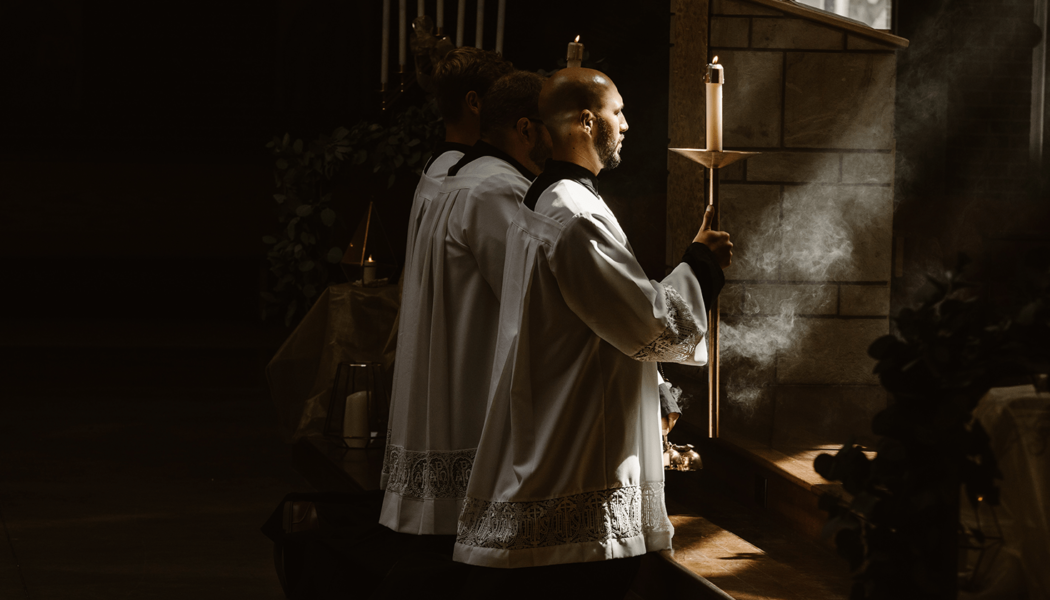 Are you thinking what I keep thinking? Maybe the Church isn’t so great after all. Maybe we have been fools to believe. Maybe it’s time to call it quits.

After all, the ailing Pope had to travel far from home to apologize for the terrible sins of Catholics. His apology was rejected. Many Catholics feel disenfranchised, pushed to the peripheries of the Church over liturgy. Stalwarts who used to defend the faith loudly now loudly denounce it as the Church seems to lionize those who actively work to undermine the right to life and the sanctity of marriage.

This is especially hard, because we need the consolation of the Church more than ever right now. We need it, because overseas, Christians are being persecuted in huge numbers, driven from their homelands or killed. In our cities our churches are being vandalized and pro-life girls assaulted over the right to life while our best efforts seem doomed to failure.

Into this darkness comes Jesus Christ on the 19th Sunday of Ordinary Time with just the right words: “Do not be afraid any longer, little flock. For your Father is pleased to give you the kingdom.”

But it’s a kingdom of love and sacrifice — not power and success.

The apostles knew Jesus was a king, and together they expected to chalk up victories like David and riches like Solomon. Instead, in Sunday’s Gospel passage from Luke, he tells them to “Sell your belongings and give alms.”

The apostles expected to be masters of the masses. He tells them they will be servants instead. “Gird your loins and light your lamps,” he says — in other words, tuck in your tunic to work hard, late into the night.

They expected to start commanding at his side. Instead, he says he will go off to celebrate while they work “like servants who await their master’s return from a wedding.”

That part about returning from a wedding banquet is key. It shows that Jesus has a totally different vision of reality from ours.

We feel sadness and dismay as we watch what is happening on earth. God doesn’t; not in the same way. He knows that he is in control; he knows how his plan will work out in the end.

As Cyril of Alexandria said, “This plainly shows that God always dwells in festivals that are fitting for him. In heaven above, there is no sadness whatsoever since nothing can occasion grief.”

So, when the Lord comes, it will be after celebrating, not after worrying and fretting. He will be in such high spirits, in fact, that “he will gird himself, have them recline at table and proceed to wait on them.”

This is a beautiful image of what God’s love will look like in the Second Coming, but it is also an image of what he looks like this Sunday.

At every Mass, Jesus stands before us in the Eucharist, ready to meet our sadness with his joy. Instead of girding his tunic, though, he comes in a host and a chalice (and in a confessional!), putting himself at our disposal.

We have to be “ready to open immediately when he comes and knocks,” Jesus says in the Gospel. This applies to his coming in “the first watch,” our youth; “the second watch,” our adulthood, or “the third watch,” our old age, according to the Fathers of the Church.

Jesus says, “Blessed are those servants whom the master finds vigilant on his arrival,” whenever it is.

“What is the mark of a Christian?” asks St. Basil the Great. “It is to watch daily and hourly and to stand prepared in that state of total responsiveness pleasing to God.”

Peter asks a great question: “Lord, is this parable meant for us or for everyone?” Jesus’s answer touches on the Church right now.

In reply, Jesus asks: “Who, then, is the faithful and prudent steward whom the master will put in charge of his servants to distribute the food allowance at the proper time?”

He describes two kinds of church leaders: the good kind and the bad kind.

The good kind are vigilant and sober and “distribute the food allowance at the proper time.” That would include food for the body, in works of mercy, and food for the soul, God’s saving message and the sacraments, especially confession and the Eucharist.

The bad kind are lax and indulgent. These clerics lack faith. They think the master “is delayed in coming” and so they abuse the servants and “eat and drink and get drunk.” Some neglect works of mercy, living in luxury while people around them suffer. Some neglect the sacraments, and let confession die in their diocese or parish, leaving the souls in their care to suffer spiritually. They all likely neglect the stern word of warning Jesus has given them to pass on to their flocks. They would rather provide false consolation that hard truths.

What does Jesus say to our modern-day Peter and apostles? “That servant who knew his master’s will but did not make preparations nor act in accord with his will shall be beaten severely.” As for those they neglect, those were left “ignorant of his master’s will but acted in a way deserving of a severe beating,” they “shall be beaten only lightly.”

This sounds harsh to our ears. It is not, say Sunday’s readings, because we have been given fair warning. Consider the Passover.

We know now that Jesus is coming, and we know exactly what to expect. We can follow the example of our forefathers when they were in slavery in Egypt, says the First Reading from the Book of Wisdom. They knew the night of the Passover beforehand “that they might have courage.” Just like them, we await “the salvation of the just and the destruction of their foes,” and we know it is coming.

“Faith is the realization of things hoped for, and evidence of things not seen,” the Second Reading, from Hebrews, explains.

If that sounds like faith is a hunch or a dream, we aren’t reading it right. It says faith is a “realization.” Other translations make it even more concrete with words like “substance,” “assurance,” or “certainty.”

St. Augustine says that we only get this certainty by having real faith, real hope, and real love.

“You do not have your hands on anything when you have them on faith,” he said, but, “nor are they empty if they are full of faith. … Faith does not falter, because it is supported by hope. Take away hope, and faith falters. How, after all, when you are walking somewhere, will you even move your feet, if you have no hope of ever getting there?”

And that is exactly what Jesus is telling his “little flock” about the kingdom he has been pleased to grant us.

When, long after this, after the Resurrection, Jesus gathered the apostles and prepared to leave them at the Ascension, they asked him “Lord, will you at this time restore the kingdom to Israel?”

They had not learned this Sunday’s lesson. If they had, they would have known that he didn’t plan to make them great on earth. He planned to give them poverty, a dangerous mission as sheep among wolves. He planned for them to be imprisoned, tortured and killed for his name. And he planned for them the world as he did, despite it all.

That was the kingdom he was about to hand them. It’s the same kingdom he hands us. It’s the kingdom he rules over from the cross with a royal crown of thorns. We want a kingdom he never promised, better treatment from religious leaders than he got, and consolation on our terms, not his. All of that is a recipe for fear. His kingdom demands a faith that is humble and obedient, a hope that proves itself with action, and a love that accepts suffering and setback.

Does that sound like a bum deal? St. Peter Chrysologus didn’t think so. “The flock is little in the eyes of the world,” he said, “but great in the eyes of God.”

And that, we know with certainty, is the only thing that matters.