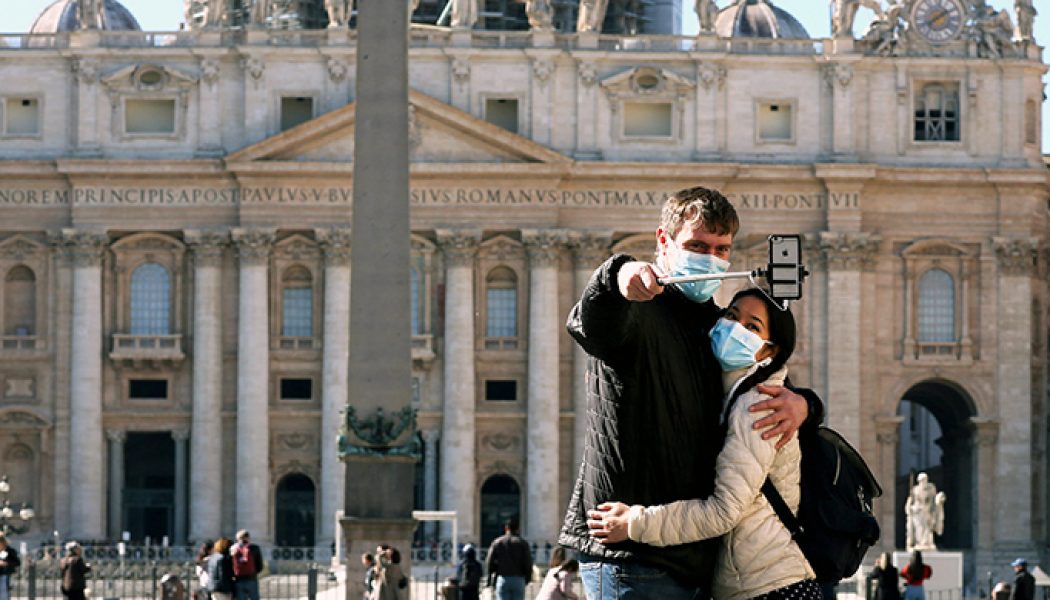 Weekday Masses are suspended in some northern regions, and elsewhere the exchange at the sign of peace is being dropped and stoups have been emptied.

VATICAN CITY — As fears grow that the new coronavirus is turning into a worldwide pandemic and emergency, the Church in Italy is working with government officials on coordinating measures to prevent contagion in what Vatican officials are describing as “uncharted territory” for the Church in the modern era.

In a statement issued March 5, the Italian bishops’ conference continued with restrictions currently in place in Lombardy, Veneto and Emilia Romagna, as well as in three other smaller provinces in the north, all where the most cases have the coronavirus have been recorded.

These measures, which will continue until further revision on March 8, include suspension of Masses in those areas.

On March 4, the Italian government issued a decree mandating the nationwide suspension of events where people must be less than a meter apart from each other. Although this applies to venues such as theatres, the bishops nevertheless reiterated that all Masses continue to be celebrated in unrestricted areas, but as in many dioceses in Europe, the exchange at the sign of peace is being dropped, stoups have been emptied, and for the Ordinary Form of the Mass, priests and bishops are recommending receiving Holy Communion in the hand.

The bishops underlined that in addition to taking these measures, the Church in Italy would be close in prayer to those affected or suffering distress because of the virus, also known as COVID-19, especially the elderly who are most at risk.

The virus is continuing to spread in Italy: As of Thursday evening, 3,858 people had contracted the virus in the country, 769 more cases than the day before, representing a 25% increase in 24 hours.

Of these, 148 have died, 41 more than Wednesday, and 414 have recovered. In the Rome region of Lazio, 44 cases have been recorded and 3 recoveries, with Rome recording its first death from COVID-19 this evening, an 87-year old patient who had respiratory problems.

The virus’ mortality rate in Italy, which has the oldest population in the world after Japan, is greater than Iran and second only to China. The death rate is also higher than first thought: The World Health Organization said this week the rate stands at 3.4%, more than its initial figure of about 2%, and considerably more dangerous than seasonal flu, which kills about 0.1% of those infected.

On Wednesday, the Italian government closed all schools and universities for the next 10 days, including the pontifical universities in Rome, while American universities’ Rome programs have been sending students home, including the University of Mary in North Dakota, which relocated its program to its Arizona campus.

The virus has had a visible impact in the Eternal City, leading to large numbers of tourist cancellations and leaving museums and galleries practically empty. Rome’s tourism sector “has been hit, and hit hard,” Wanted in Rome magazine reported March 5, adding it is a “sad, devastating fact.” But it stressed that the city, and Italy in general, “remains open to tourists” and that restrictions are “limited largely to two northern regions of the country.”

The Vatican announced on Friday morning that a patient being treated by its health service yesterday tested positive for the virus — the first reported case of infection within the Vatican walls.

“This morning all outpatient services of the Health and Hygiene Directorate of Vatican City State were temporarily suspended in order to sanitize the environment following a positive COVID-19 finding in a patient yesterday,” Vatican spokesman Mattei Bruno said in a statement, adding that the Vatican “is informing the competent Italian authorities and in the meantime planned health protocols have been started.”

On Thursday, Bruni told media  “measures are being studied in the coming days to prevent the spread of COVID-19, to be implemented in coordination with those adopted by the Italian authorities.”

He told the Register on March 5 it was too early to say whether the Pope’s public events will be suspended as a precaution, but that an announcement will be given by Saturday. Bruni said the Holy Father, who has been recovering from a common cold and reportedly tested negative for the coronavirus (the Vatican has not confirmed the test, only that he does not have the virus), is continuing to work at his Santa Marta residence and celebrate morning Mass as usual in the residence chapel.

Vatican officials, meanwhile, say that as the virus continues to spread, it is the first time in since the Spanish flu pandemic of 1918-1919 that the Church has had to deal with an outbreak on this scale, and if the mortality rate figures given by the WHO are correct, it could be considerably worse.

In common with such prudential matters, the Vatican says that for now it is abiding by the principle of subsidiarity and leaving local bishops to decide on any necessary action to take.

Local Churches already have measures to deal with seasonal flu such as making changes regarding the distribution of Holy Communion, suspending the exchange of the sign of peace in order to limit the spread of contagion and ensuring priests, deacons, and extraordinary ministers of Holy Communion practice good hygiene.

During the Ebola virus outbreak in West Africa in 2014, and in the Democratic Republic of Congo in 2018, the local Church suspended administering several sacraments and limited other Church activities to keep the deadly disease from spreading, but continued to assist the sick. Although the Ebola virus is more lethal, its contraction rate is far lower than COVID-19.

Before the advent of modern medicine, the influenza epidemic of 1918-1919 was the last known deadly pandemic on a global scale. An estimated 50 million people died of the Spanish Flu, 675,000 of whom were in the United States.

In Philadelphia, one of the hardest-hit cities, the Church offered buildings as temporary hospitals, and priests and especially religious sisters played an indispensable and heroic role in fighting the flu, bringing patients the Blessed Sacrament and caring for patients, according to the Catholic Historical Research Center of the Archdiocese of Philadelphia.

St. Charles Borromeo also had no qualms about caring for the sick during a 1575-1576 plague that struck Milan and other nearby towns in Lombardy. It later became known as “the plague of St. Charles.” Church historian Roberto de Mattei, writing in Corrispondenza Romana, said St. Charles reproached civil authorities for “having placed their trust in human rather than divine means,” and instead saw the epidemic as a “scourge sent from heaven” requiring spiritual means, namely prayer and penance, to fight it.

St. Charles managed to convince Milan’s governors to change their minds and allow public ceremonies, and so he was able to order three processions “to appease the wrath of God,” De Mattei wrote, quoting biographers of the time.

After various other acts of reparation, the plague ceased in 1577. The scourge was, De Mattei said, “a punishment, but also an opportunity for purification and conversion.”

Such witness during the great plagues of the past was highlighted recently in a column by Bishop Pascal Roland of Belley-Ars in France, who said Christians came together to pray, tend to the sick and the dying and buried the dead.

The bishop said he refused to “give in to the collective panic and to subject myself to the precautionary principle that seems to move civil institutions,” and advised he did not intend to issue any specific instructions for his diocese.

“The collective panic we are witnessing today — is it not indicative of our distorted relationship to the reality of death?” he asked. “Does it not show the anxiety-inducing effects of the loss of God?”

Bishop Roland said he had no intention of closing churches, canceling Masses, eliminating the sign of peace “or imposing a particular way of receiving Communion deemed to be more hygienic (that said, everyone can do what he likes!) because the Church is not a place at risk, but a place of salvation.”

“It’s a place where we welcome the one who is Life, Jesus Christ, and where through him, with him and in him we all earn to be the living,” he said. “A church has to remain what it is: a place of hope!” that does not “fear death.”

“So, do not give in to the epidemic of fear!” Bishop Roland concluded. “Let’s not be the living dead! To quote Pope Francis: Don’t let them steal your hope!”