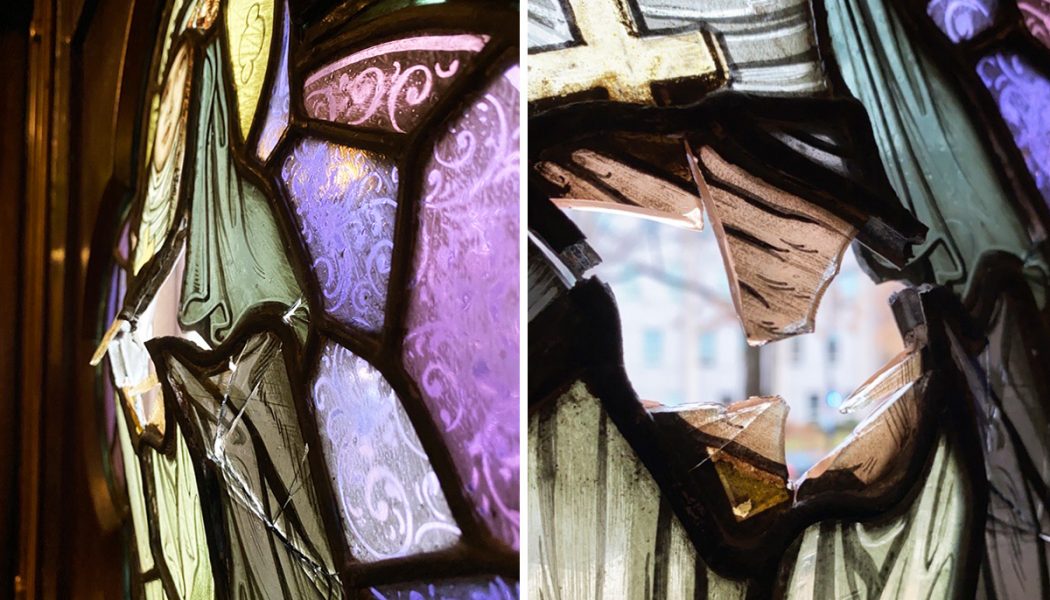 The place of Blessed Michael McGivney’s tomb and the home of the Knights of Columbus suffered damage from Saturday’s vandalism.

On Saturday, Feb. 27, St. Mary Church in New Haven, Connecticut, was the victim of a vandal or vandals. The parish church is also renowned with a shrine of the Infant of Prague and known as the birthplace of the Knights of Columbus. Blessed Michael McGivney, founder of the Knights, is entombed in a sarcophagus in the church.

It was definitely not a matter of trying to break into the church because the damage happened mid-Saturday morning. The church was not locked but open as usual. Some people were inside praying.

Father Walker described how each window “suffered what appears to be a single blunt force blow to the center of the window that has caused each to suffer significant indentation as well as pieces of glass being cracked and knocked to the ground.”

Each of the heavy wooden doors which open into the church’s vestibule pictures one of a quartet of female Dominican saints — St. Catherine of Siena, St. Catherine de Ricci, St. Rose of Lima, and St. Agnes of Montepulciano.

Father Walker described how “there is a lot of damage in terms of the lead being pushed way in. In each, some of the stained glass was cracked and thrown to the ground and vestibule flooring. About one-fifth of the center of each window was punched in and received this severe damage.” While each entire window needs repair, “the edges of these windows are still intact so it does not entail a complete reconstruction.”

This is the first time in his 10 years as pastor of St. Mary’s that such vandalism has happened in this church. However, in July 2020, St. Joseph’s Church which is nearby and also staffed by the same Dominicans at St. Mary’s was spray-painted with graffiti — “satanic” and “anarchist” symbols on its doors.

As heartbreaking as this was, Father Walker urged prayers for the person responsible for the vandalism at St. Mary’s. “Pray for the person who did it,” he said.  “They’re clearly troubled, whether with mental issues or a hatred for the faith or the Church.  Pray for the healing they need and to come to a repentance for what they did” and have a “conversion of heart, that their life might be marked by growth in holiness and virtue, and ultimately for their eternal salvation.”

As for the damaged windows, Father Walker and the parishioners look forward to St. Catherine of Siena, St. Catherine de Ricci, St. Rose of Lima, and St. Agnes of Montepulciano greeting them on the entrance doors as soon as possible.