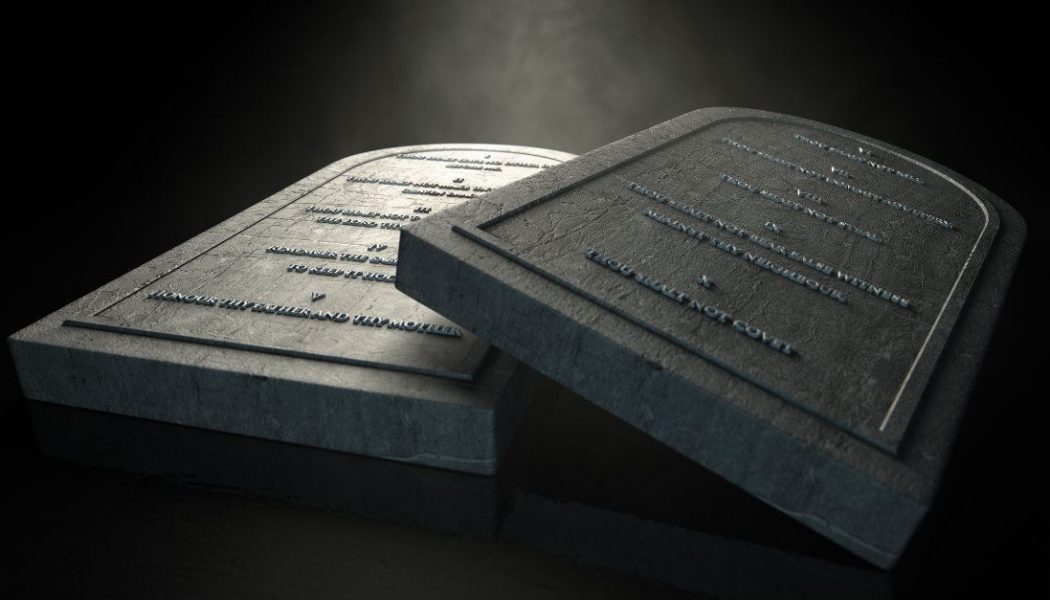 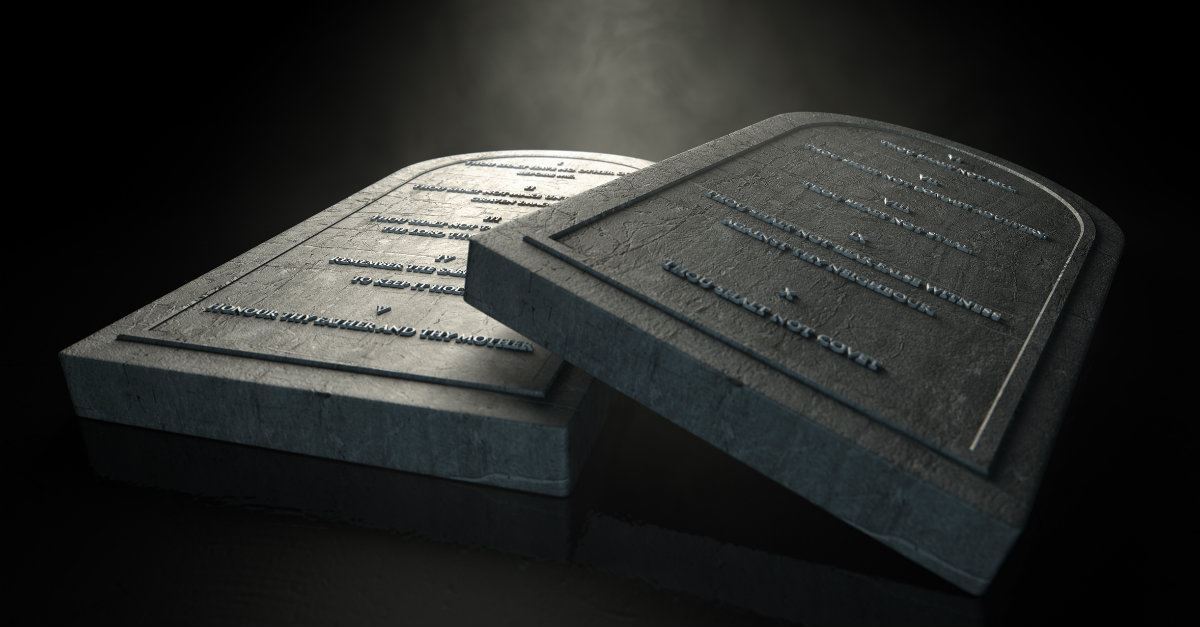 God wrote the 10 Commandments on stone tablets and gave them Moses to share with all the Israelites soon after they left captivity in Egypt (Exodus 20:1-26). Moses reiterated them 40 years later in Deuteronomy 5:1-22 as the Israelites neared the Promised Land.

Though God wrote the 10 Commandments thousands of years ago, they still influence our society today.

Modern Significance of the 10 Commandments

Though Christians do not believe fulfilling the law is required for salvation, they still view the 10 Commandments as the foundation of God’s moral law. Jesus called people to an even higher standard by obeying the commandments not only in their actions, but also in their hearts. For instance, Jesus quoted the command to not commit adultery (Exodus 20:14, Deuteronomy 5:18)

“You have heard that it was said, ‘You shall not commit adultery.’ But I say to you that everyone who looks at a woman with lustful intent has already committed adultery with her in his heart” (Matthew 5:27-28).

What are the 10 Commandments?

Scholars agree that the 10 Commandments, or more literally “10 Words,” are found in Exodus 20:1-26 and Deuteronomy 5:1-22, but they debate the division of the commands because there are more than 10 commands!

In Hebrew scrolls, the text is typically written in a format that is justified in columns.  The 10 Commandments stand out because they are right and left side justified but there are large white spaces in the middle of the text. This “parashah setumah” spacing in the text highlights the importance of these words.

In English translations, a new paragraph is started after each commandment. The unusual Hebrew spacing has led to differences in counting the 10 Commandments in Jewish, Protestant, and Catholic tradition. (See the chart on page 31 of The Ten Commandments Reconsidered.)

Commandments about the Lord God

The first several commandments kept the Lord God as the focus. God created the world and everything in it. He knew what was required for a successful, holy life.

“I am the Lord your God, who brought you out of Egypt, out of the land of slavery.

“You shall have no other gods before me.

“You shall not make for yourself an image in the form of anything in heaven above or on the earth beneath or in the waters below. You shall not bow down to them or worship them; for I, the Lord your God, am a jealous God, punishing the children for the sin of the parents to the third and fourth generation of those who hate me, but showing love to a thousand generations of those who love me and keep my commandments.

“You shall not misuse the name of the Lord your God, for the Lord will not hold anyone guiltless who misuses his name” (Exodus 20:2-7).

The initial commandments start with the relationship with the “Lord your God” (Exodus 20:2). God told his people he was their Lord, Master, and their Creator God. They should have no other gods, and they should not make idols. They should not misuse his name. These commands were a dramatic change from the Egyptian view of deity. During captivity in Egypt, they worshipped Pharaoh and other Egyptian deities like Ra, Anubis, and Osiris.

A Warning against Worshipping Idols

You may have noticed a warning regarding the importance of obeying the commandments; disobedience would result in “punishing the children for the sin of the parents to the third and fourth generation of those who hate me, but showing love to a thousand generations of those who love me and keep my commandments.” (Exodus 20:4-5)

God wanted his people to know that their choice either to obey or disobey his commands would influence their lives and even the lives of their grandkids.

This warning may seem vindictive, but it wasn’t meant to be harsh; any more than warning a kid walking along the edge of a sheer cliff face, “If you get too close to the edge of the cliff, you could fall and break your neck and die.” The warning is not harsh. It is realistic, serious injury is likely in such a dangerous situation. And rejecting God’s commands would have serious consequences.

The Sabbath: Connecting God and His People

“Remember the Sabbath day by keeping it holy. Six days you shall labor and do all your work, but the seventh day is a Sabbath to the Lord your God. On it you shall not do any work, neither you, nor your son or daughter, nor your male or female servant, nor your animals, nor any foreigner residing in your towns. For in six days the Lord made the heavens and the earth, the sea, and all that is in them, but he rested on the seventh day. Therefore the Lord blessed the Sabbath day and made it holy” (Exodus 20:8-11).

God wants us to delight in His Word, enjoy his creation, celebrate beauty and love, and rejoice in the harvest. God intended for his people to enjoy their relationship with Him and each other by valuing the Sabbath.

The Sabbath is set apart to connect with God and with other people. No one was excluded from the command to rest – even foreigners, servants, and livestock were called to take a break from work on the Sabbath. It was to be a blessing for all of creation.

Commandments about Our Relationships with Other People

Leaving captivity in Egypt meant establishing a new society. The law established healthy boundaries based on respect for God and other people, rather than on brute strength.

Read through these laws and imagine how they would help develop a healthy community.

“Honor your father and your mother, so that you may live long in the land the Lord your God is giving you.

“You shall not murder.

“You shall not commit adultery.

“You shall not steal.

“You shall not give false testimony against your neighbor.

Honor Your Father and Mother

Our relationship with our parents is the foundation for our future relationships and choices.  Here’s how Paul explained to new believers in Ephesians that the choice to honor your parents has consequences like enjoying a long life.

“Children, obey your parents in the Lord, for this is right. ‘Honor your father and mother’—which is the first commandment with a promise— ‘so that it may go well with you and that you may enjoy long life on the earth’” (Ephesians 6:1-3).

Parents are their kids’ first teachers. Kids learn to honor their parents by seeing their parents honor God and His commandments.

Living in a healthy community meant respecting others’ boundaries. Lying devalues and disrespects another person by not telling the truth.

God’s people were also commanded to not steal. In a time when “might makes right,” they were to respect each other’s property rights.

Then God commanded his people to not murder. Because people are made in the image of God, life has value.  Murder is an intentional act that says that a person’s life has no value compared to another’s priorities.

An interesting note is that God did not say, “Do not kill.” Hebrew has nuances that take into account the difference between murder and an accidental death or an act of war.

You Shall Not Commit Adultery

God commanded his people to be faithful in marriage and to respect other people’s vows as a model of faithfulness in relationship with God. Adultery devalues the commitment made between a husband and wife and to God. Interestingly, God’s command to not commit adultery was an equal standard for men and women.

In the New Testament, Jesus called his followers to faithfulness in marriage (Matthew 5:27-28, Mark 10:11-12). Paul explained to the Corinthians how to avoid sexual immorality by being faithful to one’s spouse.

“But since sexual immorality is occurring, each man should have sexual relations with his own wife, and each woman with her own husband” (1 Corinthians 7:2).

You Shall Not Covet

Why would God include coveting in the same list as murder, stealing, and adultery?

God knew that coveting a neighbor’s servant, ox, or wife was a steppingstone to ungratefulness and discontentment – even lying, stealing, murder, and adultery. Focusing on what others have diminishes our ability to appreciate the good things in our lives.

Why were there two tablets?

According to Exodus 32:15, God engraved both sides of the tablets. Many people wonder which words were written on the stone tablets and if the first tablet contained commands 1-5 and the second contained 6-10. Other scholars divide the list between the first two commandments and the following eight based on the word length of the text.

The 10 Commandments are evidence of a covenant between God and his people. Some scholars think that both tablets contained identical copies of the same commands just we have two copies of a legal document.

Bar-IlanUniversity, “Counting the Ten Commandments and Writing Them on the Tablets.” Yogev Bar-Gad. 2017.

Portions of this article were inspired by the author’s upcoming book, Seeing Value. 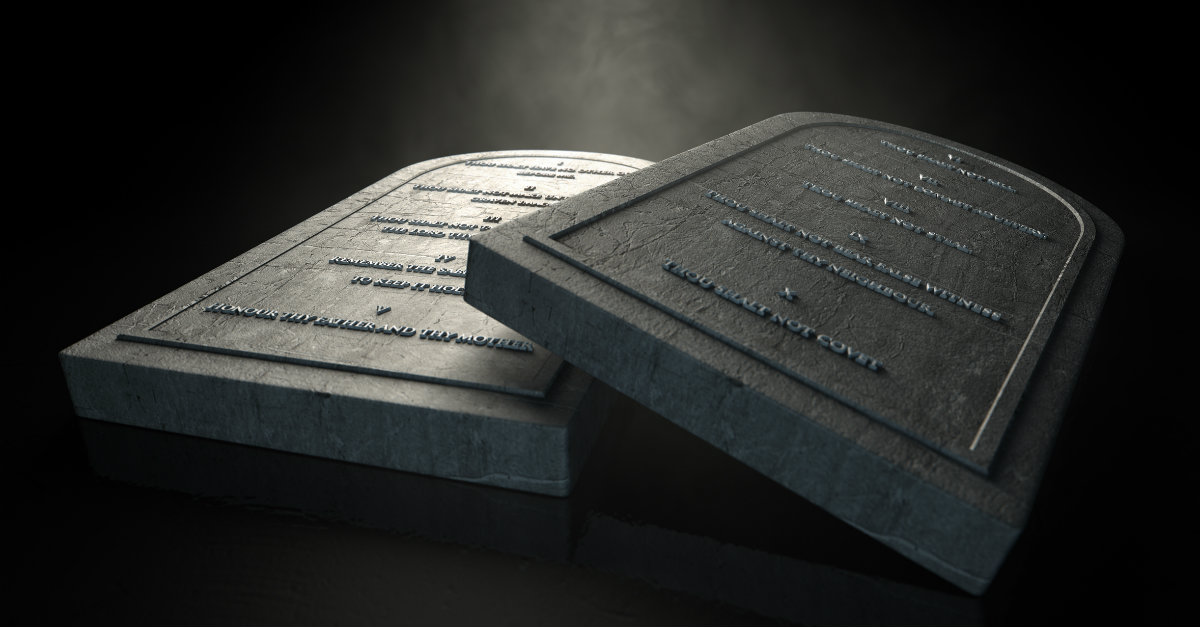