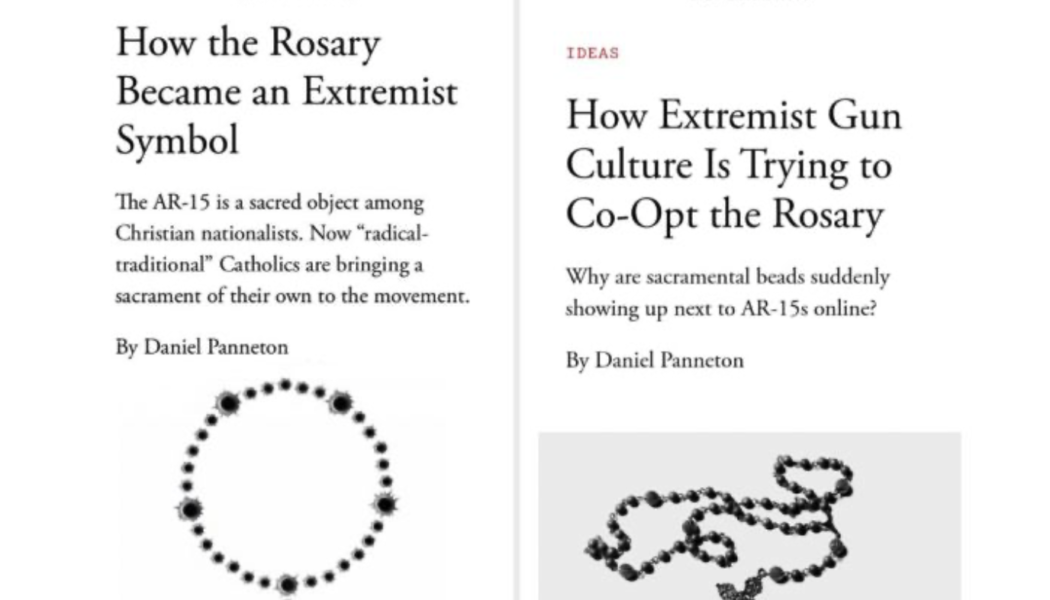 No doubt about it. The early favorite for the wild headline of 2022 has to be “How the Rosary Became an Extremist Symbol” atop that viral feature from The Atlantic. And that now-deleted graphic with the rosary made of bullet holes? That will show up in media-bias features for years (maybe decades) to come.

Yes, I know that the editors tried to tone that down with a replacement headline — but it’s the original screamer that perfectly captured the article’s thesis. Oh, and the editors updated a mistake in the second line of the original headline with that new sub-headline: “Why are sacramental beads suddenly showing up next to AR-15s online?”

So here was the first question in this week’s “Crossroads” podcast (CLICK HERE to tune that in). It’s a question your GetReligionistas have been asking more often in the past decade (even before Orange Man Bad): What WAS this thing? A news feature? A piece of blunt analysis? An opinion screed? And here’s the question I saw several people ask: Did the Atlantic editors set out to publish an anti-Catholic classic?

Why do I think that? Here is the crucial part of the article, from my point of view, starting with the overture:

﻿Just as the AR-15 rifle has become a sacred object for Christian nationalists in general, the rosary has acquired a militaristic meaning for radical-traditional (or “rad trad”) Catholics. On this extremist fringe, rosary beads have been woven into a conspiratorial politics and absolutist gun culture. These armed radical traditionalists have taken up a spiritual notion that the rosary can be a weapon in the fight against evil and turned it into something dangerously literal.

﻿Their social-media pages are saturated with images of rosaries draped over firearms, warriors in prayer, Deus Vult (“God wills it”) crusader memes, and exhortations for men to rise up and become Church Militants. Influencers on platforms such as Instagram share posts referencing “everyday carry” and “gat check” (gat is slang for “firearm”) that include soldiers’ “battle beads,” handguns, and assault rifles. One artist posts illustrations of his favorite Catholic saints, clergy, and influencers toting AR-15-style rifles labeled sanctum rosarium alongside violently homophobic screeds that are celebrated by social-media accounts with thousands of followers.

There’s your first hint, with the crucial word “alongside.” This brings us to the thesis statement:

The theologian and historian Massimo Faggioli has described a network of conservative Catholic bloggers and commentary organizations as a “Catholic cyber-militia” that actively campaigns against LGBTQ acceptance in the Church. These rad-trad rosary-as-weapon memes represent a social-media diffusion of such messaging, and they work to integrate ultraconservative Catholicism with other aspects of online far-right culture.

Now, are the vast majority of pro-Catechism Catholics online and in pews who seek to defend church teachings on marriage, sexuality, the sanctity of all human life (conception to natural death) urging their folks to buy closets of rapid-fire weapons and join militias?

Did this vague, vague language in one of America’s most influential news-and-commentary magazines suggest precisely that? Yes. Is the point that traditional Catholics — these wackos may even go to Confession, attend Latin Masses or favor other traditional forms of liturgy — are digitally adjacent to the bullet-rosary fringe folks? You betcha. That’s the whole Big Idea Here.

Here is another example of how the connection works. Read this carefully:

Like such networks, radical-traditional Catholics sustain their own cottage industry of goods and services that reinforces the radicalization. Rosaries are common among the merchandise on offer — some made of cartridge casings, and complete with gun-metal-finish crucifixes. One Catholic online store, which describes itself as “dedicated to offering battle-ready products and manuals to ‘stand firm against the tactics of the devil’” (a New Testament reference), sells replicas of the rosaries issued to American soldiers during the First World War as “combat rosaries.” Discerning consumers can also buy a “concealed carry” permit for their combat rosary and a sacramental storage box resembling an ammunition can. In 2016, the pontifical Swiss Guard accepted a donation of combat rosaries; during a ceremony at the Vatican, their commander described the gift as “the most powerful weapon that exists on the market.”

﻿    ﻿The militarism also glorifies a warrior mentality and notions of manliness and male strength. This conflation of the masculine and the military is rooted in wider anxieties about Catholic manhood — the idea that it is in crisis has some currency among senior Church figures and lay organizations. In 2015, Bishop Thomas Olmsted of Phoenix issued an apostolic exhortation calling for a renewal of traditional conceptions of Catholic masculinity titled “Into the Breach,” which led the Knights of Columbus, an influential fraternal order, to produce a video series promoting Olmsted’s ideas. But among radical-traditional Catholic men, such concerns take an extremist turn, rooted in fantasies of violently defending one’s family and church from marauders.

OK, I will ask. Is the point of the “but” at the start of that final sentence that the Phoenix bishop and the Knights are NOT part of this dangerous trend or that they are, here’s that word again, merely adjacent to it and thus helping the radicals, perhaps without knowing about it?

What about Pope Francis himself, the man who compared abortion to hiring a Mafia hitman to solve a crisis pregnancy? Or frequently talks about spiritual warfare in battles with the Evil One?

Once again, what is going on here in terms of basic journalism?

As journalist and canon lawyer J.D. Flynn (who is probably within arm’s reach of a rosary at this very moment) wrote at The Pillar (which may be one of those evil online Catholic websites):

… I read this morning about a prominent Catholic television priest who apparently prays with a rosary made of shell casings. If that’s true, it’s pretty weird. Really weird, actually. And, look, there is an online subculture in American Catholicism that seems to be champing at the bit for some Lepanto, ‘militant Church’ moment of rising up against Christian persecution — you can find it easily, and it’s weird too. …

It’s my experience that Catholics for whom martial spiritual language does resonate are usually aiming to become men of peace and virtue, not to run survivalist camps in some rural woods of Michigan. There are exceptions, but they are not the rule.

But the essay is not so careful about its distinctions. … And the fact that a Swiss Guardsman says the rosary is a powerful weapon means he knows that demons are real, not that he’s waiting to slaughter some oncoming force of marauders.

Let me try to find another way to look at the basic journalism question raised by this news feature (and that’s what it was, since The Atlantic team did not label it otherwise). I’ll ask: Is there a radical Catholic fringe that has drifted into contact with right-wing extremists? The answer certainly appears to be “yes.” That’s a valid story. But is this typical of life among pro-Catechism Catholics? No way.

Let’s look at some similar journalism issues in other big news stories.

Is Jane’s Revenge real? Are there violent abortion-rights groups conducting attacks on churches and crisis-pregnancy centers? The answer is “yes,” and that’s something folks in mainstream newsrooms and even at the Department of Justice need to ponder. But are the tactics of these radicals typical of the work done by mainstream political and religious groups that support abortion rights? The answer is “no.”

How about this: Are leather-wearing “pup play” fetishists who show up at Pride marches real and is there any reason to include them in news coverage of LGBTQ life? Well, they are real and, maybe, newsworthy at this moment in time (think New Orleans). But it takes very little effort to find evidence that the mainstream gay community is divided on many of these fringe folks. Are the “puppies” typical? The answer is “no.”

How about the summer of Black Lives Matters? Where the activists who, night after night, turned to illegal violence real? Clearly, “yes.” Were their actions typical of mainstream Black Lives Matter “movement” activists, many of them from Black churches and Civil Rights groups? The answer is “no.”

In conclusion, let me restate my main point. The goal of this deadly rosary news feature was to choose a side in current Catholic debates about the evolution of ancient church teachings that clash with the doctrines of the Sexual Revolution. Weigh this question: Are Atlantic editors worried about the rosary in President Joe Biden’s pocket?

FIRST IMAGE: “Bullet Rosary with Our Lady of Fatima center”, for sale at Etsy.