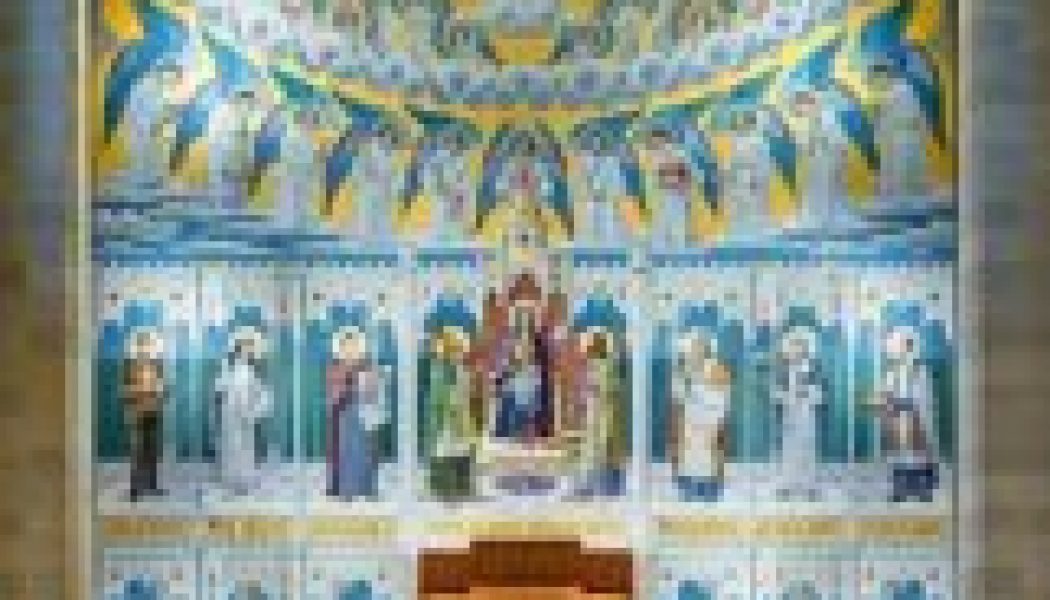 It can seem odd that the current pandemic has led to Masses celebrated by solitary priests in empty churches and bishops celebrating the Easter Vigil without the new fire, procession with paschal candle, or baptism of adults. The sanctification of people, of course, is one of the primary aims of the sacred liturgy, so it may seem pointless at first blush to confect the Eucharist in an empty church, even when people watch from home and make spiritual communions. But a broader sacramental view of the sacred liturgy reveals that Catholic worship is more than a prayer meeting in which people “get” the Eucharist like they get their foreheads marked on Ash Wednesday. Instead, the liturgy is always a perfect offering rendered to the Father by Christ together with his Mystical Body which continues God’s work of salvation and glorification of creation. As Sacrosanctum Concilium expresses it, liturgy is the “exercise of the priestly office of Jesus Christ” (7) which includes all the members of his Mystical Body, both on heaven and on earth.

The Mass, then, is not simply the necessary ritual formalities preliminary to receiving Holy Communion, but it is the participation in Christ’s perfect offering of himself and all of creation to the Father which then culminates in the reception of Holy Communion. As members of his Mystical Body, the laity are meant to offer themselves to the Father with Christ, the Immaculate Victim, allowing a real liturgical participation even when viewing online and substituting spiritual communion for sacramental reception of the Eucharist.

The Process of Creation Continues in Time

In reading scripture’s creation accounts, it can be tempting to assume that God’s work of creation ended on the sixth day, as if the narratives of the Old Testament and the Resurrection of Christ are simply necessary remedies to undo the Fall. But the act of creation can also be seen as God’s continuing activity which occurs over time, beyond the first six days: new children are born and the message of the Gospel continues to be proclaimed in new lands until God’s plan is fully realized. David Fagerberg writes that time is a “creature,” created by God as a tool for redemption. “History,” he writes, “is creation coming out from God and then going back to God…. God made a world with time so we could grow in communion with him.”[1] This glorification continues to happen across time, which makes it also God’s “tool for transfiguration.”[2] In the sacred liturgy this is seen clearly, where people spend time “being” liturgical, allowing God’s glory to transfigure them by offering themselves to the Father with Christ.

The sabbath is the particular liturgical day when Christians assemble to participate in God’s glorification of the world. The Genesis creation accounts speak of human beings created on the sixth day and God resting on the seventh, but God’s creative action did not stop there. Christ’s words, “My Father has never ceased working and I too must be at work” (John 5:17), came precisely in response to his healing a sick man on the sabbath, and provides evidence of God’s continued “work” in the world. For French scholar Jean Hani (1917-2012), this passage explains creation as a “continuous divine activity,” a kind of work which God in turn shares with humanity.[3] To God belongs the archetypal power of continued creation which, in Christ’s Resurrection, now brings all things to glory.

Importantly, human beings participate in this continuous creation, thereby giving labor its foundational dignity. Workers, whether artists, artisans, teachers, or physicians, “act upon the world with a view to transforming” and improving it, thereby extending God’s work in time.[4] After Christ’s resurrection, however, humans “work” in and with Christ, bringing about the “restoration of all things” (Acts 3:21) and uniting earth with the glory of heaven (Ephesians 1:10). In other words, Christ and the members of his Mystical Body together continue God’s work of creation precisely by bringing it to glory until God is “all in all” (1 Corinthians 5:28).

Christ’s Work of Redemption Continues in the Church

While it may be easy to see the Church and her liturgy as just a pious human gathering, the Church is better understood as the privileged place to share in Christ’s continuing redemptive action or “work” in the world through the offering of his sacrifice to the Father. Sacrosanctum Concilium proclaims this idea in its opening paragraphs, noting that especially in “the divine Eucharistic sacrifice… ‘the work of our redemption is exercised’” (2). The Catechism of the Catholic Church reiterates and expands this idea, calling liturgy “the participation of the people of God in the ‘work of God’” and continues: “Through the liturgy Christ…continues the work of redemption in, with and through his Church” (1069). It is worth noting that the Catechism’s explanation of the liturgy requires three prepositions for proper explanation: in, with and through. The Church’s liturgy, then, is spiritually indistinguishable from the action of Christ himself at the right hand of the Father.

In that sense, the Church’s activity sacramentalizes Christ’s activity, and the Church’s many members constitute a body under his singular headship. Pius XII stated this clearly in 1943 in his encyclical Mystici Corporis Christi: “Because Christ is so exalted, He alone by every right rules and governs the Church,” and “it is He who through the Church baptizes, teaches, rules, looses, binds, offers, [and] sacrifices.”[5] The Church, then, “is” Christ acting in time and space, and her liturgy is far more than humans gathering out of dutiful obedience. It is the divine offering of Christ to the Father in the form of a rite: a perfect pleading and a perfect prayer made tangible in time, bringing the redeemed world more and more to its transfigured glory. Pius XII summarized this concept in his 1947 encyclical Mediator Dei:

“The sacred liturgy is…the public worship which our Redeemer as Head of the Church renders to the Father, as well as the worship which the community of the faithful renders to its Founder, and through Him to the heavenly Father. It is, in short, the worship rendered by the Mystical Body of Christ in the entirety of its Head and members.”[6]

Whether celebrated in an empty church or with 10,000 faithful, every Mass is the eruption into time of the eternal offering of Christ to the Father, involving every member of the Mystical Body, both in heaven and on earth. And whether any particular Christian participates most completely through the reception of Holy Communion, the full sacrifice of Christ is offered nonetheless, together with his Mystical Body. Though a great supporter of lay participation in the liturgy, Pius XII was careful to note that, though the fuller participation of laity in the liturgy increased its splendor and revealed its nature, the presence of laity was not necessary “to constitute it as a public act or give it a social character.”[7] While this may at first seem to contradict the Second Vatican Council’s urging of lay participation, a second look reveals a great continuity of thought. Sacrosanctum Concilium reiterated the notion that the sacred liturgy is the “exercise of the priestly office of Jesus Christ,” thereby giving Christ headship and describing the nature of liturgical acts: “every liturgical action, because it is an action of Christ the priest and His Body the Church, is a sacred action surpassing all others” (7).

Mass in the Time of Pandemic

So what does this all mean for people watching Mass through television or social media? Is it simply going through the motions without real effect, especially without sacramental reception of the Eucharist? In one sense, a live-streamed Mass is, in fact, a deprivation of liturgical fullness that can bring heartache. On the other hand, consolation can be found in remembering that every Mass involves every member of the Mystical Body, and so has an objective efficacy in God’s continuing creation of the world. This objective sanctification continues in what the Catechism calls the “work of the Trinity”: united by the love of the Holy Spirit, Christ offers himself and the world continuously to the Father even when priests offer Mass alone in their churches and their parishioners participate through a TV or computer screen.

The Church’s statements about the objectivity of the liturgy by no means imply that full sacramental participation of the faithful is not important. Indeed, Christ’s work of redemption over time is not simply a legal declaration of innocence, but a process of transformative sanctification which demands the free gift of self in union with Christ’s action, completed and perfected by reception of Holy Communion. But the entire concept of participation promoted by Vatican II was always primarily connected to the internal gift of self to God so that the continuing process of creation and glorification might be accomplished. Sacrosanctum Concilium urges that people “participate knowingly, devoutly and actively,” yet defines participation as joining interiorly with the action of the priest, and therefore with Christ. The laity are urged to “give thanks to God by offering the Immaculate Victim, not only through the hands of the priest, but also with him, they should learn to offer themselves, too.” In doing so, they would be “drawn day by day into ever closer union with God and with each other, that finally God may be all in all” (48).

Sacramental reception of the Eucharist is indeed the supreme communion with Christ’s Real Presence, and popes from Pius X to Francis have urged frequent reception as medicine for the soul and a share in God’s divinizing glory. The Catechism devotes nearly one hundred of its paragraphs to its importance, so no one can rightly argue for a revival of Jansenism’s poisonous errors that discouraged actual reception of the sacred species. But in times of social isolation, it is worth remembering that the Eucharist is more than a “spiritual vitamin pill” but an action of Christ which calls for the surrender of self to God’s transforming love by joining the mind, heart, and will to those of Christ. This divine self-offering is real whether it happens in a pew or happens in a living room, and a faithful Catholic can hope in God’s Fatherly love and therefore trust that he will share his presence even in a prayer of spiritual communion.

Social distancing has caused a kind of involuntary “fasting” from sacramental reception of the Eucharist, and like all fasting, should increase desire for its return. On the other hand, this time of fasting provides an opportunity to understand the Eucharist more fully as an act of self-offering joined to the perfect offering of Christ, the Immaculate Victim. Then, when the Holy Eucharist is received again in public celebration of the Mass, Christ will find our souls tilled like fertile soil for the transfiguring power of his own divine life.

Dr. Denis McNamara is Associate Professor and Executive Director of the Center for Beauty and Culture at Benedictine College in Atchison, KS, and cohost of the award-winning podcast, “The Liturgy Guys.”