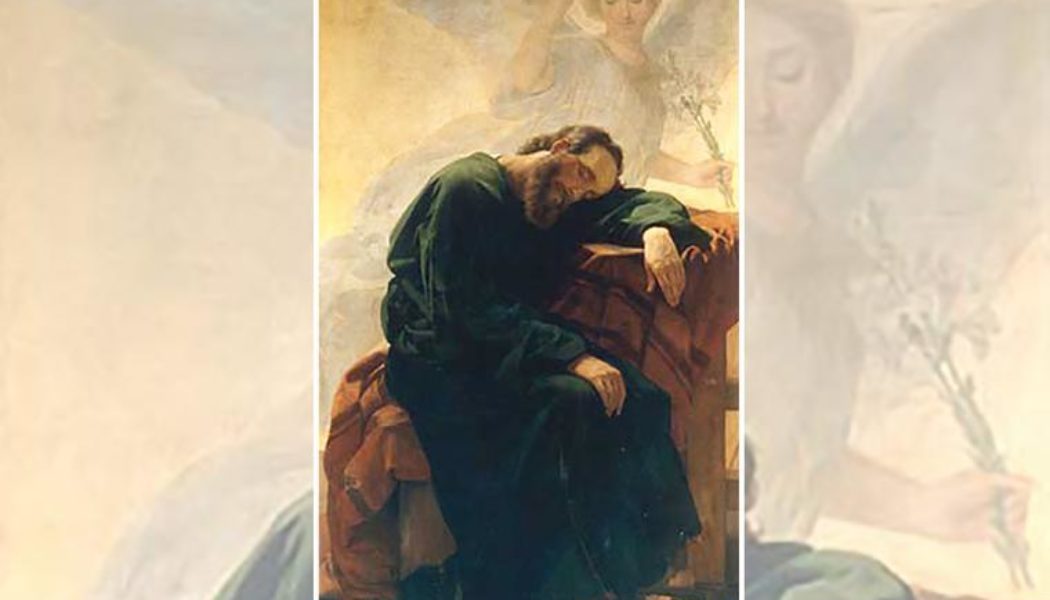 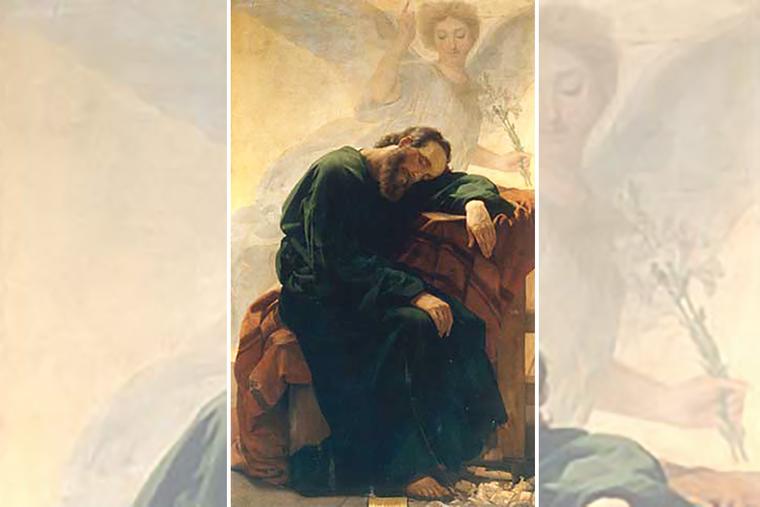 SCRIPTURES & ART: Dreams are St. Joseph’s places of encounter with the Lord.

The last Sunday before Christmas — the Fourth Sunday of Advent — is always connected with some Gospel episode that immediately precedes Jesus’ birth. But only Matthew and Luke have “Infancy Narratives,” i.e., accounts of Jesus’ conception and birth. Mark begins his Gospel with Jesus’ launch of his public ministry. John starts his Gospel with Jesus’ preexistence as the Eternal Word made flesh.

But while Matthew and Luke have Infancy Narratives, those Narratives also have different emphases. Luke seems to write from Mary’s perspective. Matthew, by contrast, focuses on Joseph. So, on the Fourth Sunday of Advent, we either hear of Mary’s Annunciation, her Visitation of Elizabeth or — this year, as we read Matthew — Joseph’s dream.

Dreams are Joseph’s places of encounter with the Lord. Matthew recounts four of those dreams. In his dreams, God assures him (1) not to worry about taking pregnant Mary as his wife; (2) to flee with Mary and Jesus from Herod to Egypt; (3) to return to Israel after Herod’s death; and (4) to settle in Galilee and avoid Judea because of the reign of Herod’s son, Archelaus, as regional tetrarch.

God often communicated in dreams, in part because to see the Almighty One face-to-face was considered deadly. As biblical commentator Bruce Vawter noted, God often communicates the most important moments of salvation history to his human partner in dreams or dream-like states, e.g., the making of the covenant with Abraham (Genesis 15:12) or Jacob’s vision of the ladder between heaven and earth that prefigures the Incarnation (Genesis 28:12-16). Old Testament Joseph’s dreams about his primacy among his brothers were among the causes for their getting rid of him by selling him into slavery (Genesis 37:5-11, 19-36). And lest anybody tell you that sexual differentiation is just something accidental, a mere sociological custom and discriminatory “gender binary” that modernity can ignore, consider that the first dream in the Bible is when God puts Adam to sleep to provide him with Eve, not Steve (Genesis 2:21-24).

Joseph is engaged to Mary, but they have not lived together. She is pregnant. Joseph knows of only one way that happens and he knows it wasn’t him.

Because betrothal in ancient Israel was a commitment to marriage, breaking a betrothal was tantamount to divorce. Given what he knew, Joseph could have exposed Mary to public disgrace and even to the rigors of the Law. He wants to respect the demands of the Law vis-à-vis the sanctity of marriage. At the same time, he is a “righteous man,” which means he is merciful towards his betrothed while also just, since the father is unidentified and thus he will not expose Mary alone.

Joseph learns in his first dream mentioned in the Gospel that true cause of Mary’s pregnancy. He receives a new Law from the messenger of the Lawgiver to name the child “Jesus,” the significance of that name being explained. He is assured by God — not the first or last time in the Bible — not to “be afraid,” in this case, not to fear taking the woman he loves as his wife, nor to hold anything against Mary with regard to her love of him, “for it through the Holy Spirit that this child has been conceived in her.” Joseph is challenged to expand his love, not just to the woman he loves but to the God he loves, the God who privileges him to raise a child who is the Messiah. Again, Matthew backs up the claim with a Scriptural quote — again from Isaiah 7:14, today’s First Reading. Joseph has nothing to “fear.” What is happening is what God promised of all: not only is he to be married, but he is to be part of something even bigger than just him and Mary.

“When Joseph awoke, he did as the angel of the Lord commanded him and took his wife into his home.” Joseph is a man’s man. He is the “strong and silent” type. The Bible does not record a single word of his, but makes clear always that he is a man of action.

Today’s Gospel is depicted by the 19th-century Swiss Italian artist Antonio Ciseri (1821-1891). “Il Sogno di San Giuseppe” (The Dream of St. Joseph) is an oil painting currently in Florence, Italy. It was cleaned and restored in 2016. You can read about that process here.

There are many paintings that depict Joseph’s dreams, but since Joseph had four of them, one must be careful to examine the total picture before deciding with which dream a particular painting should be associated. Crespi’s painting, for example, cannot be attributed to today’s Gospel, because you have Mary with Baby Jesus in the background. That painting clearly is associated with the Flight into Egypt.

Ciseri’s painting is connected with Joseph’s first dream for two reasons: there’s no Christ Child (or even Mary) in the scene, and the angel carries a lily, symbolizing Mary’s Virginity, the whole purpose of the dream message. The angel’s upraised hand is clearly instructive, which mirrors the instructions the Gospel reports as Joseph receiving, foretold by the Prophet Isaiah (Matthew 1:20-23). Ciseri’s colors are all light, speaking to the joyful nature of the message: the pale, ethereal colors of the angel, the dream, and the background stand in marked contrast to the strong colors — green and brown — of the physical world.

All Joseph’s other dreams have at least a tinge of sorrow to them: threats to the Christ Child’s life (dreams 2 and 4) or at least the end of exile because of Herod’s death (dream 3). While Joseph may have thought there was something dark and ominous about Mary’s pregnancy, the message — and the painting — make clear that this event is wholly joyful, a joy in which Joseph is called to share. One can also note the tender touches to Ciseri’s painting: like the Beloved Disciple later (John 13:23), Joseph almost seems to be reclining on the angel’s heart while wood shavings at Joseph’s feet and the work bench on which he slumbers are quiet reminders of the physical labors from which Joseph also needed rest.

It’s said that Ciseri combines some of Raphael’s art techniques with an “almost photographic” effect. We can see something of the latter in Joseph’s face. By the time Ciseri was painting, photography already existed and developing into an art form of its own. No doubt its experience gave Ciseri a new perspective on his art, much of which was religiously themed. For other examples of his work, see here and here.

Jesus would later remind his disciples that “not everyone who says to me, ‘Lord, Lord,’ will enter the kingdom of heaven, but the one who does the will of my Father who is in heaven.” Joseph said nothing. Joseph did what had to be done. The year 2022 provides us with the longest possible Advent we can have: a full seven days of its Fourth Week. Let’s use the time profitably to do what the Lord calls us to in order to “prepare the way” for a spiritually profitable Christmas.