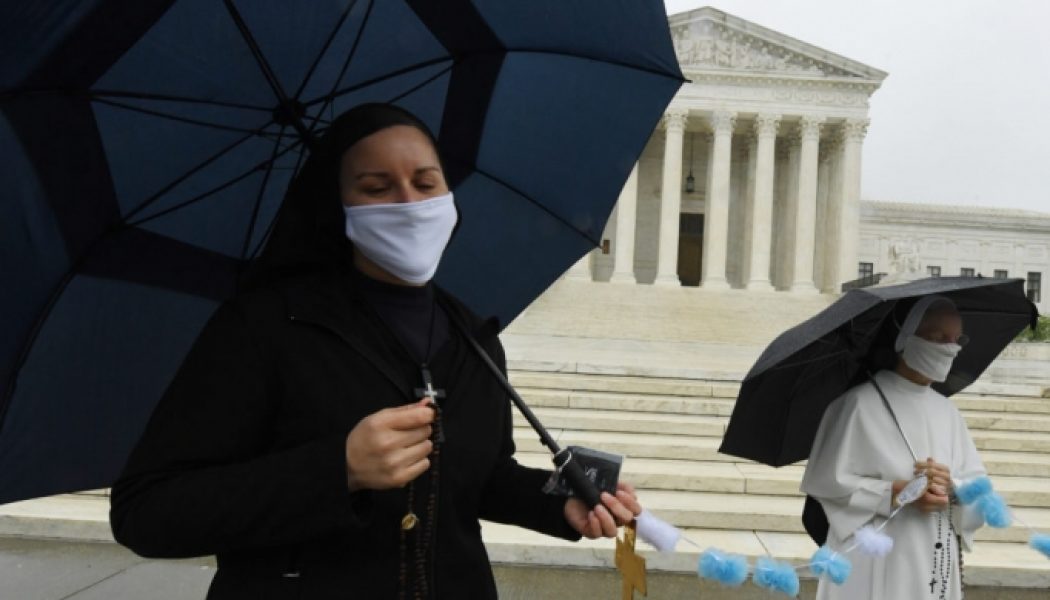 Little Sisters praying the Rosary outside the steps of the Supreme Court in April, 2020. (Becket Fund.)

Writing for the majority, Justice Clarence Thomas said, “For over 150 years, the Little Sisters have engaged in faithful service and sacrifice, motivated by a religious calling to surrender all for the sake of their brother.”

WASHINGTON, D.C. — The Little Sisters of the Poor had a victory at the Supreme Court on Wednesday, nine years into the religious order’s bouts of litigation over the Obama-era “contraception mandate” which obliged employers to provide for contraceptive coverage for employees through their health care plans.

“For over 150 years, the Little Sisters have engaged in faithful service and sacrifice, motivated by a religious calling to surrender all for the sake of their brother,” wrote Justice Clarence Thomas for the majority.

“But for the past seven years, they—like many other religious objectors who have participated in the litigation and rulemakings leading up to today’s decision— have had to fight for the ability to continue in their noble work without violating their sincerely held religious beliefs.”

In a 7-2 decision, the Court’s majority sided with the sisters in the latest round of lawsuits against them over the mandate, this time brought by the states of Pennsylvania and California, who argued that the exemption crafted by the Trump administration for organizations with religious or moral objections to the mandate shifted the cost of providing contraceptive coverage to the states and was procedurally flawed.

“We hold today that the Departments had the statutory authority to craft that exemption, as well as the contemporaneously issued moral exemption,” the majority found. “We further hold that the rules promulgating these exemptions are free from procedural defects.”

The near decade-long court battle of the Little Sisters of the Poor dates back to 2011, when the Obama administration required employers to provide cost-free coverage for contraceptives, sterilizations, and “emergency birth control” in employee health plans under the Affordable Care Act (ACA).

Although the Obama administration granted an “accommodation” to the Little Sisters and other objecting religious non-profits, the sisters sued the government in 2013 saying the process still required them to essentially give a “permission slip” for contraceptive coverage to be delivered through their health plans.

In 2016, a divided Supreme Court sent the case back to the lower courts and instructed both the administration and the non-profits to reach a compromise where cost-free contraceptive coverage could still be offered to employees while respecting the moral objections of religious groups.

In 2017, the Trump administration granted a religious and moral exemption to the mandate for the sisters and other objecting groups, but then the states of Pennsylvania and California filed lawsuits saying that the burden of providing coverage was being shifted onto the states and claiming that the administration violated the Administrative Procedure Act in setting up the exemption.

The Supreme Court took up their case against the states in January, hearing arguments by phone in April following the coronavirus pandemic.

Reseller hosting – your hosting expert. The suggestion of action you should take every day to constantly generate sales and income. It is important to know that there are many different types of real estate buyers lists available.