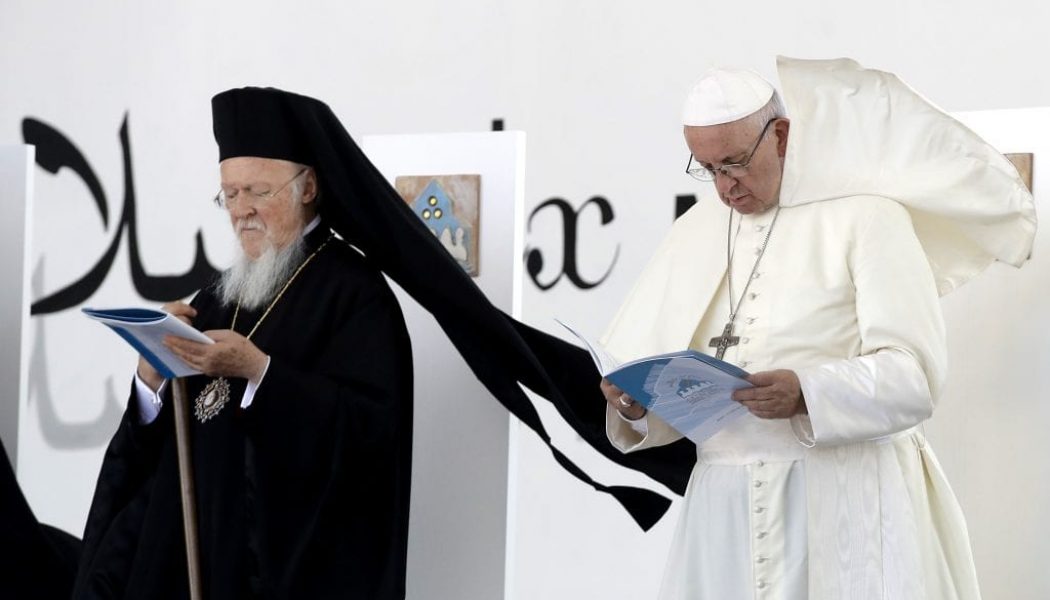 ROME – During the Roman Empire, the entire Mediterranean region was known as Mare Nostrum, “Our Sea.” It was an imperial assertion of dominance, of course, but it also reflected the idea that the peoples of the Mediterranean are linked by geography and destiny, sharing a common fate.

In a nutshell, that’s the same intuition that will carry Pope Francis to the Italian costal city of Bari on Sunday, to wrap up a Feb. 19-23 assembly of more than 50 Catholic bishops from 19 Mediterranean nations, hosted by the über-powerful Italian bishops’ conference.

(As an aside, one could make the case that after the Vatican, the two most powerful Catholic entities in Europe are the German and Italian bishops’ conferences, both of which benefit from Church tax collections in their countries that allow them to operate mammoth infrastructures and do things such as hosting this summit.)

The deliberately ironic title of the event is “Mediterranean, peace frontier.” It’s ironic, of course, because in many ways the Mediterranean is anything but peaceful, from the upheavals associated with the ongoing migrant and refugee crisis to the havoc caused by Islamic radicalism in several Middle Eastern nations that are part of the region.

The title, therefore, is less a propositional statement than an exhortation, meaning a cri de coeur about what the Mediterranean could be.

Pope Francis is scheduled to address the conference Sunday and also to greet participants, many of whom by now he knows very well. He’s also expected to visit Bari’s Basilica of St. Nicholas and pray before the relics of the saint, as well as to greet the Dominican community there. He’ll also celebrate an open-air Mass in Bari’s city center.

The basilica stop lends the day-long trip an obvious ecumenical bit of subtext, since Bari is also a popular pilgrimage destination among Orthodox Christians, especially the Russian Orthodox who have a special veneration for St. Nicholas. Two years ago, following an encounter between Francis and Patriarch Kirill of Moscow in Havana, bone fragments from St. Nicholas were sent on loan from Bari to Moscow at the pope’s personal request, marking the first time they’d left Italy in more than 1,000 years.

Francis also used Bari as the setting for a meeting with all the Patriarchs of the Middle East, Orthodox and Catholic alike, in 2018, saying he did so “in the hope that the art of encounter will prevail over strategies of conflict.”

A central agenda item for the Feb. 23 meeting is migration, and there’s obvious relevance. The Mediterranean Sea has been described as the “graveyard of Europe” in recent years, in reference to the thousands of migrants and refugees who’ve died trying to make the crossing into Europe on overcrowded, unsafe boats. It’s the stage upon which some of today’s most anguished human dramas play out, and for a pope who’s made the fate of migrants and refugees such a cornerstone of his agenda, he’ll obviously want to use this summit to once again beat the drum.

According to the official program, other matters to be discussed include the evangelization of young people, unemployment, cultural exchanges and peacemaking, all of which are worthy topics where a unified Catholic approach across the region could make an incisive difference.

Yet there’s another subject that may not be explicitly on the agenda, but it would be awfully strange should this group come together and not deal with it: The very survival of Christianity in some parts of the Mediterranean, above all the Middle East.

As is well documented, Christianity has had a bad run in the Middle East for decades, made significantly worse by the rise of the Islamic State and related forms of jihadist extremism. Iraq is probably the most harrowing example: From a Christian population believed to have been around 1.5 million before the US-led invasion in 2003, today conventional estimates are that just around 250,000 Christians are left, and many wonder if Iraq’s destiny is to become a Christian-free zone.

Indeed, the only reason that may not have happened already is because opportunities to leave are drying up amid the broader refugee crisis. When I visited the Catholic University in the Kurdish city of Erbil in northern Iraq two years ago, several young Catholics told me the only reason they weren’t contemplating leaving was because it’s difficult to get visas and they don’t want to spend two years of their lives, or more, in limbo in a refugee camp.

“If Europe and America opened the doors, every Christian here would be gone tomorrow,” was the grim assessment one Catholic priest in the Nineveh Plain region of northern Iraq offered.

Across the rest of the Middle East things may not be quite as stark, but the trend lines are still worrying. A lethal combination of insecurity, political chaos, economic stagnation and outright persecution have created a toxic environment – for almost everyone, of course, but in a special way for Christians.

It’s not quite clear exactly what the Catholic churches of the region, which are tiny minorities among the overall population in most places, can do to affect that climate, but one real contribution the Bari assembly could make is to identify their needs and to see what the rest of the Catholic world could do to help meet them.

If that conversation happens in Bari, it may not matter where else Pope Francis ends up traveling in 2020 – despite its brevity, this could be his most important outing of the year.