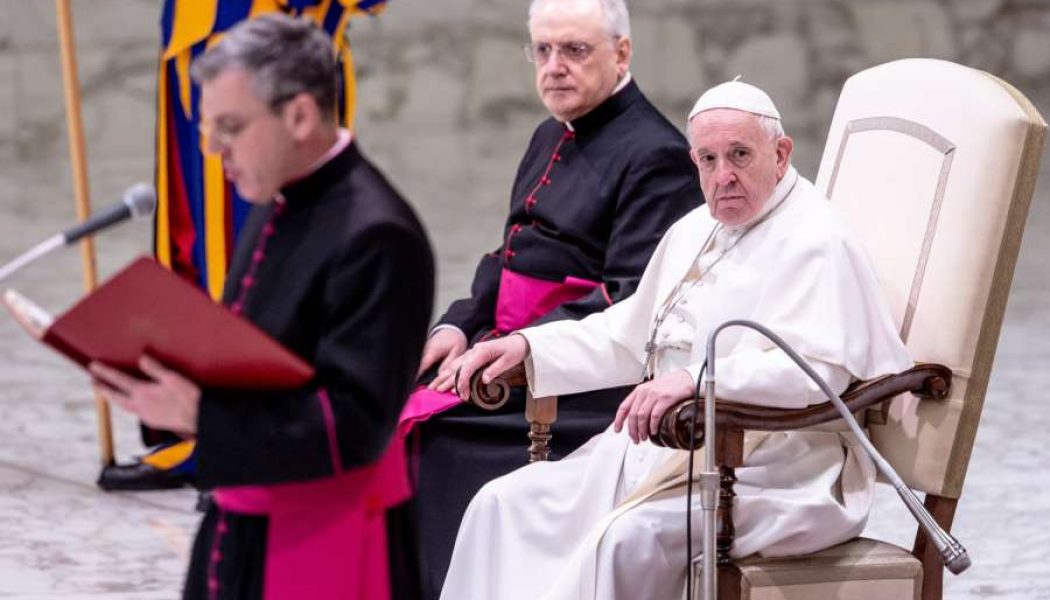 “The meek person is not accommodating, but is a disciple of Christ who has learned to defend another land well. He defends his peace, defends his relationship with God, and defends his gifts, preserving mercy, fraternity, trust, and hope,” Pope Francis said Feb. 19 in Paul VI Hall.

The pope reflected on the third beatitude from Christ’s Sermon on the Mount: “Blessed are the meek, for they will inherit the earth.”

“Meekness manifests itself in moments of conflict, you can see how you react to a hostile situation. Anyone might seem meek when everything is calm, but how does he react ‘under pressure’ if he is attacked, offended, assaulted?” Pope Francis asked.

“A moment of anger can destroy many things; you lose control and do not evaluate what is really important, and you can ruin the relationship with a brother,” he said. “On the other hand, meekness conquers many things. Meekness is capable of winning the heart, saving friendships and much more, because people get angry, but then calm down, rethink and retrace their steps, and you can rebuild.”

Pope Francis quoted St. Paul’s description of “the sweetness and meekness of Christ,” and said that St. Peter also called attention to this quality of Jesus at his passion in 1 Peter 2:23 when Christ “did not respond and did not threaten because ‘he entrusted himself to the one who judges with justice.’”

The pope also pointed to examples from the Old Testament, quoting Psalm 37, which similarly links “meekness” with the possession of land.

“In Scripture the word ‘meek’ also indicates one who has no landed property; and therefore we are struck by the fact that the third beatitude says precisely that the meek ‘will inherit the earth,’” he said.

“Possession of land is a typical area of ​​conflict: one often fights for a territory, to obtain hegemony over a certain area. In wars the strongest prevails and conquers other lands,” he added.

Pope Francis said that the meek do not conquer the land, they “inherit” it.

“The People of God call the land of Israel which is the Promised Land ‘inheritance’ … That land is a promise and a gift for the people of God, and it becomes a sign of something much bigger and deeper than a simple territory,” he said.

The meek inherits “the most sublime of territories,” Francis said describing heaven, and the land he conquers is “the heart of others.”