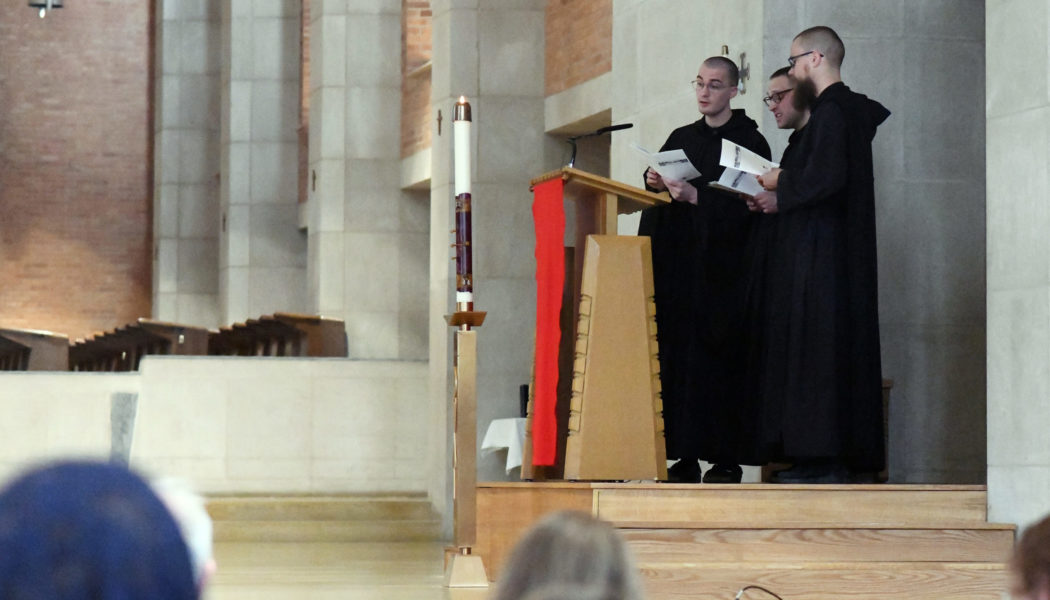 Call it a coincidence or a happy accident — but it has all the markings of the work of the Holy Spirit.

The U.S. bishops are promoting use of the extended Pentecost Vigil Mass, but that’s not the only reason monks at St. Benedict’s Abbey in Atchison, Kansas, celebrated the 21st-century revival of this ancient liturgy on Saturday.

They also did it because a junior monk got a new missal 11 years ago.

“I discovered the extended form of the Pentecost Vigil Mass when I had asked the abbot permission to use a gift card to a Catholic bookstore to purchase a Daily Roman Missal after the new translation in 2011,” Brother Leven Harton said. “Little did I know that praying with the missal for my own prayer would become one of the great graces of my adult faith life.”

The vigil was first included in the revised Third Edition of the Roman Missal in 2000 — but it wasn’t translated into English from Latin until 2011, just in time for Brother Leven’s purchase.

That’s when he discovered the extended Pentecost Vigil. The now vocations director for the Abbey says, “I immediately saw that it was echoing the Easter Vigil which I had grown to love. With a little bit of further research I realized this form of the Mass is an option for communities and wanted to experience it.”

“Anytime there are elaborate liturgies, they take a lot of work,” Brother Leven said. To make it work, the monks chose a version of the rite that unites Vespers, allowing the monks to include a larger community in their life of prayer.

It also helped that the U.S. bishops have made it easier to celebrate the liturgy by publishing a supplement to the Lectionary in 2017, putting all the readings in one place in the book used for Mass. Those readings are a tour de force of the power of the Holy Spirit.

“At the Pentecost Vigil, we are invited to trace the involvement of the Holy Spirit in the scriptural history,” said Brother Leven.

In addition to the Epistle and Gospel, the Pentecost Vigil includes four Old Testament readings — three fewer than the Easter Vigil’s seven. Together, the readings take the congregation from the Tower of Babel — where the people tried to “make a name for themselves” without God — to the day foreseen by the prophet Joel when the Spirit will be poured out at “the coming of the day of the Lord, the great and terrible day.”

In between come dramatic flashpoints in the history of the Holy Spirit on earth. In Exodus, thunder and lightning fill a heavy cloud over Mount Sinai as Moses is summoned by a mighty trumpet blast. In Ezekiel, the prophet is shown a vast field of dried bones that the Spirit of the Lord re-animates at the sound of his prophesying.

When the liturgy turns to the New Testament, both the Epistle and Gospel focus on our longing — “groaning” — for the Holy Spirit. “All creation is groaning in labor pains,” St. Paul tells the Romans, and “we also groan within ourselves,” longing to be adopted in Christ, such that we can’t even pray, but “the Spirit himself intercedes with inexpressible groanings.”

In the brief Gospel, from John, Jesus repeats the same longing, crying out, “Let anyone who thirsts come to me and drink!”

Together, these texts have a sobering effect. “The vast spread of readings in this liturgy — Psalms, Old Testament, Epistle and Gospel — was powerful,” said Josh Heidenry, who served the Mass. “This was a fitting way to end the Easter Season — a complementary bookend to the epic celebration of the Resurrection 50 days ago.”

Heidenry is a junior at Benedictine College, which is associated with the Abbey. Christopher Shingledecker, an astronomer at the college, said the extended vigil highlighted the cosmic dimension of the Mass for him. “In it, we get a glimpse of time outside of time in which not only heaven and Earth, but past, present and future are united.”

Shingledecker, an inaugural researcher on NASA’s James Webb Space Telescope, is used to gazing far from earth. The Mass showed him even more, he said, revealing “God’s dealings with humans throughout history. … In an age when we’re bombarded with 15-second videos and 140-character messages, this timeless encounter with God in the extended liturgy becomes more important, and it’s certainly something I personally long for.”

Jen O’Malley, a homeschooling mother of seven in Atchison, was refreshed by the readings as well.

“I am regularly humbled by the Church’s ability to give me exactly what I need when I’m feeling a little depleted,” she said, and Ezekiel is highly relatable to a mom “trying to get nine sets of bones and sinew out the door on time. And the shoes are missing — again.”

Even her children appreciated it, she said: “Amazingly, they were enchanted and did really well with the longer liturgy.”

Restoring the Importance of Pentecost

Enchanting — or, better, divinizing — is in fact the point.

Abbot James said adding the liturgy “allowed us to look at the Church’s vision of the Vigil Mass for the ‘high’ solemnities — Christmas, Easter and Pentecost. The U.S. bishops, as is my understanding, have been promoting the extended Vigil Mass of Pentecost as the third major vigil of the liturgical year.”

“I saw it as a further immersion into the Word of God active in the Scriptures and in the Eucharist,” he said. “The Word becoming flesh in the Incarnation of Christ, the Word given to us in the Sacrifice of Christ in the Paschal Mystery, and the Word in the Spirit leaping down once again as the Church is given birth at Pentecost.”

Atchison’s monks invite their lay congregation to a “common table” after major vigils, with eggnog and “Silent Night” following the Christmas Vigil and cake and punch after the Easter Vigil. The Pentecost Vigil was followed by a pot-luck dinner with punch and beer on the lawn.

Author and Benedictine College theologian Mark Zia saw the extended vigil as a gift to the Church.

“Speaking as a theologian but not a liturgist, the Church lost something when it reduced the number of liturgical octaves according to the Novus Ordo to two, namely, Christmas and Easter,” he said.

The three ancient octaves of Christmas, Easter and Pentecost “can be seen as the fulfillment and perfection of the three great Jewish pilgrimage feasts of Passover, Weeks and Tabernacles,” he said. These were days-long affairs in Judaism. Adding the fulfillment of Christ only heightens their significance. “These feasts are so important that one day is insufficient to contain the joy and meaning of them, hence they are prolonged to a full octave of celebration,” he said.

He cited Father Jean Corbon, the principal author of the prayer section of the Catechism of the Catholic Church,who said “the liturgy is celebrated at certain moments but lived at every moment.”

Added Zia: “I would suggest that the Church never gains anything through liturgical minimalism, and that any liturgical celebration seeking to recapture, nurture and prolong our awareness and lived experience of the mysteries of salvation will help us better understand that liturgy is life.”

In fact, he called for even more.

“Perhaps we can hope for the restoration of the Pentecost octave in the future,” he said. “With all of the ills plaguing both the Church and society today, we need more — not less — of an awareness of God and his transformative power offered to us through the celebration of the sacred liturgy.”