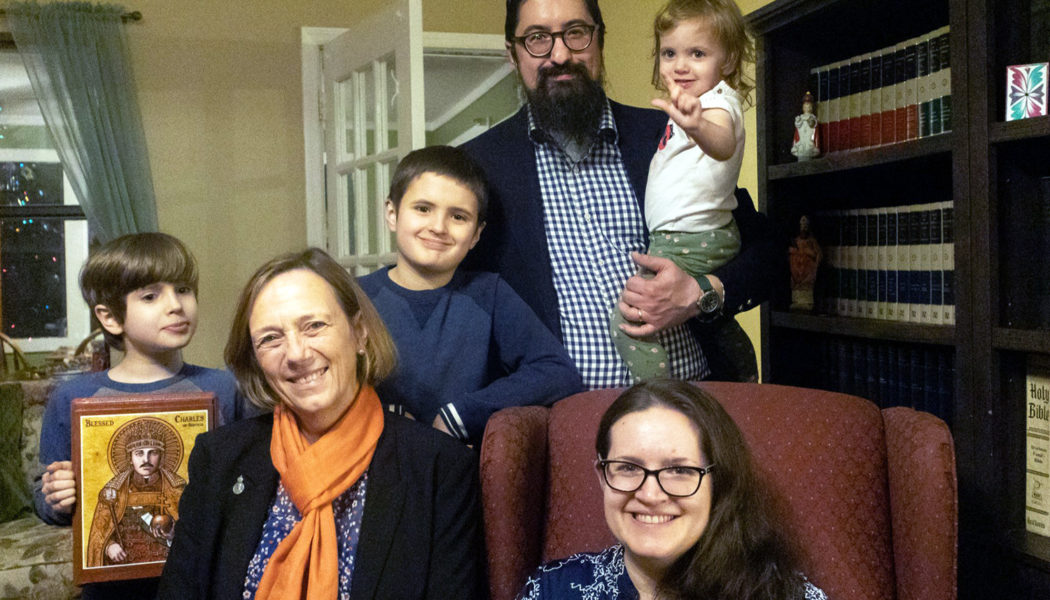 An interview with Princess Maria-Anna Galitzine, the granddaughter of Blessed Karl of Austria and his wife, Servant of God Empress Zita.

Blessed Karl of Austria died in 1922. He was the last Emperor of Austria and the last Apostolic King of Hungary.

One would not think that this man would have much in common with young Catholics in the U.S. However, since his beatification in 2004, it has precisely been young U.S. Catholics who have fueled his cause for canonization. The various feast day Masses and symposia that occur around the U.S. (and the world) are packed with young people. Not only are devotees young, but they are dedicated to traditional Catholicism and pious practice. The Traditional Latin Mass, the Byzantine Divine Liturgy and various devotions are celebrated in conjunction with this deceased Austrian Emperor.

There are many unexpected convergences occurring around the cause of Blessed Karl, so I spoke with his granddaughter, Princess Maria-Anna Galitzine about his cause and the reason why he is so popular at rallying young people to the Faith.

I asked Her Imperial and Royal Highness the following questions:

Blessed Karl has been a “blessed” since 2004. How is his cause for canonization going? What are some of the next steps in the process? Is the cause growing?

Blessed Karl’s cause continues to grow along with the Emperor Karl League of Prayer. The cause has received a new postulator, Dr. [Nicola] Gori, and there are presently two potential miracles being investigated. Both miracles involve the healing of infants. Two babies, who were not expected to live, inexplicably survived through the intercession of Blessed Karl. Of course, these cases have to be diligently studied and presented to the Vatican. With prayer, we hope that one or both of these cases will be accepted by the Vatican as true miracles wrought through Blessed Karl’s intercession.

Emperor Karl was known as “the Peace Emperor” due to his steadfast work in attempting to end World War I. Now that Europe is plunged back into conflict, what wisdom do you think Blessed Karl would have for our time? How do you think he would go about making peace?

This is a difficult question to answer but we can take some cues from Blessed Karl’s life, which may be helpful.

First, Blessed Karl was absolutely devoted to peace. Having inherited the terrible situation of WWI, he worked tirelessly to bring about an end to the war. Today, we need the same. We need people to be devoted to peace.

And, Blessed Karl was not just devoted to peace as some fanciful idea. He saw how the war affected the civilian population. We see the same now in Ukraine. Blessed Karl would be tremendously sad to see innocent non-combatants killed, wounded, or displaced from their homes. He was also very dedicated to the soldiers who fought in his armies. For families who had already lost a son in combat and had other sons fighting, he would make sure to send them home. He recognized the tremendous sacrifice that families made during wartime and he tried to honor that as best he could. I think that Blessed Karl can be called upon now as an intercessor for peace in our world.

It appears that Blessed Karl has quite a following among young Catholics. What do you think is their draw to Blessed Karl? What do they see in his life that is so attractive and worthy of imitation?

When they see a picture of Blessed Karl, they see a young man. He was only 34 years old when he died. They see a family man. A man with tremendous responsibility on his shoulders. Yet, he was devout. He always took time for prayer. In fact, his wife, Servant of God Empress Zita, described him as being “in another place” when he was at prayer.

He was also a man of sacrifice. He predicted his own death when he and his family were sent into exile on Madeira. He said that his death would be for the unification of his people. I think young people are searching for these qualities and they find them in the example of Blessed Karl.

Blessed Karl’s feast day (Oct. 21) is his wedding anniversary, a very unique thing on the calendar of the saints. Perhaps, you could share one story that your Grandmother Empress Zita, told you about her marriage to Blessed Karl.

Empress Zita treated the subject of her marriage with so much reverence that she did not speak of it very often. She did recount the joy of her honeymoon trip with Blessed Karl. They took a tour of the Empire and she would speak of what joy they had. You could tell that they had a joyful marriage.

Of course, they struggled. The circumstances of the war and their exile were very painful and difficult. Yet, Blessed Karl’s first concern was always for his family, especially for the education of his children. Empress Zita inherited a love of education from her father and Blessed Karl absolutely supported a quality education for his children. He was especially concerned about their religious education. When he was dying, he wanted his eldest son, Crown Prince Otto, to be at his bedside. He wanted his son to see how a king and emperor died and how he gave his last breath to God.

The lessons that he taught his children throughout his life testify to the kind of marriage and family life he had. I think that his marriage is a model and inspiration for young Catholics. He told his wife on their wedding day, “Now we must help each other to get to Heaven.” This sums up very well the sacrament of Christian marriage.

You can find out more about Blessed Karl, his life and all the events surrounding his feast day at the website for his cause (EmperorCharles.org).

You can view the interview of Princess Maria-Anna on Blessed Karl and Servant of God Empress Zita on EWTN Live here: