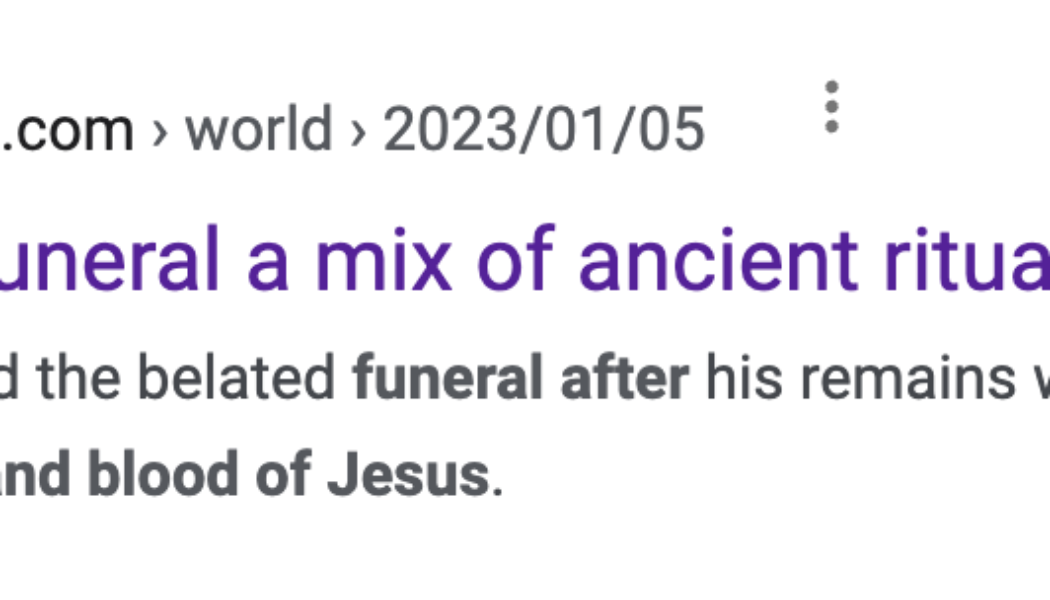 Dear @washingtonpost \u2014 I don\u2019t know if you have a Catholic journalist or editor on staff? But if you don\u2019t \u2014 I would be gladly to be your volunteer editor for your paper next time you covering Catholic Mass or event so that I might be able to help you to use correct terms. Thanks pic.twitter.com/IUnOuuXx0H

Dear @washingtonpost — I don’t know if you have a Catholic journalist or editor on staff? But if you don’t — I would be gladly to be your volunteer editor for your paper next time you covering Catholic Mass or event so that I might be able to help you to use correct terms. Thanks pic.twitter.com/IUnOuuXx0H

Once upon a time, it was relatively clear when a news organization did or did not need to publish a correction about an error in one of its reports.

But then the World Wide Web came along and reporters at major organizations began writing what were, in effect, news reports that evolved during or just after an important event — rather like the “write-thru” story updates that wire services had for decades sent to newsrooms.

In the old days, however, there was a definitive moment when ink hit paper and readers and journalists could consider a news report “published.” If there was an error of fact in that published story, then everyone (within reason) knew that there needed to be an ink-on-paper correction.

What is supposed to happen when a news report is merely published online? Is a story in digital bytes as “real” as the old ink-on-paper version? That’s the kind of issue journalists have been debating ever since professionals began “breaking” stories online or producing early versions of news reports that, eventually, merged into final reports that were “published.”

This brings me to an interesting sentence that ran, sort of, in a Washington Post foreign-desk (as opposed to the religion desk) story about the funeral Mass for Pope Emeritus Benedict XVI. Here is that sentence, which has circulated in screen shots taken of the Post website:

At the religious event, sometimes called the Eucharist, the faithful receive the sacrament, normally consecrated bread like wafers and wine, symbolizing the body and blood of Jesus.

I have done quite a bit of searching for that material online — especially the “symbolizing the body and blood of Jesus” reference — and I can only find fragments of digital material that show that it once existed. Maybe I have missed it, somehow. If so, I would welcome a correction and a working URL.

Meanwhile, check out, this wispy reference found in this online search file.

Here is the big question: Does this sentence contain factual “errors” that need to be corrected? If so, what form of correction is required?

There is little question, as illustrated in the @VudatNation tweet embedded with this post, that this vanished (maybe) Post report contains errors — from the point of view of Roman Catholic history, doctrine and tradition and people who care about matters of that kind.

Ah, but are clear errors of fact about church doctrine “real” errors from a modern “journalism” perspective? After all, the language contained in that early version of the Benedict XVI funeral story may be accurate from the point of view of secular readers and many, but not all, Protestants. Does a new report about a Catholic “event” need to be “accurate” from a Catholic point of view?

OK, I’ll ask. Does a news report about a National Football League game need to be accurate, in terms of the language, rules and traditions of the NFL? How about a news report about events on Capitol Hill or at the U.S. Supreme Court? What about Wall Street news? And would a story about worship at Mecca need to be accurate from an Islamic point of view?

If there was an error of fact, in this case, where is the correction? Was it “enough” for this early story to simply vanish into a “real” report that didn’t include that language?

Just asking. Meanwhile, here is the overture of what I assume is the final Post report about the funeral: “Historic but spare funeral for Pope Benedict XVI, led by Pope Francis.”

VATICAN CITY — For the first time in its modern history, the Catholic Church buried a retired pontiff, following a stripped-down and solemn ceremony … that included a final, indelible gesture: Pope Francis bowing his head and placing his hand on the coffin of Pope Emeritus Benedict XVI before it was carried away.

The requiem Mass, conducted as a heavy fog lifted, used a mix of ancient rituals and new precedents to pay tribute to a figure who transformed the papacy with his decision 10 years ago to abdicate.

The ceremony lacked the noise, the color, the grief and even the bursts of joy that marked the last papal funeral, of John Paul II, in 2005. Benedict’s drew 50,000 people — one-sixth of that crowd. It took 90 minutes, half as long. It showed the profound difference between what it means to die as a beloved sitting pope vs. as a retired and controversial one.

This funeral did contain some eyebrow-raising moments, which the Post final report covered rather well.

For example, there was that rather brief and low-key sermon by the current pope:

It was only because of Benedict’s historic abdication that Francis had the chance to preside over the ceremony for his predecessor. Francis delivered a homily steeped in verse, without the personal touches, making no reference to his predecessor by name until the last sentence, when he said: “Benedict … may your joy be complete as you hear his voice.”

Francis’s approach marked a notable departure from the homily at the last papal funeral, delivered by Cardinal Joseph Ratzinger 10 days before he would be elected as Benedict. Then, Ratzinger had woven verse and biography, describing John Paul II’s teenage years working at a chemical plant, his discoveries as a young priest and his reign as pontiff, when he “tried to meet everyone.” When Ratzinger finished, the crowd in St. Peter’s Square roared, some chanting: “Saint! Saint!”

Actually, the crowd chanted “Santo, subito!” over and over at different points in the Mass — which means “Saint soon!”, or “make him a saint soon.”

Though the Vatican had previewed that Benedict’s funeral would be “simple,” he received many of the passages afforded other pontiffs: For three days this week, he lay in state for public visitation. Certain tokens from his pontificate, as well as a written text describing his life and reign and resignation, were enclosed in his coffin. … (A)fter the funeral, he received a final ritualistic burial reserved for popes, with his coffin encased in zinc and then enclosed in an outer casket of oak.

But because Benedict was not a sitting pope, there will be no immediate conclave or intrigue. The church will forgo its customary nine-day mourning period. In passages during the funeral, Benedict was cited as “pope emeritus.” There was an additional prayer for “Our Holy Father, Pope Francis.”

It would, of course, be interesting to know more about the details of the funeral what were requested by Benedict XVI — including many prayers said in Latin — and those chosen by the current Vatican team.

Some who were present found it hard not to read between the lines in this rite, including familiar lines or actions that were not present.

The atheist scribe Václav Klaus — former president of the Czech Republic — was in attendance and posted a personal reflection about the funeral on his own weblog. It was picked up by the conservative Catholic website Rorate Caeli (“Drop down, ye heavens”). Here is a key passage:

I’d say it was a “normal” mass. But I have to say, I certainly didn’t go to Rome for that.

Could it be that today’s Vatican didn’t like him? Or not just the Vatican, but today’s Catholic Church, which — unlike Pope Benedict — doesn’t want to buck the world today, even though it is so contrary to the Church’s millennia of teaching? Wasn’t Pope Benedict (and post-Pope Benedict) the bad conscience of today’s Church? People write to me that there is no book of condolences in their church, no intercessions anywhere. Was the Church unhappy that Benedict became a symbol of a passing era perhaps — with the exception of the Queen of England — even in the non-church world? And that he strongly protested against its end? Why do we not hear the same warning voice from other Church leaders? I am not called to judge, but it is sad.

This was, no doubt, a complicated story. The basic facts mattered.

Being a teen boy might be challenging at times, but receiving a great gift might help. Disclaimer. • nordic home office equipment, setups, furniture and more.