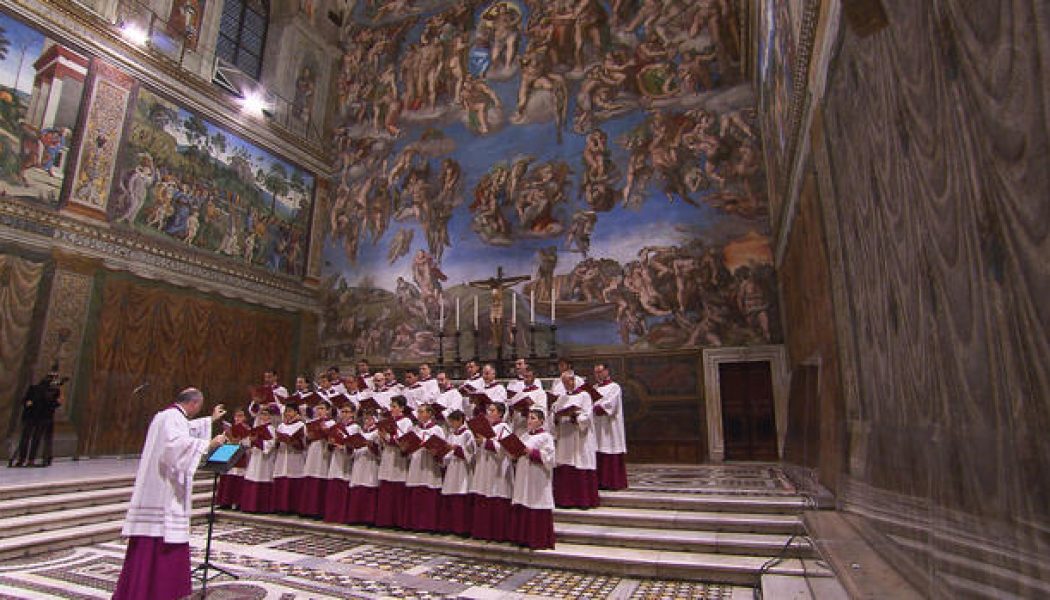 The singers are at the pope’s side for all important papal celebrations. The Sistine Chapel Choir performs when the pope presides over the Christmas Eve mass in St. Peter’s Basilica, and they sang at the private Vatican mass to honor Pope Francis’s 80th birthday.

And as the oldest choir in the world — evidence of their existence dates back to the seventh century — they’ve seen a few popes.

The bulk of the choir’s repertoire is sacred music composed by Giovanni Pierluigi da Palestrina. Palestrina, who lived from 1525-1594, composed his music with the Sistine Chapel in mind, drawing inspiration from Michelangelo’s colorful frescos adorning the walls and ceiling.

With masterpieces like The Creation of Adam in the center of the ceiling above them and the grandiose The Last Judgment positioned behind them on the altar, even the choir felt transported in a recent concert.

“When we sing Palestrina, it’s not like looking at a fresco,” says Mark Spyropoulos, a baritone from Britain and member of the choir. “It’s the equivalent of being in a fresco.”

This video was originally published in 2016.

But I say unto you, That every idle word that men shall speak, they shall give account thereof in the day of judgment.
Matthew 12:36
DailyVerses.net

unlocking the diary of your heart: using your prose to write your poetry

The time I met Kobe Bryant at daily Mass: “Like all of us, he came to pray”…

What happened in the “Dark Ages,” and why do people call them dark?

Passion – Whom Shall I Fear

Abortion and preaching to the choir…

Prayer for the conversion of a loved one…

Kobe Bryant Dead at 41: How Scandal Turned Him to Catholic Faith and Divine Mercy…

Homily for first Word of God Sunday: Why does God give us his Word?

“Keep a Bible close to you,” says Pope, as Church celebrates first “Sunday of the Word of God”…

Elizabeth Wurtzel made a mess of her life, and ended up dying as she lived…..