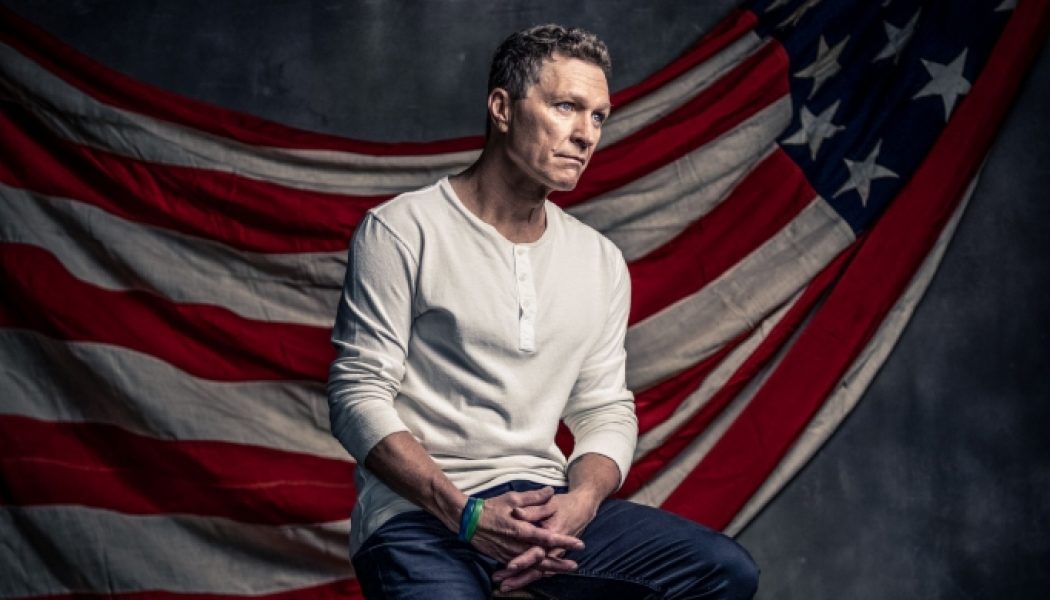 Personal heartbreak led Craig Morgan to pen a soul-stirring song that has touched the hearts of countless listeners. (Nate Griffin)

Chart-topping musician opens up about the loss of his son and his subsequent journey into the Church.

I’ve been beat up, I been pushed and shoved, but never really knocked down.

But the pain of this was more

Than I’d ever felt before.

Yeah, I was broke.

On a family trip the 19-year-old drowned in a tubing accident on Kentucky Lake, Tennessee. On that July day the pain was more than Morgan had ever felt before and seemed greater than he could ever bear. Still, he cannot speak of what happened that day.

Three years later, in July 2019, Morgan walked onto the stage at Nashville’s Grand Ole Opry. In front of a packed audience, he sang a song that later he would say came to him in a dream and that could only have been written with divine inspiration. “God used me to write that song,” says Morgan. “He used me as a tool. It is a testament to God he used me alone to write it.”

In the mornings I wake up, give her a kiss, head to the kitchen,

Pour a cup of wake-me-up and try to rouse up some ambition,

Go outside, sit by myself but I ain’t alone:

See, I’ve got the Father, my son, and the Holy Ghost.

The song he sang that night is called The Father, My Son and the Holy Ghost. The raw emotion of its lyrics struck a chord in many, finding an immediate audience. The song went straight to the top of the charts in digital song sales, without the help of a label or radio play. Today, the YouTube video alone has more than three million views.

What many in the audience did not know was that, at the 2017 Easter vigil, Morgan was received into the Catholic Church. That Easter night was the fulfillment of a journey that he had begun with his son Jerry, who was being instructed in the Catholic faith at the time of his death. The Father, My Son and the Holy Ghost is about the pain of the bereavement Morgan had undergone. But it also tells of the singer’s newfound Catholic faith.

Now a year on from that Grand Old Opry performance, Morgan spoke to the Register from Nashville, where he lives with his wife, Karen, and their family.

Morgan remembers that, when he stepped off the Grand Ole Opry stage to the sound of heartfelt applause, he felt that never again would he sing The Father, My Son and the Holy Ghost. Its subject matter hurt too much. Yet at that moment, Morgan’s friend Ricky Skaggs, the bluegrass singer and Country Hall of Famer, told him: “You have to sing this song for the rest of your life.”

Skagg’s comment proved more prophecy than observation; for, as it transpired, the song gave impetus to Morgan’s career. On the back of the song’s chart success, he was given a record deal with Broken Bow Records. But The Father, My Son and the Holy Ghost also gave him something else. From then on, Morgan realized how powerful the song was in helping others to come to terms with the loss of a loved one, just as it had been for him.

“You know, the thing is, I would much rather none of this stuff happen and for Jerry to be here,” Morgan said, “But that’s not the way it is. And now Jerry is in a place where what’s happening has a different meaning,” before adding, “God guided all of this.”

While the song was topping the charts, he appeared on the Today television show. When asked by the show’s host about the personal nature of the song, Morgan replied: “It hurts for me to sing it. It’s not a song that I enjoy singing. But I do see that it’s important that I do this. … I think this is what God wants me to do, so I’m doing it in spite of the pain.”

Craig Morgan Greer was born in Tennessee in 1964. Eighteen years later, he joined the U.S. Army. He served on active duty for nine and a half years as a member of the 101st and 82nd Airborne Divisions. He remained in the reserves for another six and a half years. During his time in the military, he saw active service in three war zones.

When he left the army, Morgan returned to Tennessee, where, to support his young family, he worked in construction, and as a security guard and a Walmart employee. Then he decided to try his hand at something he had wanted to do for a very long time: tell stories through song.

In 2000, Atlantic Records released Morgan’s first album, Craig Morgan. It was chart-topping and produced three hit singles. He was on his way. Since then, Morgan has charted 17 times on the Billboard country charts; six singles have reaching that chart’s “Top 10.” Morgan has not only been a successful singer in the world of country music, but he is an artist who has experienced an unusually enduring popularity with that genre’s fans. This year he is about to embark upon the biggest tour of his career.

The Father, My Son and Holy Ghost may have kick-started Morgan’s career, but something else was at work in his life. “When Jerry died,” Morgan reflects, “I was not Catholic, so I was not part of God’s church. I believe that was the way God wanted it to be.” The singer’s journey into the Church was largely due, he says, to his wife, Karen. She had been studying theology when she met Morgan, and she had remained a keen scholar of her Christian faith throughout their 31-year marriage. By the middle of the last decade, those studies were leading her to the Catholic Church. This confused Morgan. Often he would tell his wife that on subjects such as devotion to the Virgin Mary or the composition of the Bible, the Catholic position was simply “wrong.” If only to refute his wife’s new thinking, he started to study the Catholic arguments. It was then that he discovered, with regard to the number of books in the Bible, that the Catholic position had been consistent for 1,500 years, long before anyone had heard of Martin Luther. At that point, Morgan wondered: If the Catholics were right on this, then what else were they right about?

Now, since his reception into the Church, Morgan tries to get to Holy Mass each day. He strives to remain in the presence of God as he goes about his daily work. He prays the Rosary. “St. Joseph is my saint,” he says with a smile. Perhaps it is not so surprising that he finds the Holy Patriarch both a model and source of help. His former Protestant suspicion of Our Lady has completely evaporated. Now he references her as helping him through the years since Jerry’s accident; he speaks of asking her intercession, of her having “the ear of Our Lord.”

Morgan is on a mission to help others. No doubt, in so doing, he is also helping himself to heal. Listening to him talk about his desire to help others is evidently not something new to him, however. When asked about an incident some years back, he was at first reluctant to speak about it, but this is indicative of the man.

In February 2011, Morgan was with Jerry in Dickson, Tennessee, when he noticed a house on fire. Morgan rushed to the burning building and found a distraught woman standing outside crying for help; her two sons were trapped in the building. Morgan rushed inside and through the smoke found one of the children. He picked the boy up and brought him outside, where he handed him to his mother. The former Army paratrooper then went into the burning building a second time. On this occasion, he managed to find an even more petrified child, whom he also carried out, giving the little boy to his relieved mother. At this point, the fire brigade had arrived. Morgan then proceeded to grab a hose and help put out the fire.

It is heartbreaking that, only five years later, his own son was dead.

This year on Jan. 24, the anniversary of Jerry’s birthday, Morgan’s Facebook page contained the following tribute:

“23 years ago today, he was born, and God gave him to us. Seems like just yesterday we were wrestling at turkey camp and laying on the roof looking at stars, loving and laughing at everything in life. With Jerry there were more good days than bad, more laughter than anger, more sunshine than rain. His time on earth affected everyone he met in a positive way. He taught the teacher so much. Because I know his faith in God was real, I know I’ll see him again. Today we celebrate his birthday. Thank you God. I pray in the name of the Father, the Son and the Holy Ghost, he sees our love for him. We miss him.”

I heal a little more each day inside;

I won’t completely heal till I go home.

One day I’ll wake up and I’ll be home

With the Father, my son, and the Holy Ghost.