“I want to live long enough to be a burden to my children.”

I heard a Christian thinker I respect say that years ago, and it embedded in my mind, shocking as it is to our sensitivities. After all, isn’t this the shocking reverse of the received wisdom we hear, and say, all the time? Isn’t it selfish to want to be a burden to one’s children?

This sentence came to mind again this weekend when reading this article in The Guardian by Giles Fraser. Fraser writes that he is not enamored with the pain and indignity of death. But caring for others, and being cared for, is love. We are not “brains in vats,” he notes but persons who live in communities and families.

None of us want to be an undue burden to anyone, of course. I certainly wouldn’t want my children, when I’m elderly, to have to suffer in caring for me in the throes of dementia or cancer or paralysis. But when I peel that back further, in my case, the real issue for me is simple: pride.

Simon Peter of Galilee was happy to serve his Rabbi and lord, Jesus. He was happy to preach and to heal and to cast out demons, to organize events and to camp out all over the countryside. In the fullness of time, he was willing to sword-fight anyone who tried to arrest his King. But when Jesus kneeled before him with a towel and water, Peter flinched. “You shall never wash my feet,” Peter said (Jn. 13:8).

I’m the same way. I love being the answer to problems. But when I need other people, I am reminded that I am not alone. I am not the solution. I am not the Messiah.

That’s why God gave us a life-cycle, from dependence to dependence. We don’t pay our parents or interview them or recruit them. They are just there when we are born, and we are helpless. And, at the end, despite all our technology, there is something right about falling back on the kindness of friends and family, who are motivated not by our ability to pay them back but by love and fidelity and community.

And that’s why God gives us the church. No person is a church to himself, but is by definition in need of others, with gifts he or she doesn’t have. The church is an organism, a Body. Without dependence on others, we don’t have a Body but an organ in a jar, to be studied or collected or destroyed as medical waste.

In the Body of Christ, there are not people who have burdens and people who don’t. We are to “bear one another’s burdens” (Gal. 6:2). We are all a burden to be borne, just in different ways.

“Truly, truly, I say to you, when you were young, you used to dress yourself and go wherever you wanted,” Jesus told Peter, “but when you are old, you will stretch out your hands, and another will dress you and carry you where you do not want to go” (Jn. 21:18).

He was no burden. He was loved. He is Love.

I hope my children never have to sacrifice for their father when I’m elderly. But, if they do, I pray I’ll be Christlike enough to crucify my pride and receive their love. And I pray that I’ll be learning to love, and to be loved, all along the way.

Russell Moore is President of the Southern Baptist Ethics & Religious Liberty Commission. He formerly served as Dean of the School of Theology at The Southern Baptist Theological Seminary and executive director of the Carl F. H. Henry Institute for Evangelical Engagement. Dr. Moore is the author of several books including Adopted for Life: The Priority of Adoption for Christian Families and Churches (Crossway). 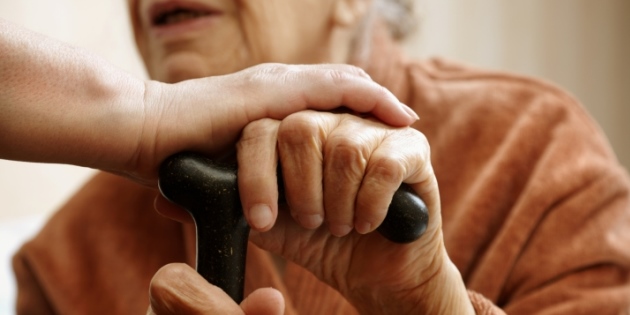