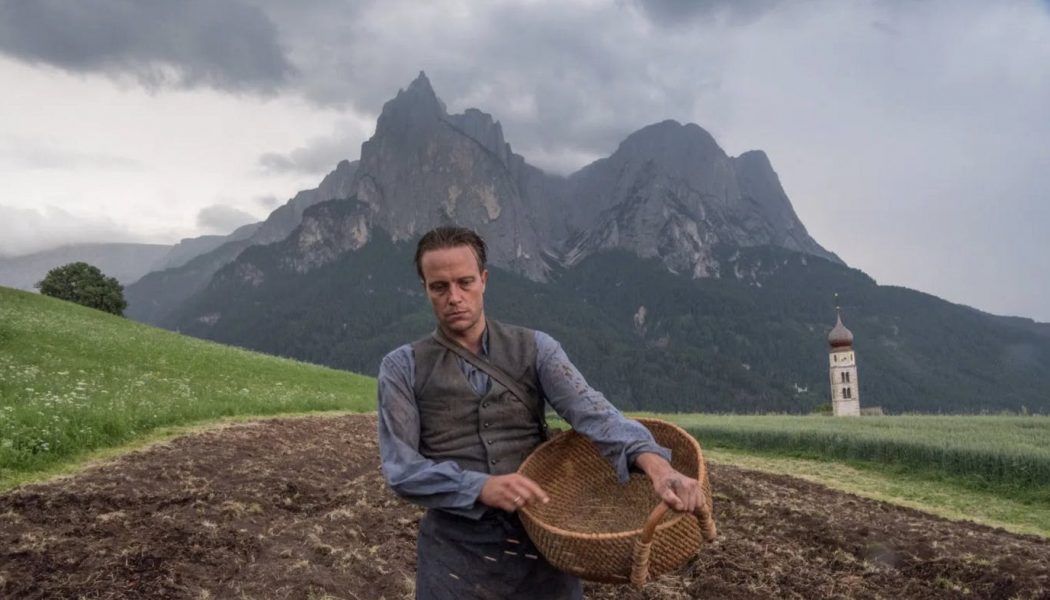 Franz Jägerstätter’s life and death raise one question above all: why did he do it? Why did this Austrian farmer refuse to fight in Hitler’s army, and why did he stick doggedly to that decision even when told he would face the death penalty for doing so?

Jägerstätter’s martyrdom – he was declared Blessed by Pope Benedict XVI – has always resonated with religious believers, and Terrence Malick’s new biopic, A Hidden Life, has been most warmly received by Jägerstätter’s fellow Christians. For the Eastern Orthodox writer Rod Dreher, it is “the best evocation of the Gospel ever committed to film”. It is, as Malick’s films tend to be, inventively told and achingly beautiful. But the big question goes unanswered.

That’s not to demean August Diehl’s performance. His Franz is, no doubt, what Malick wanted to portray: a quiet hero, with the emphasis on “quiet”. While we see Franz as a loving husband and father, and a faithful friend, he is also a reserved man, easily reduced to silence. When the Nazis arrive in his village of Sankt Radegund, Franz grows increasingly pensive. Asked to make a small donation to the war effort, he blurts out that he won’t, then walks away looking anguished. After being conscripted and refusing to serve, he faces a series of interrogations in which he never quite explains his position. We contemplate his haunted face and see in it, perhaps, the suffering Christ. Yet his actual thoughts remain mostly mysterious.

Curiously enough, this Franz resembles the protagonists of Malick’s previous films: troubled, introspective, ill-at-ease in a world which provides no answers to the questions that burden him. But the real Franz, well portrayed in Erna Putz’s biography, was rather different. Until his late 20s, he was one of Sankt Radegund’s more laddish characters: the first villager to own a motorbike, he fathered a child in a liaison with a farm girl and once served a brief jail sentence for brawling with a Home Guard soldier.

After Franz got married and started taking his faith more seriously, he was still recognisably the same man: decisive, plain-speaking, erring on the side of rashness rather than reserve. During his first period of military training – before his fateful decision – he wrote home saying it was a good thing there were severe penalties for getting into fistfights with other soldiers, “or I might sometimes fail to keep command of myself”. As the parish sacristan, meanwhile, he imposed a strict ban on talking in church: chat to your neighbour, and you would be asked to leave. Franz sometimes apologised for his obstinacy in argument, and sometimes revelled in it. “Greet the village authorities most warmly for me,” he quipped in another letter to his wife. “I’ll certainly quarrel with them if I’m allowed to come home.”

He stood out, not so much for his aversion to Nazism (which was shared by others in Sankt Radegund) as for his shocking willingness to challenge it boldly and publicly. Even his friend Fr Josef Karobath – no appeaser, but a man who had been banned from the district for preaching against Nazism – suggested to Franz that he might be taking his opposition too far. Did he really need to refuse to serve in the army? “I wanted to talk him out of it,” Fr Karobath later recalled, “but he defeated me again and again with the words of the Scriptures.”

That is a good image of Franz Jägerstätter to hold in your mind, if you want to understand him: ready for a debate, prepared to go on the front foot, and with a hidden strength which stemmed from his deep piety.

Such a scene would also be unimaginable in A Hidden Life. Malick’s Franz does not really get into arguments. He will make rather general statements to a priest about the evils of Nazism, or offer an aphorism to his interrogators. (When asked by a military judge “Do you have a right to do this?” he replies enigmatically: “Do I have a right not to?”) But the combative, heart-on-his-sleeve, sometimes sardonic figure who leaps from the pages of Putz’s biography is nowhere to be seen.

This is not just a pedantic point about historical accuracy. The question at the heart of the film, which is three hours long and spends a lot of time just travelling over Franz’s face, is: what drives this man? As several reviewers have complained, the film keeps us in the dark. Of course, life is mysterious, death is mysterious, and ultimately a martyrdom like Franz Jägerstätter’s can only be understood in terms of the ultimate mystery of Christ’s sacrifice on Calvary. But at the same time, people do things for reasons. And as it happens, the real Franz made his reasons clear. He was worried, he told Fr Karobath, about “the danger to the salvation of my soul”.

Franz thought a great deal about the next life – with his usual straightforwardness. “It particularly depends on our free will,” he once wrote to his godson, “whether we want to be eternally happy or eternally unhappy.” The way to heaven, he would insist to the irritation of his Jehovah’s Witness cousin, was through the Catholic Church; and Pope Pius XI and several bishops had taught that, given the Nazis’ theories on race and other matters, nobody could be a Nazi and a good Catholic. Franz’s view was summed up by a dream in which he saw a packed train on its way to hell. The train, he decided, was Nazism.

Jägerstätter’s mind was utterly formed by the dogmas of the Church – for instance, about the gravity of mortal sin, which separates us from God. After Franz had been sentenced to death by guillotine, his parish priest Fr Ferdinand Fürthauer travelled to Berlin to make a last attempt to get him to change his mind. As Fr Fürthauer later recalled:

I tried to persuade him – Jägerstätter – to enlist in the army after all, for his family’s sake. He said to me: “Can you promise me that if I join that movement I shall not fall into mortal sin?”

“That I cannot do,” I answered.

“Then I won’t enlist,” was his reply.

This is the sort of exchange which A Hidden Life doesn’t include. It is a Christian film inasmuch as its subject is redemptive sacrifice, and its imagery is saturated with biblical themes. But the nature of Franz’s Christianity is obscured.

He was a Christian to his fingertips: most visibly, as the film shows, in his love of neighbour. He would give away the last piece of bread in his meagre prison rations to a fellow inmate. But even more importantly, he loved God, and he loved the Mother of God. Franz was never happier than when a priest brought the Eucharist to his cell. The other prisoners knew him as the man who prayed the rosary, and helped others to pray it too. Traditional devotions meant a lot to him: he was the kind of Catholic who would say things like (in a letter to his wife): “Just think what Jesus has promised to those who keep the nine Sacred Heart of Jesus Fridays.” And – here the film really does shy away from the historical record – he was an eager student of Catholic doctrine. Before his arrest, he wrote a catechism for his children. In prison, he made notes on Scripture, which he assembled into a 208-point document entitled “What every Christian should know”.

Jägerstätter is often described as a “simple farmer”. If he was, then he shows that the Church can turn a simple farmer into a serious thinker who knows what he believes and how to defend it. He was eager to inform himself about his religion – he might have thought differently about Hitler, he once mused, “If I had not read so many Catholic books and journals” – and he tried to be as clear as possible about Catholic doctrine.

In 1942, he recorded his dismay at the failure of Church leaders to speak plainly. “No one offers any clarification, either spoken or written, or rather – it’s forbidden to offer any. And so this unthinking running with the crowd goes on, ever closer to eternity … it isn’t good if our spiritual leaders remain silent for years.” Nobody was standing up, he lamented; instead, they were “silently watching this falsehood as it takes an ever greater hold on everything around it”. What was needed in the Nazi era, he wrote, was for people to ask themselves: “What does our faith teach about all this?”

All of which suggests that Malick is precisely the wrong director for a Jägerstätter biopic. Malick is a poet of the ineffable. The power of music, the mystery of human love, the beauty of a tree reaching towards the sky or of sunlight on an open field – this is the language of his radiant films. But there are times when, to borrow a joke from Douglas Adams, we need to eff the ineffable. Some things are good, other things are bad. Some things are true, other things are false. That was how Franz Jägerstätter, at least much of the time, saw the world. He lived with the outrageous boldness sometimes shown by those who have received the gift of faith; those who know that God has revealed certain things, and therefore we can believe them with 110 per cent confidence.

St John Henry Newman wryly described the early Christian martyrs as “a set of hot-headed young men … who tore down imperial manifestos, broke the peace, challenged the judges to dispute, would not rest till they got into the same den with a lion, and who, if chased out of one city, began preaching in another”. He was exaggerating to make a point: that what looks like hot-headedness may really be evidence of a deep trust in Jesus Christ, and an utter conviction that Catholic dogma is true. “It is faith,” Newman wrote, “that makes martyrs.”

Dan Hitchens is deputy editor of the Catholic Herald