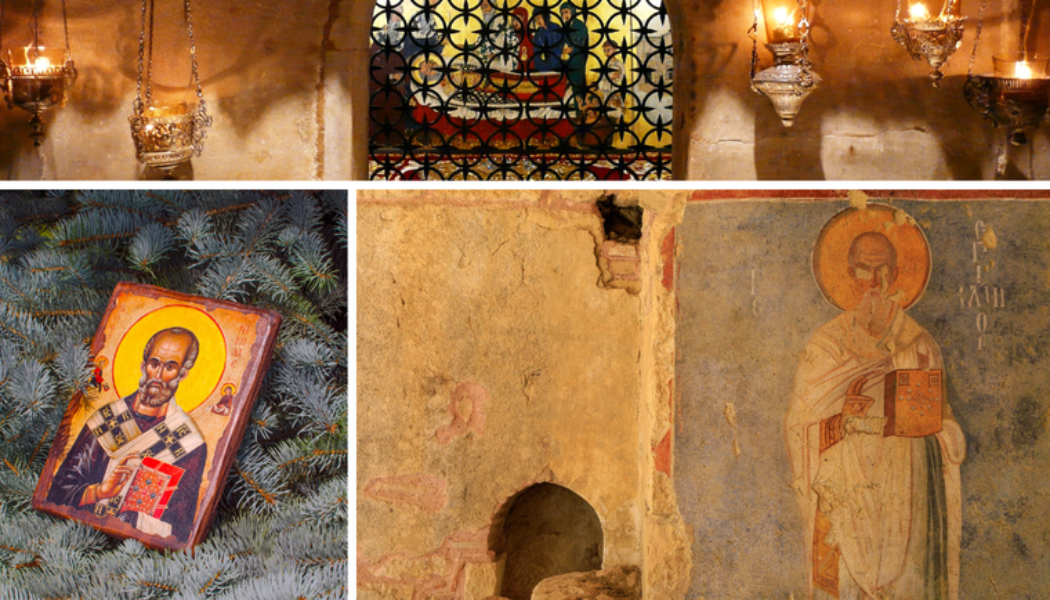 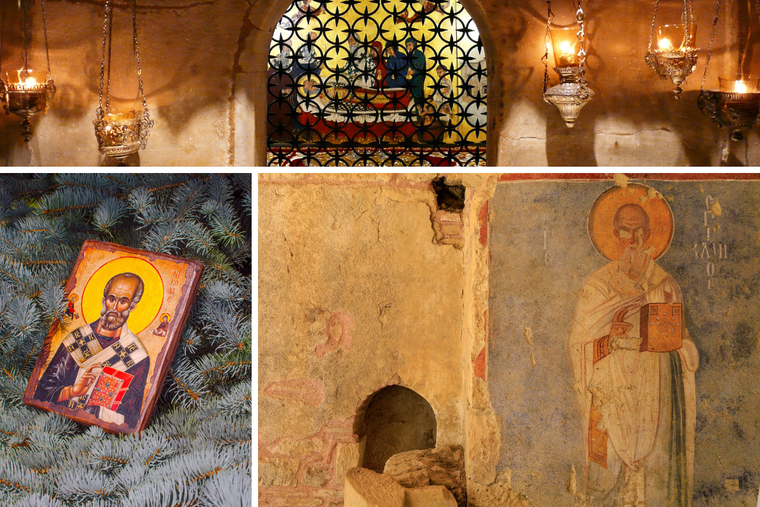 Archaeologists believe they have uncovered the location where the sarcophagus of St. Nicholas of Myra (A.D. 270-343) was originally located. Various media were quick to report that the “Tomb of Santa Claus” was discovered, but, in fact, the many and varied resting places of the great bishop and saint have been known for some time, and his remains were translated to Italy more than a thousand years ago.

The new announcement arises from an excavation that finally cleared centuries of sediment at St. Nicholas Church in Demre, formerly Myra, in the Antalya province of southern Turkey. The church itself was built around 520 over a previous church that had likely served as the bishop’s cathedral and later became his resting place for a time.

As sea levels rose in the Middle Ages, the church was flooded and built up huge deposits of alluvial silts that buried much of it. In the 19th century, portions of the church were excavated and expanded under the patronage of Russian Emperor Nicholas I. It was used until 1923, when the Greeks of Demre, most of whom were Christians, were expelled by the Turks, leaving much of the area abandoned.

The church is in the style of a Roman basilica and modeled after the Church of the Holy Sepulchre in Jerusalem, including an intentionally unfinished dome. Beneath this church are the remains of a previous church which would have been known to St. Nicholas as it likely dates to the third century.

Reaching this church required the removal of 25 feet of silt that had been deposited by the encroaching sea over many years. The current excavations have revealed a fresco and marble floor at the level where the resting place was likely located.

The sarcophagus was no longer in place, but a striking fresco of Jesus and some Greek inscriptions suggested the precise location to the team.

Osman Eravsar, chairman of the Antalya Cultural Heritage Preservation Regional Board, told the Turkish news organization DHA (Demirören Haber Ajansı) that at the time the remains were taken, “the church was damaged. The tomb was probably opened, his bones were removed, and the sarcophagus was placed in a niche on the side of the chapel. Of course, the original place was not there. His sarcophagus must have been placed in a special place and that is the part with three apses covered with a dome. There we have discovered the fresco depicting the scene where Jesus is holding the Bible in his left hand and making the sign of blessing with his right hand.”

The excavation uncovered the “floor of the period [Nicholas] lived in, and we are talking about the floor on which St. Nicholas’ feet stepped,” according to Eravsar. “This is an extremely important discovery, the first find from that period. Therefore, we see this church as a discovery that will increase the architectural history and its iconographic value a bit more. It will be preserved with a certain technique and made ready for display.”

The church remains 6 feet below sea level, which leaves it at risk from occasional flooding.

Sacred to Christians both East and West, it draws thousands of tourists each year to see the ancient frescoes depicting St. Nicholas, as well as a Roman-era sarcophagus, decorated with fish scales and acanthus leaves, believed to have held his remains.

The Relics of Nicholas

Today, the larger bones of the saint are located at the Basilica of St. Nicholas in Bari, Italy, with Venice possessing some of the smaller bones and relics distributed to numerous other churches. The story of their journey is a long and winding one.

It’s probable that his first burial place was a rock-cut tomb on the Mediterranean island of Gemile off the coast of Turkey.

A team studying environmental damage on the island came across a 1,600-year-old pilgrimage site in an area with the ruins of five churches and 40 other ecclesiastical buildings, all dating from the fourth to sixth centuries.

The island had long been associated with St. Nicholas, and his name was found in some of the ruins.

The remains were probably translated to Myra in the mid-600s, when Gemile became vulnerable to attack. Myra, located about 25 miles east of the island, was a logical place to build a new shrine and pilgrimage site due to the saint’s association with it in life. The many miracles attributed to St. Nicholas, whose bones were said to give off a sweet-smelling oil, led to increasing devotion to the saint, and his legend grew with his popularity. Many of the best-known stories — giving away his wealth, striking Arius at the Council of Nicaea, saving three girls by providing their dowry, chopping down a cursed tree, reviving dead children who had been pickled, and more — date to later hagiographies, but were built upon a thriving devotional culture and traditions associated with Nicholas.

In the 11th century, the Seljuks gained control of the region around Myra, and the Greek church fell into schism with Rome. In the chaos of the situation, Italian sailors landed near Myra and took the larger remains, leaving behind smaller pieces.

Greek monks were unable to stop the theft, and the sailors returned to the city of Bari with relics of St. Nicholas.

His remaining bones were taken by Venetians, on their way to First Crusade, and were later enshrined at San Nicolò al Lido in Venice. In Bari, a new church was built to house the saint, and Pope Urban II was present at its consecration and the enshrining of the relics. The location and prominence of this new pilgrimage site, the association of Nicholas with the protection of travelers and sailors, and the many miracles attributed to his intercession caused devotion to him to spread, making him a hugely popular saint in Middle Ages, particularly with Crusaders facing long journeys.

Stories of his generosity multiplied and evolved, and through a complex matrix of popular piety, legend, folklore, the proximity of his feast day (Dec. 6) to Christmas, and the association of his feast with the giving of gifts to children in some cultures, the bishop of Myra gradually became the figure of Santa Claus.

Devotion to the real saint, however, remains strong, with countless churches worldwide dedicated to his patronage.