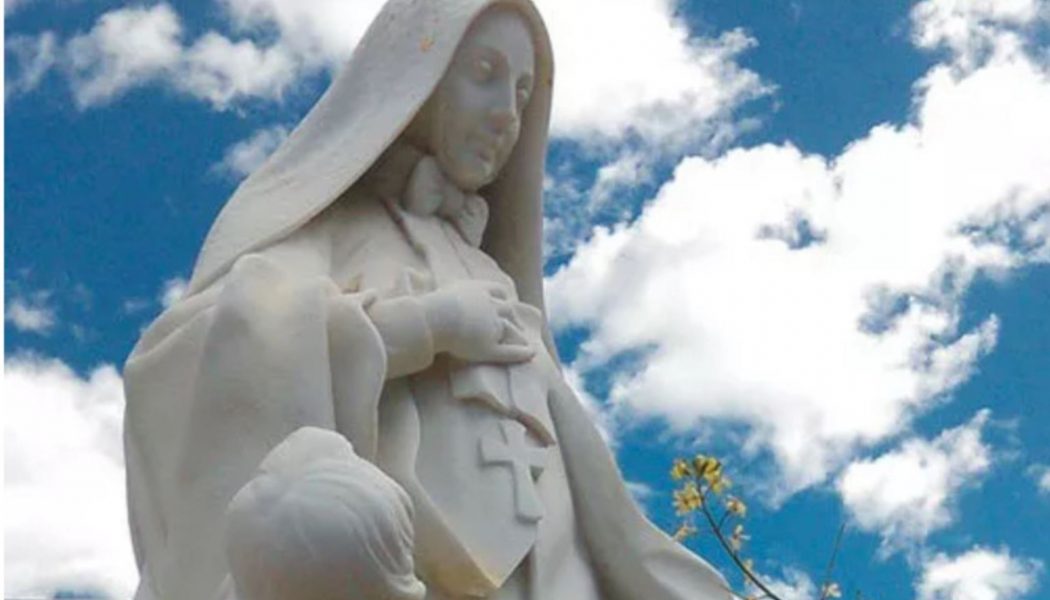 Not far from the St. Frances Xavier Cabrini Shrine where Mother Cabrini is buried, New York state put up a statue where “Mother Cabrini” looks out from Manhattan’s Battery Park toward the Statue of Liberty standing tall, holding her torch aloft, at the mouth of the harbor where many immigrants had first entered the U.S.

St. Frances Xavier Cabrini, born in 1850, founded a missionary order, the Missionary Sisters of the Sacred Heart of Jesus, and 67 institutions, including orphanages, schools and health-care facilities, from New York to Burbank, California, before her death in 1917. Her canonization in 1946 made her the first naturalized U.S. citizen-saint. Accordingly, U.S. Americans are increasingly honoring this Catholic religious as a woman who showed in her life the best of the country’s ideals.

Mother Cabrini, in fact, had been the top choice in a contest to honor famous women who helped build New York organized by the mayor’s wife. But the choice was snubbed, leading to an outcry and the intervention of Gov. Andrew Cuomo, who created the commission that secured the location and artists to create the new statue.

The shrine has planned a series of six Masses in four different languages — English, Italian, Spanish and Filipino — over three days to commemorate Mother Cabrini’s feast, which the Church celebrates on Nov. 13.

The increased attention on Mother Cabrini has brought more individual visitors to the shrine, but the COVID-19 pandemic and safety protocols mean the shrine cannot greet pilgrims coming on the usual big tour buses.

However, the shrine is helping draw people closer to Jesus Christ. Attaway said visitors are drawn to Mother Cabrini, who was “so grounded in the love of Jesus.”

“She started with Jesus, and all the work she did grew out of it,” Attaway said.

A woman in poor health since her youth, Mother Cabrini was not more than 5 feet tall, but this frail woman trusted God to work through her in America. In New York City, Attaway explained, Mother Cabrini’s orphanages provided a place not only for orphans, but also for the children of working families who needed temporary care because they did not have a parent to care for them at home, either due to illness, death or financial circumstances requiring both parents to work. Attaway said Mother Cabrini also made sure teenage girls completed their education and had good-paying jobs, either in service to a family, or as teachers or stenographers, to support themselves in the world.

Attaway said the shrine’s exhibits teach people about the faith, particularly about relics, which draw people “close physically and spiritually” to God and his saints.

“We’re educating people who wander in who aren’t Catholic, or were raised Catholic but don’t know that part of it,” she said.

The shrine’s guest book contains many stories of thanks and gratitude from the pilgrims who come.

Attaway said a forthcoming project will be creating an exhibit on the miracles of Mother Cabrini.

One dramatic miracle involved Peter Smith, a baby born in 1921 whose eyeballs horrifically “dissolved” when a nurse applied the wrong – and highly concentrated – dose of medicine.

After the horrible accident, Smith’s parents obtained a relic of Mother Cabrini and prayed for her intercession.

“The next morning, the baby’s eyes were blue and clear, and he could see,” Attaway said. “He grew up to become a priest. It’s quite an extraordinary story.”

A Place of Peace

Mother Cabrini’s impact is felt to this day in Colorado, where the state Legislature approved making Frances Xavier Cabrini Day a paid state holiday celebrated on the first Monday of October; the Centennial State has dropped Columbus Day, which remains a federal holiday.

“There’s been a real uptick in people who are more aware of her, or know more about her than they did before,” Missionary Sister of the Sacred Heart Roselle Santivasi told the Register. She said Mother Cabrini came to Colorado in 1902 at the invitation of the bishop, who saw a large influx of Italian immigrants coming to the mining towns.

“She did so much with the people here in addition to working with the Italian community,” said Sister Roselle, who is a pastoral minister at the Mother Cabrini Shrine in Golden, Colorado. The shrine is the former site of a summer camp Mother Cabrini established for one of her orphanages.

“The sisters would literally go up to the mines and care for the people there,” Sister Roselle said. “They were very available to the people of Colorado.”

The shrine today has endured the COVID-19 pandemic shutdowns, and while some buildings remain closed, Sister Roselle said many people take advantage of the shrine’s 500 acres to contemplate, pray and experience God’s peace (in a socially distanced way) at the shrine.

“The main thing people say when they come here is how peaceful it is,” Sister Roselle said.

Mother Cabrini Will Protect You

The St. Frances Xavier Cabrini Chapel and Library in Burbank, California — also called locally the Mother Cabrini Shrine — memorializes the furthest west Mother Cabrini traveled and perhaps the closest she ever got to China.

The chapel was originally dedicated to Our Lady, Help of Christians; built in 1916 on a mountaintop for a school later known as the Villa Cabrini Academy, the chapel became the 67th institution founded by Mother Cabrini. The land was sold in 1970, but the Italian Catholic Federation (ICF) helped save the chapel by relocating it to its present place.

“This happened to be the 67th project — this little chapel to the Blessed Mother,” Carmelo Sabatella, president of the ICF’s chapel and library committee. The ICF built the library and gathered Mother Cabrini-related artifacts from the old Villa Cabrini school or donated by families touched by Mother Cabrini in some way.

“People can get a pretty good feel of what things were like when Mother Cabrini was here,” he said.

The shrine usually has its annual pilgrimage celebration on the first Sunday of December, but due to COVID, a virtual pilgrimage will be held instead. And while it won’t be the same, the livestreamed event will allow more people to learn about the shrine and about Mother Cabrini.

“We’re taking it one day at a time,” Sabatella said of the shrine’s course of action amid pandemic. Right now, small groups of pilgrims are possible, but not large groups, such as school field trips.

Sabatella said he is blessed to witness firsthand how much of a difference Mother Cabrini has made. And the library’s artifacts tell story after story of lives changed by Mother Cabrini, more than a century after her passing from this world to the next.

The shrine has a letter written by Mother Cabrini to a woman in Italy. The woman gave the letter to her husband, a soldier in the Italian army, to keep him safe during World War I.

Another woman instructed her son, who fought in the Vietnam War, to “pray to Mother Cabrini; she’ll protect you.” Her son survived fierce battles, and in thanksgiving, he painted a portrait of Mother Cabrini. His mother entrusted the image to the shrine.

“We’re trying to put these stories together,” Sabatella told the Register, noting that Mother Cabrini’s legacy shows what is possible with faith in God.

“And she did all this when she didn’t even speak the [English] language.”