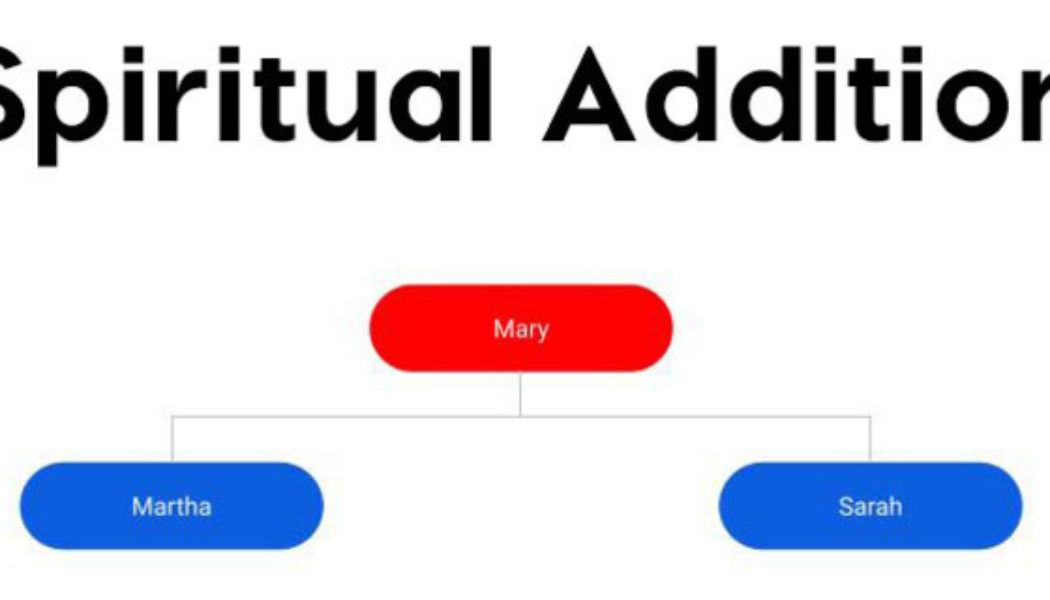 Think of the greatest evangelists (e.g. St. Paul, St. Francis Xavier, or St Teresa of Calcutta) who changed thousands (some tens of thousands) of lives in their lifetimes. Amazing isn’t it? But, it is also a bit overwhelming, because this kind of evangelist is not common and most of us won’t ever be able to live up to such fruitfulness in our lifetimes. But, that isn’t the way in which the vast majority of Christians are called to be fruitful. It is a bit simpler than that.

ADDING THINGS UP
Spiritual addition is the principle that adds disciples one at a time.

Spiritual addition doesn’t go beyond one person at a time. Thus, an evangelist helps lead another person to the point of conversion – that is, they choose to follow Jesus and become a disciple of his (faith is an intentional act of the will). There is nothing wrong with spiritual addition, in fact we should rejoice anytime someone is brought to faith in Jesus. Furthermore, spiritual addition is where most evangelists start. Being the instrument which God uses to convert one person. But, the great Saints and evangelists (and Jesus) didn’t stop there.

Yet, this is the bar of success in most Catholic circles – making a handful of converts. We seek to make a few disciples (not a bad thing!) and then get satisfied and pat ourselves on the back. Yet, this isn’t the bar Jesus set for us as his followers. The Church has always known this, even if she has forgotten to teach it in some times and places, such as our own. The bar is much higher. It is the conversion of many, not just one. Hell is the wide and easy road that many are on. If our hearts don’t break for the lost, then we don’t yet have the heart of Jesus!

At this point most Catholics go back to the excuses:

All of these (and others) are true. Here is the secret…God isn’t asking you to do anything he hasn’t already modeled and taught the Church.

NEW MATH
We see at the very beginning of Jesus’ ministry that he called the fishermen to be fishers of other men. He said, “Follow me, and I will make you fishers of men.” (Matt 4:19). The first step is to “follow“. This decision to follow makes one a disciple. The next step is to be formed into a “fisher of men“. This makes disciples into disciple-makers and then forms other disciples also into disciple-makers. This is spiritual multiplication.

If you were to become a great evangelist, you might have the opportunity to bring many to Jesus. You could personally evangelize the crowds of those around you and heaven would rejoice. Yet, there is a better way. To deeply invest in a handful of people at one time. Thus, forming them to be disciple-makers as well. This is the model of Jesus! He didn’t spend the bulk of his time ministering to the crowds, though he did do so sometimes. Rather, he took 12 followers and made them into “fishers of men” who made other “fishers of men”.

The math bears this out. If you become one of the greatest evangelists of all time and are able to lead 1,000 people to faith every year for 36 years, you would have 36,000 followers of Jesus. Amazing, isn’t it?

Yet there is something much better, if you led 3 people to Jesus, personally discipled them, and raised each person to evangelize and disciple 3 others, and then all of those disciple-makers reached 3 others, then at the end of 36 years, we will have 1,048,576 followers of Jesus!!!

If our goal is to “make disciples of all nations” as we are told to by Jesus, spiritual multiplication is the method Jesus modeled and taught his apostles. St. John discipled Polycarp and Ignatius of Antioch (among those we know he evangelized). Those two became great leaders of the early Church. Ignatius discipled Hippolytus. On and on it goes. Through the ages, the faith is handed down. With faith comes a mission. If we fail to hand on the mission alongside faith, then we neuter, sterilize, and handicap the future of the Church. If we spiritual multiply, then we can once again change the world, as the early Church did within a few generations.

St. Paul is another who modeled spiritual multiplication, by investing in Timothy, Titus, etc. He spells it out in one of his letters to Timothy:
“What YOU have heard from ME before many WITNESSES entrust to FAITHFUL MEN who will be able to teach OTHERS also.” -2 Tim 2:2

Notice that Paul has his eyes on “others”, not just Timothy.

This is how we “make disciples of all nations”, through spiritual multiplication.

METHODS
If you want to become someone who lives out spiritual multiplication, one element that must enter into your formation of disciples you work with is a proper vision. Let them know up front that the point of a small group is to help form them to go and do the same with others. Let them know that your work with them is meant to be a model they can share with others.

Help them to count the cost, by helping them understand the mission they have been given by following Jesus. They too are meant to be “fishers of men”. This means you have to continually remind others that the goal is to reach “others” not just the person in front of them. This helps to form us and others for the real mission.
The world.