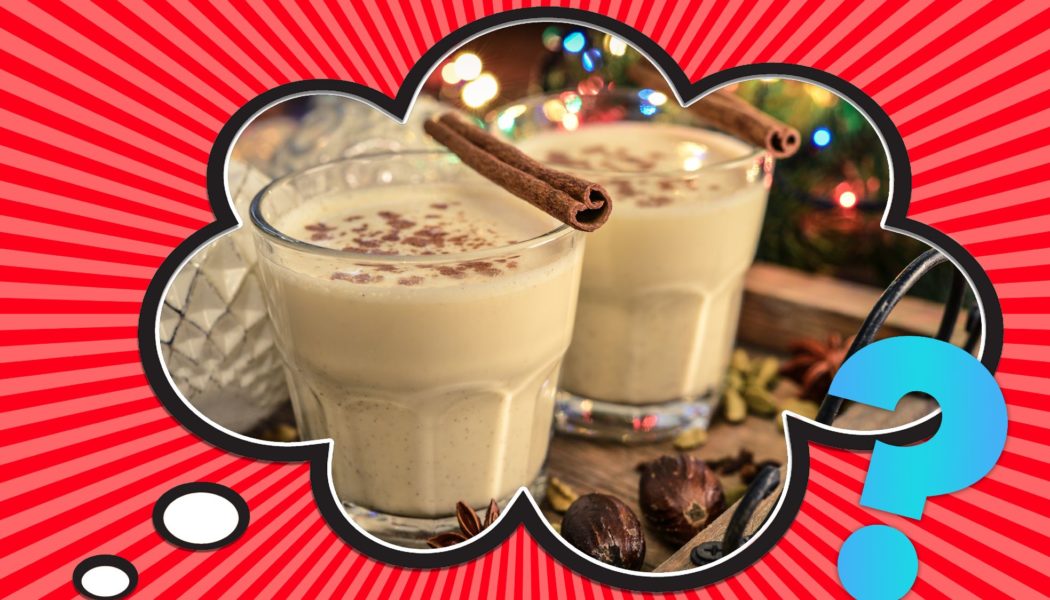 The egg in the word eggnog needs no explanation, but here’s one anyway: Egg is a foundational ingredient in the festive beverage, usually made by combining egg yolks with some other additives (milk, sugar, alcohol, spices) and whisking in beaten egg whites.

The path to eggnog’s second syllable isn’t quite so linear—but there are a few old-fashioned words that may have played a part in its provenance. Before the word noggin became slang for head, it described a small drinking container like a cup or mug. According to the Oxford English Dictionary, the term dates at least as far back as the late 16th century.

By the mid-17th century, people had started using noggin to describe what you might find in a noggin itself: a modest quantity of liquor. As CulinaryLore points out, Robert Louis Stevenson even mentioned the word in Treasure Island, first published in the early 1880s. “ … Jim, you’ll bring me one noggin of rum, now, won’t you, matey?” Billy Bones says to Jim Hawkins, before offering him “a golden guinea for a noggin.”

At that point, the term eggnog had already entered the lexicon, first written in an 1825 novel by John Neal. It’s possible that it came straight from noggin—after all, eggnog did contain spirits, and you’d likely be sipping it from a small drinking vessel. But it’s also possible that the word nog itself factored into the coinage of eggnog. Beginning in the late 17th century, nog showed up as a word of its own, referring to a potent type of beer that usually hailed from Norfolk, England. While today’s eggnog traditionally contains liquor—be it rum, bourbon, or whiskey—the medieval milk drink that inspired it, posset, could also contain ale or wine.

That said, it’s not exactly clear where the word nog originated: It very well may have stemmed from noggin. So even if eggnog was inspired by nog, there’s a good chance that noggin is still part of its origin story.

Another theory posits that grog is actually the key to solving the mystery. In 1740, British admiral Edward Vernon ordered his sailors to start diluting their rum with water so they wouldn’t guzzle their whole ration in one sitting. The sailors had taken to calling the admiral “Old Grog” because he often wore grogram—a rough silken fabric—and they co-opted the word grog for the watered-down drink. (Treasure Island happens to mention grog several times, too.) The term caught on, and it’s been suggested that eggnog is actually a truncation of egg-and-grog.

Whatever the case, ordering a glass of egg-and-grog these days will likely confuse your server much more than asking for nog.

Have you got a Big Question you’d like us to answer? If so, let us know by emailing us at bigquestions@mentalfloss.com.