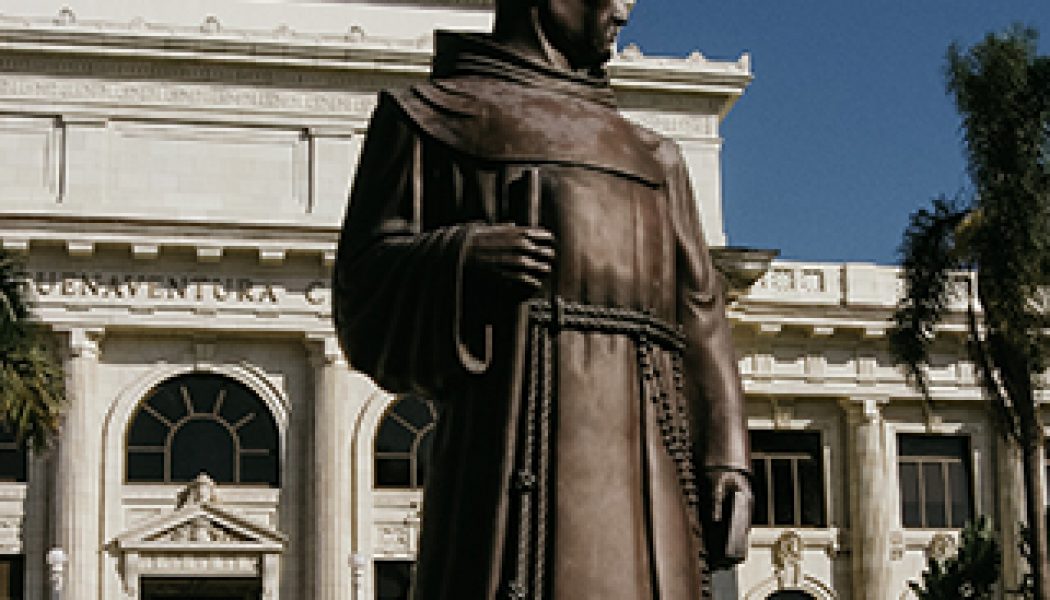 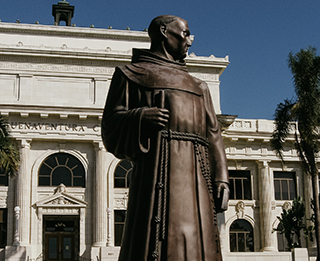 I have just received word that, after voting to remove a large statue of St. Junípero Serra that stands in front of their City Hall, the government of Ventura, California (which is in my pastoral region) is now considering removing the image of Padre Serra from the city seal and from the badges of the Ventura police officers. This entire effort to erase the memory of Serra is from a historical standpoint ridiculous and from a moral standpoint more than a little frightening.

Let me address the ridiculous side first. To state it bluntly, Junípero Serra is being used as a convenient scapegoat and whipping boy for certain abuses inherent to eighteenth-century Spanish colonialism. Were such abuses real? Of course. But was Fr. Serra personally responsible for them? Of course not. I won’t deny for a moment that Serra probably engaged in certain disciplinary practices that we would rightfully regard as morally questionable, but the overwhelming evidence suggests that he was a great friend to the native peoples; that he sought, time and again, to protect them from mistreatment by civil authorities; and that he presided over missions where the indigenous were taught useful skills and were introduced to the Christian faith. To suggest, as did some of those who were petitioning for the removal of his statue, that Serra was the moral equivalent of Hitler and his missions the moral equivalent of concentration camps is nothing short of defamatory.

It is no exaggeration to affirm that from the missions established by Junípero Serra came much of the political and cultural life of the state of California. Many of our greatest cities—San Diego, Los Angeles, San Francisco, Santa Barbara, and yes, Ventura—were built on the foundation of the missions. And I won’t hesitate to say it: the spread of the Christian faith in this part of the world took place largely because of the work of Junipero Serra and his colleagues—and this is a good thing! Jesus told his first followers to go into all the world and preach the Good News, not as a message of oppression but of spiritual liberation. It was precisely in response to that apostolic summons that Fray Junípero left Majorca, crossed the ocean, and spent the remainder of his life proclaiming Christ to those who did not know him. Though it is politically incorrect to say it today, this kind of enthusiastic evangelism is to be celebrated, not excoriated. The majority of Catholics in California today have the faith that they cherish because Padre Serra first brought it here.

And this brings me to the morally dangerous side of this issue. When I saw the videos of Serra statues being torn down, burned, spat upon, trampled, and desecrated in San Francisco and Los Angeles, I shuddered—not only because such behavior was boorish and unjustified, but also because it called to mind very similar activities at earlier stages of American history. In the mid to late nineteenth century, anti-Catholicism was rampant in the United States, due in part to prejudices inherited from Protestantism but also due to the arrival of large groups of immigrants from Catholic countries, who were considered inferior. A powerful political party, the Know-Nothings, was organized precisely around the theme of opposing Catholicism, and in many of the major cities of our country, Catholic convents, parishes, cathedrals, statues, and churches were burned to the ground by unruly mobs. Moreover, in that same period, the Ku Klux Klan, which was active not just in the South but in many northern cities as well, endeavored to terrorize blacks and Jews, of course, but also, it is easy to forget, Catholics. If you doubt that this sort of knee-jerk opposition to Catholicism endured well into the twentieth century, I would recommend you consult some of the histrionic rhetoric used by the opponents of John F. Kennedy during the presidential campaign of 1960. The dean of American historians, Arthur Schlesinger, Sr., summed up this trend in his oft-repeated remark that prejudice against Catholics is “the deepest bias in the history of the American people.”

So when I see mobs of people tearing down and desecrating statues of a great Catholic saint, canonized just five years ago by Pope Francis, how can I not see the ugly specter of anti-Catholicism raising its head? We are passing through a Jacobin moment in our cultural history, and such periods are dangerous indeed, for there is no clear indication what can stop their momentum. So in this case, what’s next? Shall we tear down the missions themselves, the moral equivalents of death camps? Shall we call into question the Catholic faith and institutions that Junípero Serra brought to these shores? One can only hope that cooler heads will prevail and that responsible people might bring to an end this ridiculous and dangerous attempt to erase Padre Serra.