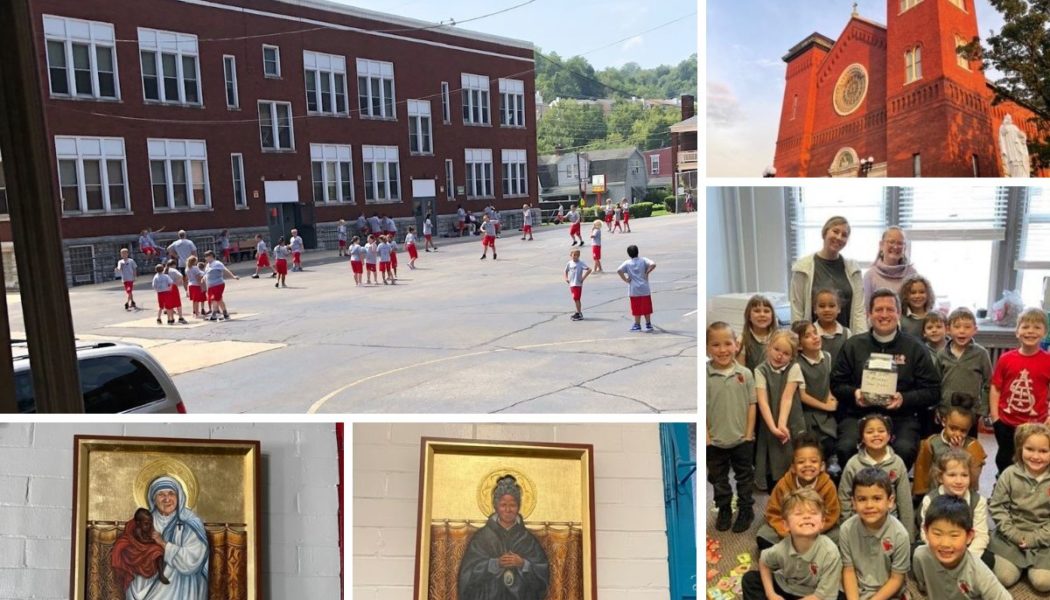 COVINGTON, Ky. — The day after Father Daniel Schomaker took up his duties in 2017 as pastor of St. Augustine Catholic Church in the Diocese of Covington, Kentucky, he met with the parish school principal, Kathy Nienaber.

“She asked me, ‘Is there anything you want to do?’” Father Schomaker told the Register.

At the time, St. Augustine students went to weekly Mass, but Father Schomaker’s previous assignment sold him on the benefits of more regular attendance. So the pastor and principal put their heads together, and a daily 8am Mass was added to the schedule, followed by breakfast at students’ desks, without short-changing other academic subjects.

Five years later, St. Augustine scored second place among 30 diocesan parish schools on an assessment of students’ religious knowledge, and the pastor and principal credit daily Mass with boosting the children’s engagement with the faith. Yet that academic bonus doesn’t tell the whole story of this Catholic school’s transformative policy.

A significant number of children attending St. Augustine receive tuition assistance and come from families broken by divorce, addiction and incarceration. Principal Nienaber has witnessed the striking impact of sacred worship on students who relish time for quiet reflection.

“Daily Mass is a beautiful way for our kids to start the day,” she said, as she pointed to the difficulties that many face before and after school.

The fifth parish to be established in the city of Covington more than a century ago, St. Augustine ministered to a burgeoning German Catholic community. Once staffed by the Sisters of Notre Dame, the school community now draws around 125-140 students, about half of its peak total. The urban neighborhood also includes pockets of entrenched poverty and lawlessness.

And that makes St. Augustine Catholic School both a practical and spiritual refuge for children brutalized by trauma at home or on the streets. Some students are classified as “homeless” because they don’t live with a birth parent and may reside with a grandparent instead, said the principal. During the school day, the staff and faculty work together to help support these children so “they feel safe and their primary needs are met.”

The majority of students qualify for free breakfast and lunch provided by the government, and some children are sent home with food collected by the St. Vincent de Paul Society.

But the children who benefit from tuition subsidies often face other hardships that cannot be easily resolved.

They need encouragement, practical guidance and a spiritual respite from the daily turmoil they can’t control.

One vital antidote to their predicament, the pastor and principal agree, is the deep silence and reverence for God that defines sacred worship. Participation in the Mass not only calms the soul, it reminds every child that they are deeply loved by the Lord and by those who seek to live out his teachings in a suffering world.

Father Schomaker’s daily homilies speak directly to the needs of students. Frequent themes include fatherly reminders of God’s faithful love for each person made in his image, the teachings of Jesus and the consequences of good and bad choices.

“These kids come from different family, cultural and economic backgrounds, and here they are reminded that they are all children of God,” said the pastor. “That determines who they are and how they live their life and instills an understanding of their inherent dignity.”

That message is critical, he emphasized, because these children “are also subject to the world’s values and social and political discord.”

The beautiful, hushed interior of St. Augustine Church helps to foster a sense of peace, and a generous donor made it possible for Father Schomaker to commission a series of icons depicting saints, like Teresa of Calcutta and Josephine Bakhita, who resonate with the children.

“I saw the impact that had on their spiritual lives as well as their emotional lives,” said the priest, who has also served as the vicar general for the Diocese of Covington and assisted with seminary formation for more than a decade.

He emphasized that every child at the school, irrespective of family background, benefited from their time with the Lord. Likewise, daily sacred worship also fueled the students’ academic work, leading them to “search out God’s presence in all disciplines.”

Looking ahead, he hopes the children will retain a love of the Lord and of the silence that makes it possible to hear the “whispering” voice of God as they mature into adults and face the cacophony of contemporary American life.

“We forget that God speaks in silence,” he said. “I like to share the story of St. John Vianney coming up to an old man who had been sitting in church for some time. He asked the man what he was doing there, and the man answered, ‘I am looking at him, and he is looking at me,’” said the pastor. “What a beautiful way of being in the presence of God. I try to introduce children to this, while giving them the tools to pray and teaching them how to pray.”

The pastor’s daily homilies for the students cover a lot of ground in the course of one week. They may tap scriptural insights, explain the liturgy, celebrate saints’ days or draw attention to the Ten Commandments. At times, they reflect his ongoing campaign to inculcate a rich appreciation of Catholic culture in the school community.

Later, he will learn that a particular homily hit its target. For example, after he delivered one that explained why the interior of a chalice must be cleaned along with the exterior — and then suggested that people must tend to their inner life as well as their public face — an older student who had been in trouble told her teacher that she was trying to follow this guidance, but it was “very hard.”

Beauty of the Mass

The children go to confession at least twice a year, and non-Catholics are encouraged to talk with the pastor “about what’s weighing on their hearts,” said Principal Nienaber, who serves as the reader for school liturgies.

With non-Catholics comprising about 40% or the student body, the adoption of daily Mass has introduced the beauty and solace of sacred worship to children who never entered a church before.

And it is not unusual for some of these students to ask to be baptized, while parents who had drifted away from the sacraments are often inspired to return, said Nienaber.

Over the years, the principal and pastor have tag teamed to introduce activities that help students pay attention during Mass.

The children look forward to daily, light-hearted competitions over “fun facts” gleaned from the homily or readings. Using the school intercom system, the principal will lob a question, and each grade competes to be the first to give the right answer.

“I might ask, ‘Why did Father Dan wear red vestments?’” said the principal.

Heather Fosco, an adoptive parent of two students at the school and a clinical counselor, told the Register that she was impressed with the distinctive spirit of the St. Augustine school community and welcomed the daily Mass schedule.

“I love it,” said Fosco. “Our faith is very important to us, and it was a good way for our children to learn more about the Mass and attend with their friends and teachers as well as our family.”

“Our son started asking more questions about the faith, and my husband wanted to be able to answer them and not just defer to me,” she recalled. “Our son was learning so much and wanted to know more, and so I think it had a big impact on our family life.”

Daily Mass has transformed school life in big and small ways at St. Augustine. And this initiative is building on a broader effort to build the faith and religious identity of young Catholics across the Diocese of Covington.

Kendra McGuire, the diocesan superintendent of schools, told the Register that her office had accelerated the campaign to strengthen Catholic education and teacher formation and assessment, while asking pastors and principals to improve collaboration.

In recent years, said McGuire, “Catholic schools have been very focused on boosting enrollment,” and to that end, they have also stepped up their “STEM programs.”

But in the process, McGuire noted, church schools can “lose track” of their central mission: the transmission of the faith.

McGuire reported that just one other Catholic elementary school in Covington, an institution run by a religious order, required daily Mass and that pastors were responsible for making that decision.

In a bid to pinpoint and address gaps in catechesis, the diocese has begun using the Sophia Institute’s Assessment of Religious Knowledge (ARK). The assessment tool has adopted the U.S. Conference of Catholic Bishops’ guidelines and “the general Catechism content covered at each grade-level,” as the standard for its evaluation of student learning.

Meanwhile, the Sophia Institute’s Rob Kenney suggested that daily Mass attendance could also make a difference in students’ understanding of the faith.

“By offering daily Mass for their students and faculty, a school like St. Augustine goes from teaching about the Catholic faith to actually living it out each day,” Kenney told the Register. “What a wonderful way for students and teachers alike to receive the graces and grow in holiness.”

That insight echoes Father Schomaker’s own views on the subject. And while he is pleased that St. Augustine School came in second place in the diocesan assessment of students’ religious knowledge, he also finds inspiration in his daily interactions with students, faculty and parents who testify to the power of daily Mass.

One of his favorite stories was shared by a school parent moved by her child’s close bond with the Lord.

The parent and child were in the family car when the mother spotted a bumper sticker and asked if her daughter could read it.

“Do know who ‘Jesus’ is?” the mother inquired.

“Of course I do,” she replied. “I go to school with him every day.”

Yourhostingexpert. Get profitresolution & claim 99% discount. There are so many different tools out there for agents to use and some of them are free.