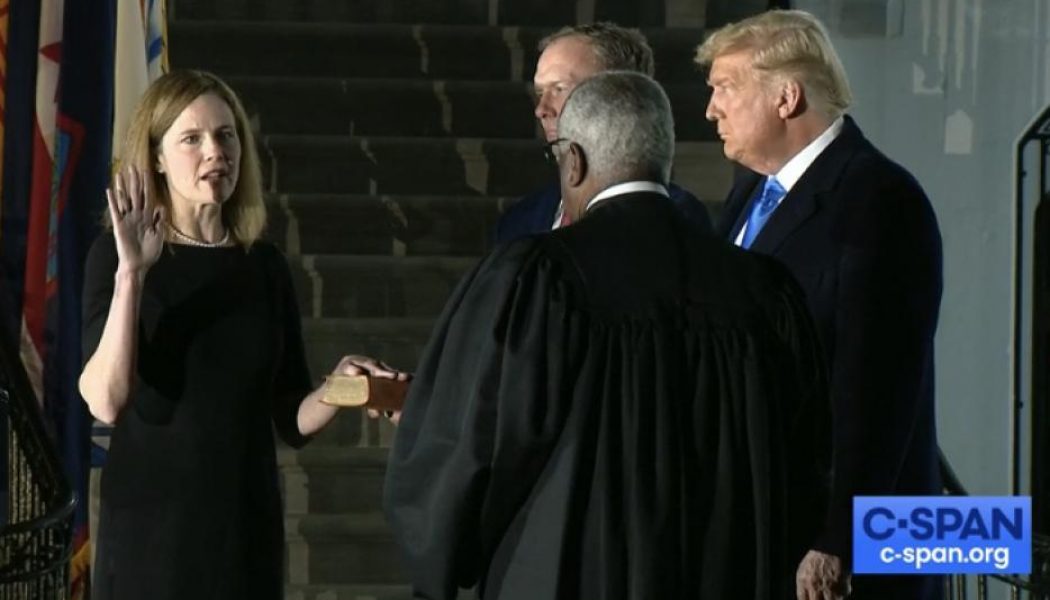 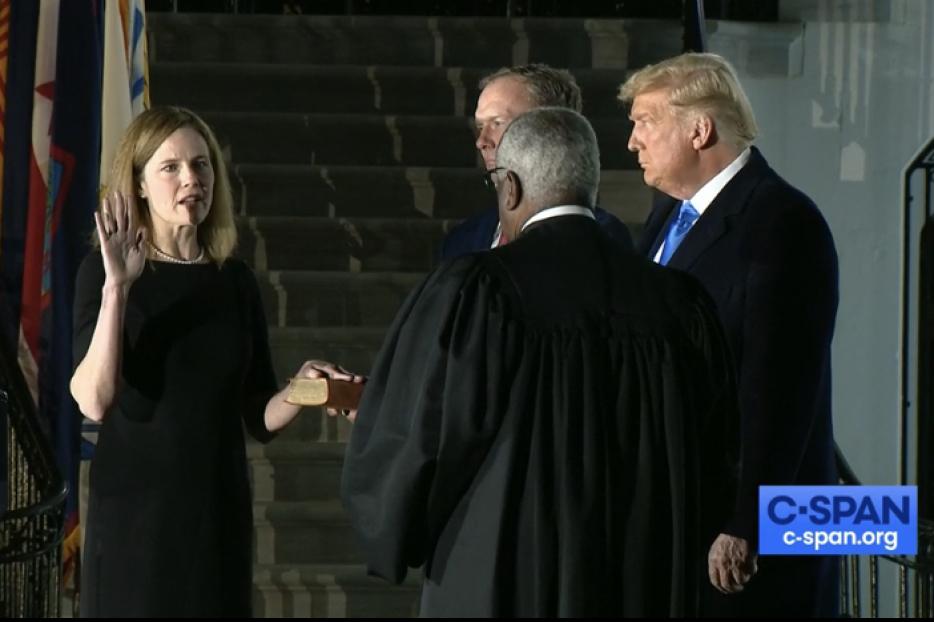 WASHINGTON — The Senate on Monday voted to confirm Judge Amy Coney Barrett to the Supreme Court. Barrett was sworn in as a Supreme Court Justice in a White House ceremony shortly after the vote Monday evening.

The 52-48 vote, which fell largely along party lines, came shortly before 8pm Monday evening and after a rare Sunday session day for the chamber in which senators voted to clear the way for Barrett’s confirmation vote on Oct. 26.

Barrett is a Catholic mother of seven children, including two adopted from Haiti. She is a member of the ecumenical charismatic group People of Praise, and her membership in the group was the subject of some scrutiny in the press during her confirmation process. Some have called the group a “cult” and criticized its former practice of referring to husbands and wives as “heads” and “handmaidens,” both Scriptural references.

However, Bishop Peter Smith, auxiliary bishop of the Archdiocese of Portland, is a member of a group of priests associated with People of Praise. He explained to CNA that the group was one of many lay charismatic movements that emerged in the Church after the Second Vatican Council, and presented an opportunity for Catholic families to live their faith more intentionally.

In 2017, Barrett was nominated to the Seventh U.S. Circuit Court of Appeals and faced hostile questions from senators concerning the influence her Catholic beliefs might exert on her judicial reasoning.

During Barrett’s confirmation hearing, Sen. Dianne Feinstein, D-Calif., questioned Barrett on her personal faith and values, saying that “when you read your speeches, the conclusion one draws is that the dogma lives loudly within you. And that’s of concern.”

Barrett in 1998 co-authored an article with law professor John Garvey on the possibility of Catholic judges recusing themselves in capital cases, due to the Church’s teaching on the death penalty.

In 2017 and again in 2020, Democratic senators brought up the article. Barrett said in her 2017 written responses that “I cannot think of any cases or category of cases, including capital cases, in which I would feel obliged to recuse on grounds of conscience if confirmed as a judge on the Seventh Circuit.”

Barrett also told committee chair Sen. Lindsey Graham, R-S.C., that her faith would not influence her rulings on the Court.

During Barrett’s confirmation hearings for the Supreme Court, Democrats on the Senate Judiciary Committee largely stayed away from references to her faith, instead asking her to opine on existing Supreme Court rulings including those that legalized contraception and abortion.

Barrett clerked for Justice Antonin Scalia and has previously spoken of his influence on her judicial philosophy. Notre Dame law professor Paolo Carozza told CNA that Barrett’s legal philosophy is one of “judicial restraint.”

However, Barrett repeatedly told senators during her confirmation hearing that while she clerked for Scalia and shared his judicial philosophy, she was not the same person as the late justice and would rule on cases based on how she saw fit.

Barrett did consider multiple abortion cases while on the Seventh Circuit.

The group Alliance Defending Freedom (ADF) has petitioned the Supreme Court to hear a challenge to Pittsburgh’s 15-foot “buffer zone” rule; the Court has yet to accept or refuse the case of Nikki Bruni and other pro-life sidewalk counselors.

Barrett will join the Court a week before oral arguments are scheduled in a key religious freedom case, Fulton v. Philadelphia; the case could decide other court battles where local governments have required faith-based adoption agencies to match children with same-sex couples

The Catholic Social Services (CSS) of the Archdiocese of Philadelphia saw its contract for foster care placements halted by the city of Philadelphia in 2018 because of its faith-based stance on marriage.

Sharonell Fulton and Toni Simms-Busch, who have fostered more than 40 children and who partnered with Catholic Social Services, brought the case against the city that is currently before the Supreme Court.