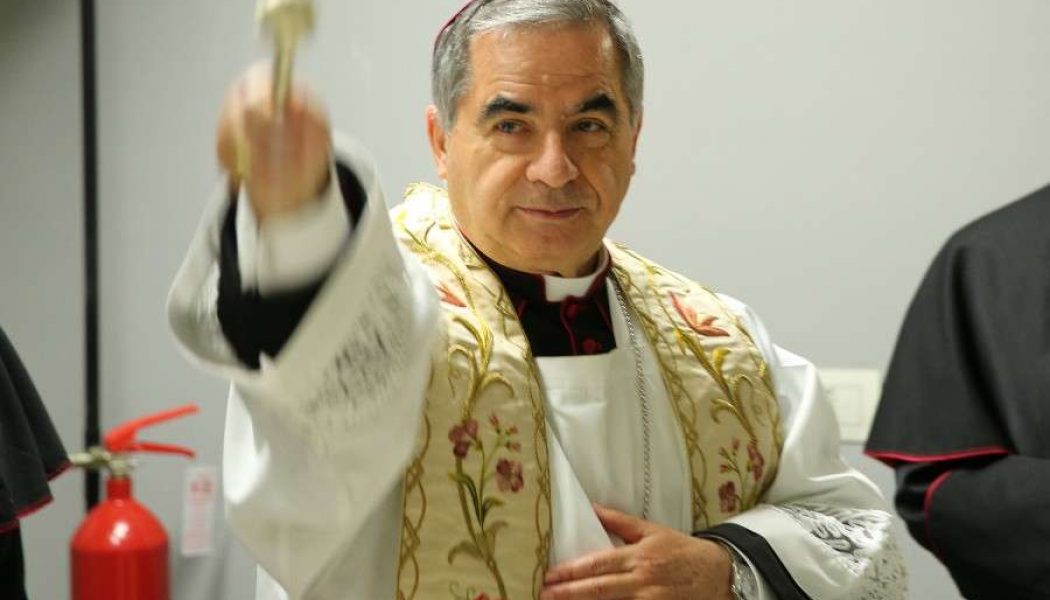 Portfolio statements show that Becciu used millions of euros of Vatican charity funds in speculative and risky investments, and that he directed Vatican and Italian bishops’ money to go toward “loans” for projects owned and operated by his brothers.

Becciu resigned as prefect of the Vatican’s Congregation for the Causes of Saints and from the rights extended to members of the College of Cardinals Sept. 24.

The cardinal previously served as “sostituto,” or second-ranking official at the Secretariat of State, from 2011 to 2018.

After his resignation, Becciu told the Italian newspaper Il Messaggero he was “shocked” and “troubled.” He called his resignation “a blow for me, for those who know and respect me, and for my family.”

CNA has reported that during his tenure as “sostituto,” Becciu used loans from several Swiss banks, including BSI and Credit Suisse, to at least partially finance the controversial purchase of a building at 60 Sloane Avenue in London.

Becciu said Friday that the Vatican “found nothing” on him regarding the London building transaction, and other accusations “have no criminal offence.”

“Out of a spirit of obedience and out of love for the Church and the pope, I accepted his request to step aside,” he said. “But I am innocent and I will prove it. I ask the Holy Father to have the right to defend myself.”

A new report by the Italian weekly L’Espresso showed that Becciu gave financier Enrico Crasso, a former manager of Credit Suisse, control over millions of euros of Vatican investment funds from the Secretariat of State and from the papal charity Peter’s Pence.

Crasso is also the manager of Centurion Global Fund, an investment fund used by the Secretariat of State, with links to two Swiss banks investigated or implicated in bribery and money laundering scandals. As CNA reported, this is the same fund in which the Vatican Secretariat of State invested millions of euros, including with money donated to Peter’s Pence.

Reports show that the fund’s investments lost money while its managers, who include Crasso, recouped millions in fees. Centurion investment fund has been under investigation by Vatican authorities since December 2019.

According to L’Espresso, Crasso directed Vatican money into highly speculative funds with low return margins and based in tax havens.

The weekly said that Becciu also used Peter’s Pence money and funds from the Italian bishops’ conference to finance projects owned and operated by three of his brothers.

L’Espresso reported that Becciu obtained two loans from the Italian bishops’ conference to pay out two non-repayable loans of 300,000 euros each to Spes Cooperative in 2013 and 2015.

There appear to be questions around whether these funds were used for their ostensible charitable purposes.

The bishop of Ozieri and president of the diocesan Caritas, Corrado Melis, said in a statement addressed to Becciu Sept. 24 that the diocesan Caritas “has never been the beneficiary” of undue or illegitimate favor, and that it has “never used a single penny” of funds given for charitable works for other purposes.

Becciu himself denied any guilt, saying that he “may have made a mistake out of too much love for my diocese, but I do not see the crime. I am ready to shout the truth,” Il Fatto Quotidiano reported.

A second instance of Becciu working in the favor of a brother reportedly occurred when he was papal nuncio in Angola and later in Cuba, when the carpentry company of Becciu’s brother, Francesco, was hired to furnish and repair several churches in the two countries.

Becciu also reportedly helped to bring in customers for Angel’s srl, a specialty food and beverage distributor, of which another brother, Mario, is majority partner and legal representative.

The Becciu family put out a statement Friday saying that news reports that members of their family received financial favors from their brother, the cardinal, were “unfounded and maliciously false, in particular for the imaginative and unprovable references to alleged donations from Peter’s Pence.”

Reportedly, the large proceeds of the companies of the Becciu brothers were later reinvested in low-risk safe-haven equity, holding and financial packages. Income generated from these investments was then reinvested in funds previously invested in by the Secretariat of State, such as the Centurion Fund.

Vangelisti was involved in the Vatican’s purchase of the Sloane Avenue property in London, together with the director of Valeur capital, Alessando Noceti, who used to work for Suisse Credit in London.

This was not the only time that Becciu has faced accusations that he used his position to benefit family members. CNA reported last year about the hiring of Becciu’s niece, Maria Piera Becciu, as the personal secretary of Fr. Franco Decaminada, the former president of an Italian hospital, also linked to a Vatican financial scandal.

Decaminada had approached Becciu in 2011, shortly after he started his role at the Secretariat of State, asking him for support on a proposal that the Vatican supply the failing Istituto Dermopatico dell’Immacolata (IDI), with 200 million euros.

Decaminada was then a senior member of the Sons of the Immaculate Conception, the order which then owned and oversaw the IDI. He was arrested in 2013 and sent to prison for his part in the massive fraud and corruption around IDI’s collapse, and eventually laicized.

As reported by CNA in 2019, Becciu has also been accused of attempting to disguise millions of euros in loans on the Vatican balance sheets by canceling them out against the value of the London property, an accounting maneuver prohibited by financial policies approved by Pope Francis in 2014.

The loans, acquired through Swiss banks, triggered an internal dispute between the Secretariat of State and Vatican financial authorities, in particular, with Cardinal George Pell, who was then responsible for the Secretariat for Economy.

In a statement following Becciu’s resignation Thursday, Pell said he hoped that “the cleaning of the stables continues in both the Vatican and Victoria.”

“The Holy Father was elected to clean up Vatican finances. He plays a long game and is to be thanked and congratulated on recent developments,” he said from Sydney, Australia.