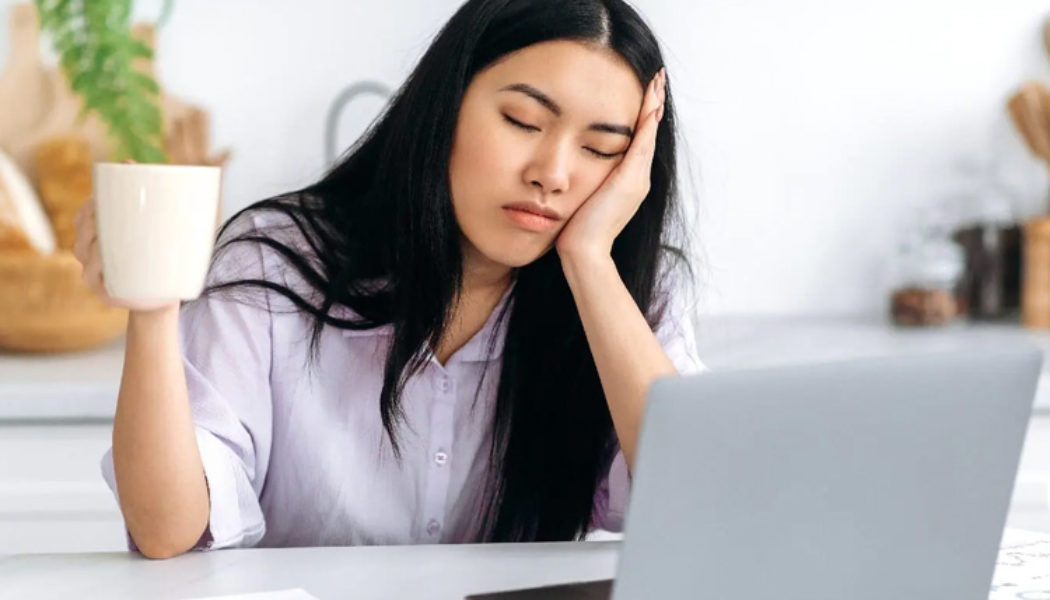 Many people who find it hard to wake up in the morning blame it on their constitution or their genes. But how you slept, what you ate for breakfast and the amount of physical activity you engaged in the day before have a lot more to do with your ability to wake up alert. (Shutterstock image)

Do you feel groggy until you’ve had your morning joe? Do you battle sleepiness throughout the workday?

You’re not alone. Many people struggle with morning alertness, but a new study demonstrates that awaking refreshed each day is not just something a lucky few are born with. Scientists at the University of California, Berkeley, have discovered that you can wake up each morning without feeling sluggish by paying attention to three key factors: sleep, exercise and breakfast.

The findings come from a detailed analysis of the behavior of 833 people who, over a two-week period, were given a variety of breakfast meals; wore wristwatches to record their physical activity and sleep quantity, quality, timing and regularity; kept diaries of their food intake; and recorded their alertness levels from the moment they woke up and throughout the day. Twins — identical and fraternal — were included in the study to disentangle the influence of genes from environment and behavior.

The researchers found that the secret to alertness is a three-part prescription requiring substantial exercise the previous day, sleeping longer and later into the morning, and eating a breakfast high in complex carbohydrates, with limited sugar. The researchers also discovered that a healthy controlled blood glucose response after eating breakfast is key to waking up more effectively.

Morning grogginess is more than just an annoyance. It has major societal consequences: Many auto accidents, job injuries and large-scale disasters are caused by people who cannot shake off sleepiness. The Exxon Valdez oil spill in Alaska, the Three Mile Island nuclear meltdown in Pennsylvania and an even worse nuclear accident in Chernobyl, Ukraine, are well-known examples.

“Many of us think that morning sleepiness is a benign annoyance. However, it costs developed nations billions of dollars every year through loss of productivity, increased health care utilization, work absenteeism. More impactful, however, is that it costs lives — it is deadly,” said senior author Matthew Walker, UC Berkeley professor of neuroscience and psychology. “From car crashes to work-related accidents, the cost of sleepiness is deadly. As scientists, we must understand how to help society wake up better and help reduce the mortal cost to society’s current struggle to wake up effectively each day.”

Vallat, Walker and their colleagues published their findings last week in the journal Nature Communications. Walker, the author of the international bestseller, Why We Sleep, runs one of the world’s preeminent sleep research labs, the Center for Human Sleep Science, and is a member of the Helen Wills Neuroscience Institute at UC Berkeley.

A personalized approach to eating

Walker and Vallat teamed up with researchers in the United Kingdom, the U.S and Sweden to analyze data acquired by a UK company, Zoe Ltd., that has followed hundreds of people for two-week periods in order to learn how to predict individualized metabolic responses to foods based on a person’s biological characteristics, lifestyle factors and the foods’ nutritional composition.

A simple prescription for how best to wake up each day:

1) get substantial exercise the day before;
2) sleep longer and later than you typically do;
3) eat a low sugar breakfast rich in complex carbohydrates, with a moderate amount of protein;
4) pay attention to your body’s glucose response after eating.

The participants were given preprepared meals, with different proportions of nutrients incorporated into muffins, for the entire two weeks to see how they responded to different diets upon waking. A standardized breakfast, with moderate amounts of fat and carbohydrates, was compared to a high protein (muffins plus a milkshake), high carbohydrate or high sugar (glucose drink) breakfast. The subjects also wore continuous glucose monitors to measure blood glucose levels throughout the day.

The worst type of breakfast, on average, contained high amounts of simple sugar; it was associated with an inability to wake up effectively and maintain alertness. When given this sugar-infused breakfast, participants struggled with sleepiness.

In contrast, the high carbohydrate breakfast — which contained large amounts of carbohydrates, as opposed to simple sugar, and only a modest amount of protein — was linked to individuals revving up their alertness quickly in the morning and sustaining that alert state.

“A breakfast rich in carbohydrates can increase alertness, so long as your body is healthy and capable of efficiently disposing of the glucose from that meal, preventing a sustained spike in blood sugar that otherwise blunts your brain’s alertness,” Vallat said

“We have known for some time that a diet high in sugar is harmful to sleep, not to mention being toxic for the cells in your brain and body,” Walker added. “However, what we have discovered is that, beyond these harmful effects on sleep, consuming high amounts of sugar in your breakfast, and having a spike in blood sugar following any type of breakfast meal, markedly blunts your brain’s ability to return to waking consciousness following sleep.”

It wasn’t all about food, however. Sleep mattered significantly. In particular, Vallat and Walker discovered that sleeping longer than you usually do, and/or sleeping later than usual, resulted in individuals ramping up their alertness very quickly after awakening from sleep. According to Walker, between seven and nine hours of sleep is ideal for ridding the body of “sleep inertia,” the inability to transition effectively to a state of functional cognitive alertness upon awakening. Most people need this amount of sleep to remove a chemical called adenosine that accumulates in the body throughout the day and brings on sleepiness in the evening, something known as sleep pressure. In the new study, Vallat, Walker and their colleagues looked at the influence of genes and non-genetic factors, including environment, on alertness upon waking. By measuring how alertness varies among individuals and in the same individual on different days, they were able to tease out the role played by exercise, sleep, type of breakfast and a person’s glucose response after a meal. (Graphic credit: Raphael Vallat and Matthew Walker, UC Berkeley)

“Considering that the majority of individuals in society are not getting enough sleep during the week, sleeping longer on a given day can help clear some of the adenosine sleepiness debt they are carrying,” Walker speculated.

“In addition, sleeping later can help with alertness for a second reason,” he said. “When you wake up later, you are rising at a higher point on the upswing of your 24-hour circadian rhythm, which ramps up throughout the morning and boosts alertness.”

It’s unclear, however, what physical activity does to improve alertness the following day.

“It is well known that physical activity, in general, improves your alertness and also your mood level, and we did find a high correlation in this study between participants’ mood and their alertness levels,” Vallat said. “Participants that, on average, are happier also feel more alert.”

But Vallat also noted that exercise is generally associated with better sleep and a happier mood.

“It may be that exercise-induced better sleep is part of the reason exercise the day before, by helping sleep that night, leads to superior alertness throughout the next day,” Vallat said.

Walker noted that the restoration of consciousness from non-consciousness — from sleep to wake — is unlikely to be a simple biological process.

“If you pause to think, it is a non-trivial accomplishment to go from being nonconscious, recumbent and immobile to being a thoughtful, conscious, attentive and productive human being, active, awake, and mobile. It’s unlikely that such a radical, fundamental change is simply going to be explained by tweaking one single thing,” he said. “However, we have discovered that there are still some basic, modifiable yet powerful ingredients to the awakening equation that people can focus on — a relatively simple prescription for how best to wake up each day.”

It’s not in your genes

Comparisons of data between pairs of identical and non-identical twins showed that genetics plays only a minor and insignificant role in next-day alertness, explaining only about 25% of the differences across individuals.

“We know there are people who always seem to be bright-eyed and bushy-tailed when they first wake up,” Walker said. “But if you’re not like that, you tend to think, ‘Well, I guess it’s just my genetic fate that I’m slow to wake up. There’s really nothing I can do about it, short of using the stimulant chemical caffeine, which can harm sleep.

“But our new findings offer a different and more optimistic message. How you wake up each day is very much under your own control, based on how you structure your life and your sleep. You don’t need to feel resigned to any fate, throwing your hands up in disappointment because, ‘… it’s my genes, and I can’t change my genes.’ There are some very basic and achievable things you can start doing today, and tonight, to change how you awake each morning, feeling alert and free of that grogginess.”

Walker, Vallat and their colleagues continue their collaboration with the Zoe team, examining novel scientific questions about how sleep, diet and physical exercise change people’s brain and body health, steering them away from disease and sickness.

Other co-authors of the paper are Sarah Berry, Paul Franks and Tim Spector of King’s College London; Neli Tsereteli of Lund University in Malmö, Sweden; Joan Capdevila, Haya Al Khatib and Jonathan Wolf of Zoe Ltd.; Ana Valdes of the University of Nottingham in the U.K.; and Linda Delahanty, David Drew and Andrew Chan of Massachusetts General Hospital and Harvard Medical School in Boston. The study was funded by Zoe Ltd. and the Department of Twin Studies at King College London.