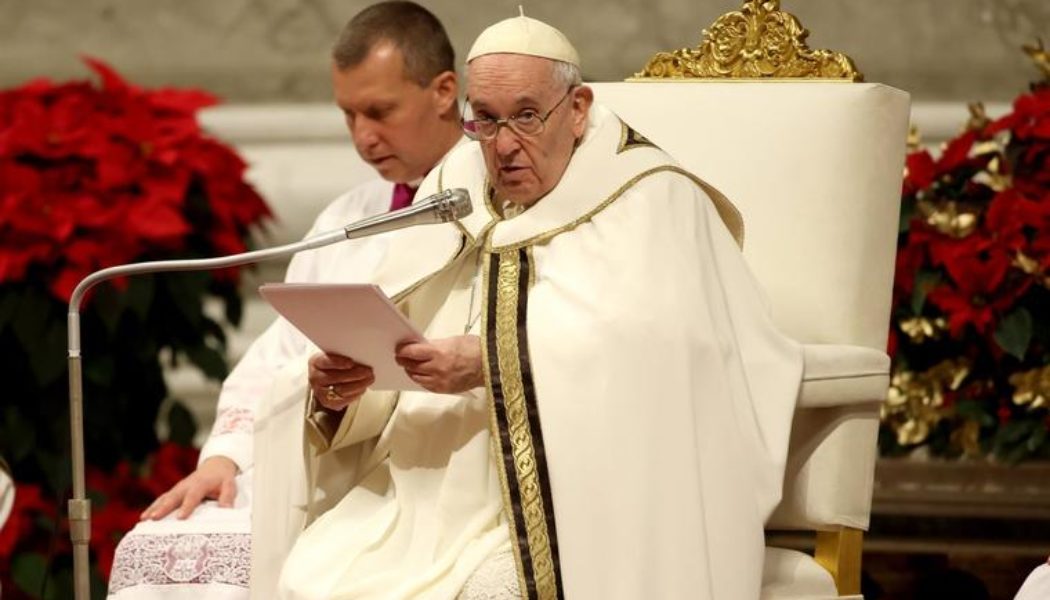 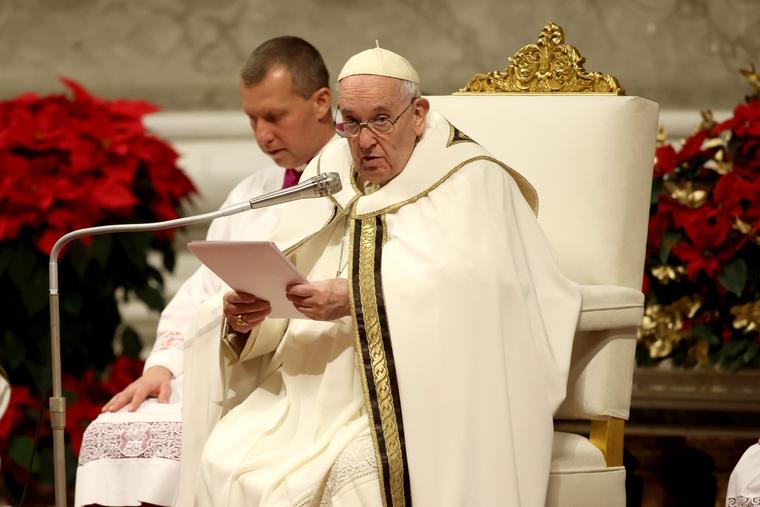 The Holy Father celebrated the Solemnity of the Nativity of the Lord with Mass during the night, held in St. Peter’s Basilica on Dec. 24.

A manger, the Christ Child’s first resting place, can teach us a lot about the meaning of Christmas, Pope Francis said in his Christmas homily.

“In order to rediscover the meaning of Christmas, we need to look to the manger,” he said on Dec. 24.

“Yet why is the manger so important? Because it is the sign, and not by chance, of Christ’s coming into this world,” he said. “It is how he announces his coming. It is the way God is born in history, so that history itself can be reborn.”

Pope Francis celebrated the Solemnity of the Nativity of the Lord with Mass during the night, held in St. Peter’s Basilica at 7:30pm on Dec. 24.

“The Christmas manger, the first message of the Divine Child, tells us that God is with us, he loves us, and he seeks us. So take heart,” the Pope said. “Do not allow yourself to be overcome by fear, resignation or discouragement. God was born in a manger so that you could be reborn in the very place where you thought you had hit rock bottom. There is no evil, there is no sin, from which Jesus does not want to save you.”

The Christmas Mass, which had around 7,000 people in attendance, according to the Vatican, began with the chanting of the traditional Kalenda Proclamation of the Birth of Christ from the Roman Martyrology. A statue of the Baby Jesus, displayed in front of the altar, was then unveiled as the bells of St. Peter’s Basilica rang out.

The choir sang the traditional Christmas carols Silent Night, The First Noel and Adeste Fidelis (O Come, All Ye Faithful), among others. The Mass concluded with the traditional Italian carol Tu Scendi Dalle Stelle, which means “You Come Down From the Stars.”

In his homily, Pope Francis said God wants to tell us the following message: “If you feel consumed by events, if you are devoured by a sense of guilt and inadequacy, if you hunger for justice, I, your God, am with you. I know what you are experiencing, for I experienced it myself in that manger. I know your weaknesses, your failings and your history. I was born in order to tell you that I am, and always will be, close to you.”

The Pope focused on the three places in the second chapter of the Gospel of Luke where it mentions the manger.

Francis explained that by being born in a stable and placed in a manger to sleep, the Son of God showed us that true wealth is found in relationships, not power and money.

“Around the manger there is very little: hay and straw, a few animals, little else. People were warm in the inn, but not here in the coldness of a stable. Yet that is where Jesus was born,” he said. “The manger reminds us that he was surrounded by nothing but love: Mary, Joseph and the shepherds; all poor people, united by affection and amazement, not by wealth and great expectations.”

He said the Church is called to show the same affection toward the poor.

“We are called to be a Church that worships a Jesus who is poor and that serves him in the poor,” he noted, quoting St. Oscar Romero, who said on Jan. 1, 1980: “The Church supports and blesses efforts to change the structures of injustice and sets down but one condition: that social, economic and political change truly benefit the poor.”

He continued, “Certainly, it is not easy to leave the comfortable warmth of worldliness to embrace the stark beauty of the grotto of Bethlehem, but let us remember that it is not truly Christmas without the poor. Without the poor, we can celebrate Christmas, but not the birth of Jesus.”