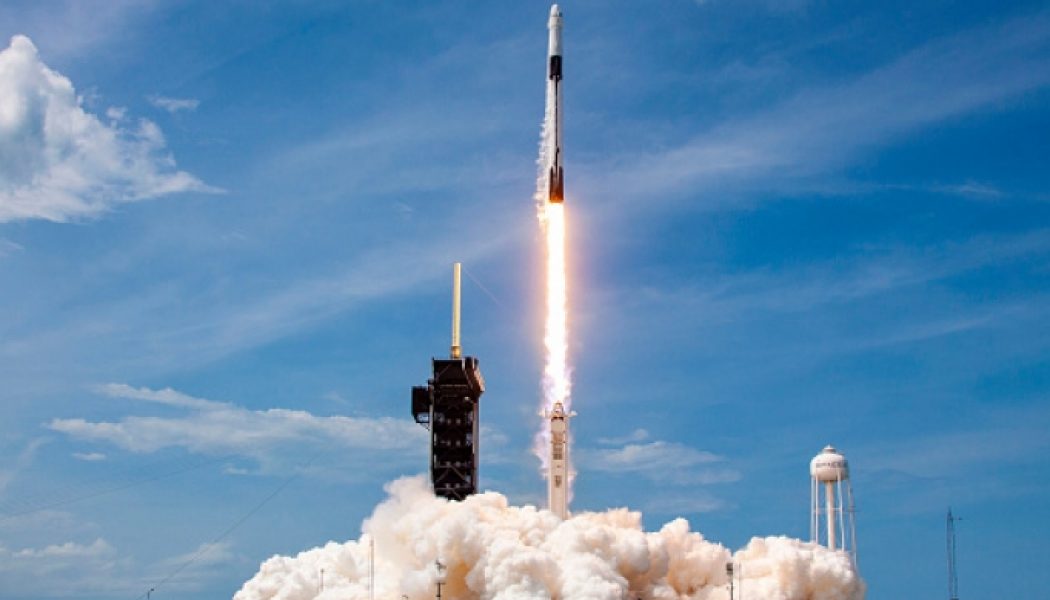 A Falcon 9 rocket carrying the company’s Crew Dragon spacecraft launches on the Demo-2 mission to the International Space Station with NASA astronauts Robert Behnken and Douglas Hurley onboard at Launch Complex 39A May 30 at the Kennedy Space Center, Cape Canaveral, Florida. (SpaceX via Getty Images)

COMMENTARY: Apollo 11 was a much-needed respite amid a time of social and political chaos.

“To boldly go where no man has gone before.” That was precisely where three U.S. astronauts went in July 1969, when, for the first time, a human being touched foot on the moon.

But this “giant leap for mankind” wasn’t just a great technical triumph. It was a much-needed respite amid a time of social and political chaos.

America was already beset by Vietnam and civil-rights struggles. That summer of 1969, things got worse.

The nation was shocked by news of a riot after a confrontation between gay-rights activists and police outside the Stonewall Inn in Greenwich Village on June 28. The incident was a complete shock to the post-World War II generation.

Then came news of the drowning of Mary Jo Kopechne in a fatal vehicle accident, the car being driven by an intoxicated Sen. Ted Kennedy, in Chappaquiddick, Massachusetts, late in the night of July 18-19. Following the assassinations of John and Bobby, here was another Kennedy family tragedy.

The summer also brought news of the hideous Manson Family murders of pregnant actress Sharon Tate and others in a brutal attack the night of Aug. 9-10. A week later was the spectacle of Woodstock, where half a million people gathered at a farm in rural New York in an unprecedented display of rock ’n’ roll, drugs and hedonism.

And still more was stirring beneath gathering storm clouds. The National Convention for Students for a Democratic Society (SDS) opened on June 18, 1969, at the Chicago Coliseum on South Wabash, just down the street from police headquarters, home of the so-called “pigs” with whom the radical Weathermen — soon to become the fugitive Weather Underground — prepared for battle. A mighty clash between student radicals and police ultimately erupted in October in what became known as the Days of Rage.

An organized riot commenced on Oct. 5, 1969, when some “flower children” dynamited the statue commemorating the Chicago police killed in the 1886 Haymarket Riot. As far as the protesters were concerned, these men were not Chicago’s finest, not veterans of the police force and (in many cases) of World War II, but jackbooted swine. All cops were bad. Violent clashes with more than 1,000 policemen ensued. Americans watched on their televisions in horror.

As if all of this weren’t bad enough, not only was there social and political chaos in 1969, but even a pandemic afoot. A malicious virus hit the world and America, emanating from Asia. Known as the Hong Kong Flu, technically called “H3N2,” it killed upwards of 4 million people worldwide between 1968 and 1970, including more than 100,000 in America — a death toll chillingly similar to COVID-19. In fact, like COVID-19, it arrived in America full force around March. It was brutal on the respiratory system, causing excessive coughing and wreaking havoc on the lungs.

And so, amid the turmoil and gloom, the moon landing on July 20 by the Apollo 11 crew of Neil Armstrong, Buzz Aldrin and Michael Collins was a wonderful respite. The whole of humanity watched. Appreciation was expressed from the Republican White House to the Vatican.

As to the latter, Pope Paul VI was jubilant about this triumph, this “tribute to the capacity of modern man to reach beyond himself, to attain perfection of achievement made possible by God-given talent.” He hailed the Apollo 11 crew:

“Honor, greetings and blessings to you, conquerors of the moon, pale lamp of our nights and our dreams! Today we celebrate a sublime victory!” He commended how their “bravery” had allowed humanity to take “another step towards knowing more of the universe.”

All of this seems a very appropriate and very ironic context, given current events. Once again, America has boldly gone forth with another historic space mission.

In Florida on Saturday, SpaceX lifted a rocket into orbit, heralding a new era, the first launch of U.S. astronauts since the retirement of the space-shuttle programs in 2011. As The New York Times aptly put it, the United States “opened a new era of human space travel.” Here was a private company sending astronauts into orbit, almost a decade after the federal government shelved the space-shuttle program.

Appropriately, the two astronauts aboard a Falcon 9 rocket shot off from the same Florida launchpad that had served the Apollo missions. This time, however, resurrecting the program is not the broke federal government, but a private company called SpaceX, founded in 2002 by billionaire Elon Musk. It’s an impressive partnership between NASA and a private company, breaking new ground in many ways.

President Donald Trump and Vice President Mike Pence both watched, with Trump rightly calling the feat “an inspiration for our country” and an “envy of the world.” He noted that the launch “makes clear the commercial space industry is the future.” Sights are literally now set not on the moon but Mars.

Of course, this launch in 2020, like that in 1969, likewise occurs during a time of social and political chaos and pandemic, with well over a hundred cities smoldering in angry protest over the police killing of George Floyd in Minnesota — with demonstrators masking up as COVID-19 continues its morbid march. The disease has robbed the lives of more than 100,000 people in the U.S. alone, with millions of cases rising worldwide.

With such bad news, the SpaceX launch should have been a welcomed reprieve. And yet, unlike July 1969, this one seems to have elicited comparatively little coverage. Sure, this launch wasn’t as historic as July 1969. No question. Apollo 11 is hard to surpass. What’s striking, however, is how little attention SpaceX seemed to receive. You could’ve easily missed it. Many news-roundup sites barely mentioned it.

The launch this week is likewise historic, particularly because of the involvement of the private sector and the horizons that can literally open up. Nonetheless, those hopes and dreams were overshadowed by the protests over the tragic Floyd killing and by COVID-19. That’s too bad.

This launch deserved more. This could have and should have been a moment of unity during a time of crisis. The White House tried to make it a moment of national unity, but the press didn’t seem eager to go along. Today, it seems, all news is political news, or bad news. Well, here was some good news for a change.

This launch says something promising about human achievement amid trial, about our humanity rising to the challenge of technological excellence, despite our sinfulness. And yet, have we paused to recognize that, to appreciate it? I think not. And that, too, seems a sign of our present darkness.

His books include A Pope and a President, The Divine Plan and The Politically Incorrect Guide to Communism.