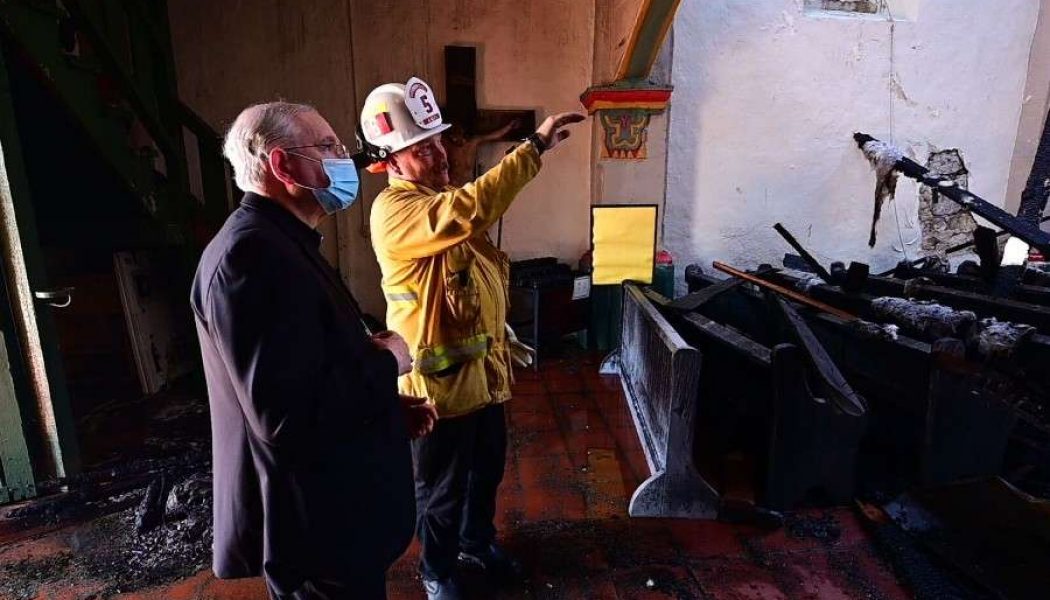 The fire began early Saturday morning around 4 a.m. and destroyed the roof and interior of the 249-year-old structure. Local firefighters said they responded to an initial alarm at 4:24. By the time they arrived, smoke and flames were visible from outside the church – which is a California Historical Landmark.

Our beloved #SanGabrielMission, founded in 1771, devastated by fire before dawn. St. Junípero Serra, pray for this land that you helped to found. pic.twitter.com/aX0X4qCvJ7

“The roof of the mission is completely gone and the interior up to the altar is completely destroyed,” Negrete said, noting that it was not yet possible to establish the cause of the fire because of concerns over the building’s structural integrity.

“We’re going to have building engineers come in and see if we can shore up some walls to make it as safe as possible for the investigators to go in and start investigating this fire,” he said, according to the Times.

Adrian Marquez Alarcon, spokeswoman for the Archdiocese of Los Angeles, said that because of renovations underway at the church ahead of its 250thanniversary, historic paintings and artifacts had been removed and were not in the building at the time of the fire.

Los Angeles Archbishop Jose Gomez visited the church Saturday morning, saying on Facebook that “[he] woke up before dawn this morning to news that our beloved San Gabriel Mission, founded by St. Junípero Serra in 1771, was burning.”

“Thank God no one is hurt,” Gomez said. “I’m here to pray with the people. The roof is destroyed and there is much damage in the old church. St. Junípero, pray for this city, this state, and this country that you helped to found.”

The San Gabriel mission was the fourth mission founded by St. Junípero Serra, a Franciscan priest who founded a trail of missions across California. Serra helped to convert thousands of native Californians to Christianity, and taught them new agricultural technologies.

Many of Serra’s missions form the cores of what are today the state’s biggest cities— such as San Diego, San Francisco, and Los Angeles.

An advocate for native people and a champion of human rights, Serra was often at odds with Spanish authorities over the treatment of native people, from whom there was an outpouring of grief at his death in 1784.

Serra was canonized by Pope Francis during a visit to the United States in 2015.

“Junípero sought to defend the dignity of the native community, to protect it from those who had mistreated and abused it,” the pope said in his homily at the Mass of canonization.

Despite Serra’s record defending indigenous peoples, statues of the saint have become focal points for protests and demonstrations across California in recent weeks, with images of the saint being torn down or vandalized in protest of California’s colonial past.

Rioters pulled down a statue of St. Serra in the state capital of Sacramento on July 4, during which one man burned the face of the statue with an ignited spray can, before a crowd pulled the statue from its base and struck it with a sledgehammer and other objects, dancing and jumping upon it.

The July 11 fire came at nearly the same time a Florida man set fire to a Catholic parish as parishioners prepared for morning Mass.