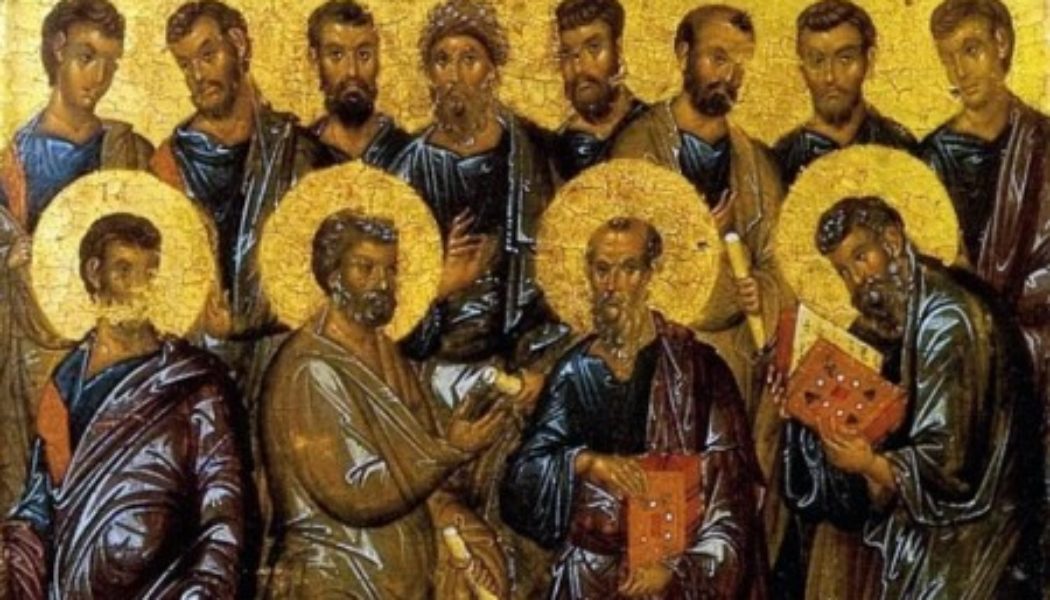 There was a serious religious controversy in the very early Church. The Acts of the Apostles records this story which contains important lessons for you and me and Christ’s one, holy, catholic, and apostolic Church in every age. In the first century A.D., some Jewish Christians came down to Antioch and were telling the Christians there: “Unless you are circumcised according to the Mosaic practice, you cannot be saved.” Many of the Christians in Antioch were Gentile converts. As Gentiles they had not followed the many Jewish religious laws, including circumcision. Now they were being told they had no share in Jesus Christ’s New Covenant unless they kept the entire Mosaic Covenant.

This was a crucial matter: either these Gentiles were not yet experiencing Christ’s salvation, or else the Law of Moses was being needlessly placed as a barrier between Gentiles and Jesus Christ. St. Paul and St. Barnabas strenuously opposed this alternate interpretation of the Gospel which was disturbing and dividing their community, but how could this important issue be decisively and infallibly settled? Everyone forming their own interpretations obviously would not resolve it. How could the Christian community be sure of the truth?

The Acts of the Apostles details how “it was decided that Paul, Barnabas, and some of the others should go up to Jerusalem to the apostles and presbyters about this question.” A Church council was held in Jerusalem and after they had discussed and discerned the matter, “the apostles and presbyters, in agreement with the whole church, decided to choose (a pair of) representatives and to send them to Antioch with Paul and Barnabas. (They selected) Judas, who was called Barsabbas, and Silas, (two) leaders among the brethren.”

And they did not send Barsabbas and Silas empty-handed. The pair carried a letter from the council, which read in part: “It is the decision of the Holy Spirit and of us not to place on you any burden beyond these necessities.” It then listed a handful of culturally offensive and/or sinful acts to abstain from before concluding, “If you keep free of these, you will be doing what is right. Farewell.” In other words, the Gentile Christians would not be required to follow the full Mosaic Law.

Note as well how they do not send this letter by itself, but along with Barsabbas and Silas. This is partly to attest to the genuineness of the message—it’s not something Paul and Barnabas simply made up themselves. The accompanying witnesses are also sent to clarify any ambiguities and answer what remaining questions the Christians at Antioch might have. For instance, the Council of Jerusalem’s short letter bids the Christians to abstain from “porniea,” which various Christian Bibles translate as “sexual immorality,” or “fornication,” or “unlawful marriage.” But what was the precise meaning they intended here? One of these things or all of them together? Barsabbas and Silas could answer. We see that even a text inspired by the Holy Spirit (as this one was) can require an authoritative interpreter to be properly understood.

When the delegation from Jerusalem arrived at Antioch, the letter was read to the Christian community and the people were delighted. Barsabbas and Silas preached to them, encouraging them, and remained with them for some time. The controversy was resolved, and the community’s unity and peace of mind were restored; for the Bride of Christ, Mother Church, had spoken, removing all doubt about what Jesus wanted them to do.

This, of course, would not be the last controversy in Church history. Every century since has seen its heresies, and every error gains some followers because it is so easy to be mistaken. Clever minds and willful hearts in a fallen world can go down many false paths, and when lambs or sheep choose their own ways to go they scatter from Christ’s flock. Thankfully, God has given us his Holy Word in Sacred Scripture to help us to know him and his saving, loving will for our lives.

However, the Scriptures do not automatically interpret themselves. Even self-proclaimed “Bible Only” Christian denominations disagree with one another over important questions. The Protestant principle of Sola Scriptura (that “Scripture Alone” is the sole authority for Christian faith and life) is a self-refuting concept because the Bible does not teach it. How can someone even be sure which books are supposed to be in our Bible without there being an infallible Church to recognize them and place them into the canon of biblical books? Without a Spirit-guarded, infallibly-teaching Magisterium neither the Christians at Antioch nor Christians today could be sure about what we are to believe.

The Church of Jesus Christ is not meant to be many separate denomination, but one. Christ’s Church is not meant to bring salvation only to some, but to all. And the one, holy, catholic, and apostolic Church of Christ shares a continuity in her structure and in her teaching throughout the centuries from St. Peter and the apostles to Pope Francis and the bishops today.

In 1926, when G.K. Chesterton wrote his essay “Why I am a Catholic,” he presented a number of reasons, but the answer of his which has always stood out to me is this one: “(I am a Catholic because it) is the only thing that frees a man from the degrading slavery of being a child of his age.” Some secular people imagine our present generation is the first one to get everything right, but in one hundred years another secular generation will mock and cringe at this one while embracing another set of fashionable errors of their own. However, in one hundred years the Catholic Church will remain, built solidly upon rock, and united to the Person and teachings of Jesus Christ our Lord.

Here is a final reflection from the controversy at Antioch. The teaching of Paul and Barnabas was right, and Barsabbas and Silas carried authority from the apostles. They were important witnesses to the Faith. But their message would have been undermined in the minds of others if St. Paul, St. Barnabas, St. Barsabbas, or St. Silas had not lived as saints. Our fellow Christians, even popes or bishops, may disappoint or cause scandal by their poor personal example, harming souls. But let us, you and I, rededicate ourselves to Christ, loving him and serving him, remaining close to him in the Sacraments, allowing ourselves to be more fully converted to him, so that others may know, love, and faithfully follow Jesus alongside us in his Holy Catholic Church.

This entry was posted on May 22, 2022 at 2:24 pm and is filed under Catholic Church, Christian Perfection, Culture, Early Church, G.K. Chesterton, Homily, Salvation History, St. Paul, Sunday Homilies. You can follow any responses to this entry through the RSS 2.0 feed. You can leave a response, or trackback from your own site.