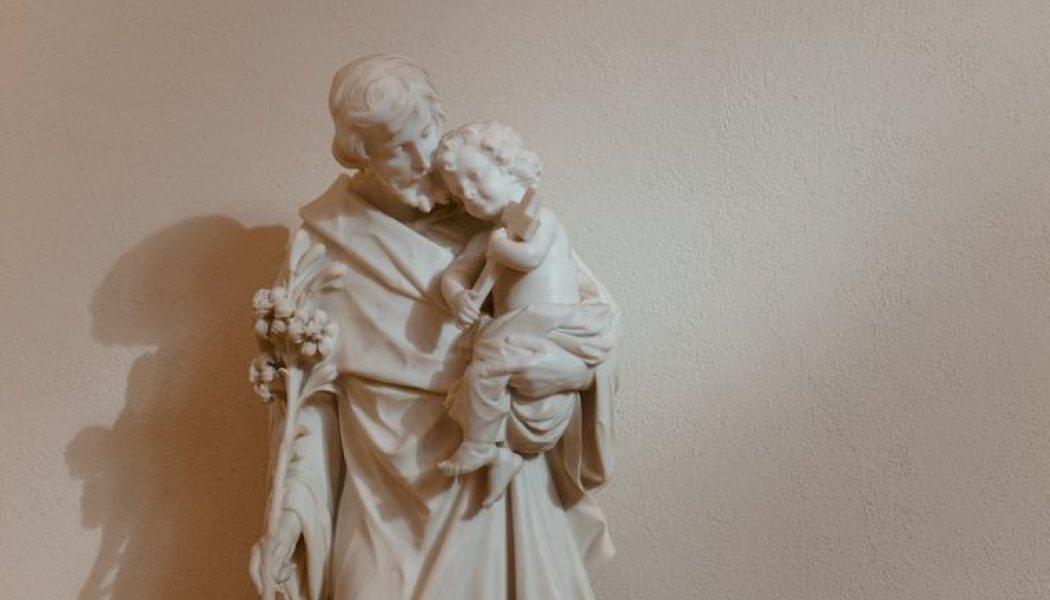 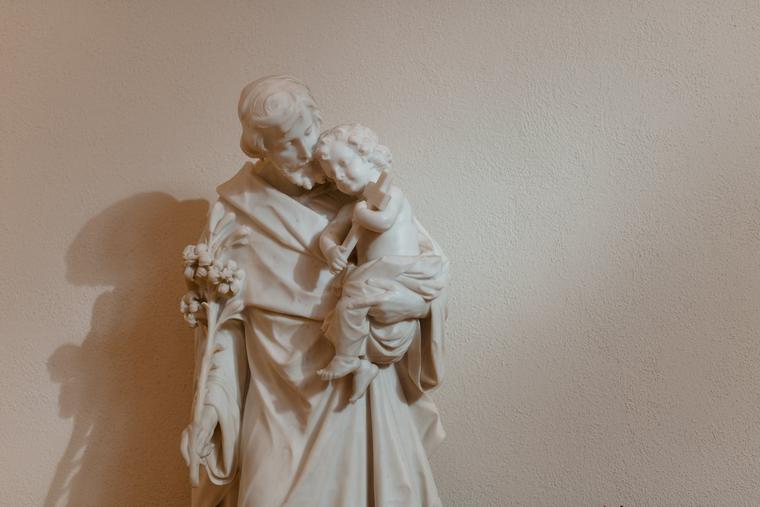 Dec. 8, 2020, marks the 150th anniversary of Blessed Pius IX proclaiming St. Joseph as “Patron of the Universal Church.” The timing was providential, for several reasons. The date also celebrated the 16th anniversary of Pius IX’s proclamation of the dogma of the Immaculate Conception.

With the declaration on that Dec. 8, Pope Pius IX called the day “sacred to the Immaculate Virgin Mother of God and Spouse of the Most Chaste Joseph.”

He makes strong connections between today’s society and the situation during the time of the proclamation. “The time when Pius IX lived was facing a lot of darkness, and the Church was facing a lot of persecution,” Father Spencer said. As the individual states in Italy were unifying against the Church, “the Church was under extreme, persecution, especially at the heart of the Church in Rome. Pius IX saw this clearly along with bishops all over the world.”

“Moving forward to the 21st century, we look at how the Church is being persecuted, troubled by sin and evil, especially crimes against life,” Father Spencer said. “And who do we turn to? We turn to St. Joseph, because Pius IX and the whole Church was undergoing great darkness and entrusted themselves to the providence of God and St. Joseph; so we need to turn to St. Joseph, because he remains our patron in these dark times.”

Indeed, in Quemadmodum Deus, Pope Pius IX emphasized, “[N]ow that in this most sorrowful time the Church herself is beset by enemies on every side and oppressed by heavy calamities, so that impious men imagine that the gates of hell are at length prevailing against her,” the bishops of the world, along with the faithful, asked him to “constitute St. Joseph Patron of the Catholic Church.”

Pope Pius IX recognized that because of the “sublime dignity which God conferred on His most faithful Servant, the Church has always most highly honored and lauded the Most Blessed Joseph next after his spouse, the Virgin Mother of God, and has implored his intercession in all her great necessities.”

Father Donald Calloway, vicar provincial and vocation director for the Marian Fathers of the Immaculate Conception and author of Consecration to St. Joseph: The Wonders of Our Spiritual Father, points out the need to “go to Joseph” today. “A lot of the crisis and the real craziness going on in the world today includes a lot of confusion about the family, marriage, gender identity, confusion about what a man and a woman are, and about fatherhood, especially what the roll of a father is, even 150 years later, after St. Joseph was named patron of the universal Church,” he said.

Roots of the Title

God prefigured his choice of Joseph in the Old Testament when, proclaimed Pius IX, “He chose another Joseph, of whom the first had been the type, and He made him Lord and Ruler of His household and possessions, the Guardian of His greatest treasures.”

Father Spencer explained the Pope’s beautiful logic, explaining the story in the Book of Genesis of Jacob’s son Joseph being sold into slavery in Egypt.

“By God’s providence, by the way he interprets dreams, he gains favor with Pharaoh and was put in charge of Pharaoh’s reign in Egypt and also in charge of the food distribution. He anticipated a great famine, started saving grain and would provide food for the whole of Pharaoh’s kingdom. So St. Joseph is able to provide Jesus the Bread of Life to all for God’s people. These are the concepts Pius IX is drawing out effectively. Just as Joseph of Egypt was entrusted with the whole of Egypt, Pharaoh’s kingdom, so Joseph of Nazareth is entrusted with and given care of Jesus and Mary, God’s greatest treasures.”

Sean Martin, director of evangelization, catechesis and family life in the Diocese of Gary, Indiana, finds that to have St. Joseph as patron of the Church “is very similar in nature to him being the adopted father of Jesus and what he did for Jesus and Mary,” he said. What St. Joseph did for them, “I firmly believe he does for the universal Church.”

Martin gave one example, referring to the Annunciation. “St. Joseph certainly protected Mary and preserved her from any sort of pubic shame. He preserved her virginity, her purity of heart, and was certainly a protector that way. St. Joseph was to protect his wife. Pius IX declared him the patron of the Church on the feast of the Immaculate Conception to make that link.”

In the proclamation, the Pope also raised St. Joseph’s feast of March 19 “to comply with the desires of the Prelates, and to commit to the most powerful patronage of his festival, occurring on the 19th of March, to be celebrated as a double of the first class,” which was the highest-ranking among feast days on the pre-conciliar calendar, now known as a “solemnity.”

He also links the idea to Pius IX’s time of turmoil in society and in the Church because of war and the new “movements of socialism, communism, materialism, all sort of -isms. St. Joseph was certainly seen as a protector of the truths of the faith and fighter against the heresies that would damage our faith in any way. And St. Joseph certainly upheld the dignity of Mary and Jesus and shows us how to uphold the dignity of human life, from the moment of conception to the moment of death. St. Joseph certainly loves and respects us.”

Patron of the Domestic Church

Catholic families can also take St. Joseph as their patron.

Father Spencer said, “Just as Joseph is a patron of the universal Church, Joseph is patron of the domestic church, as well. Just as Joseph provided for Mary and Jesus and provides for the Church as a whole, Joseph can be trusted to provide for the needs of the domestic church, [as] fathers, mothers, children are going through dark times now and facing evil which we never encountered and faced before.”

Father Spencer listed some trials St. Joseph experienced, including the threats of Herod and searching for Jesus in the Temple. “Joseph went through all these difficult experiences and yet trusted in God’s plan for him,” he explained. “That’s why he’s such a perfect model for fathers and mothers today” in how they interact with their children. “Fathers and mothers have to learn how to protect them from the evils of today, and they learn that best through the example of Joseph and Mary because they were the perfect custodians of Jesus.”

In 2013, when St. Joseph’s name was added to all the canons of the Mass through a decree by the Congregation for Divine Worship and the Discipline of the Sacraments, Bishop James Conley of the Diocese of Lincoln, Nebraska, wrote about this other “aspect of St. Joseph’s ‘spiritual fatherhood’ which deserves to be explored and appreciated in greater depth: namely, his patronage over what is called the ‘domestic church.’ … In an unofficial but very real way, Joseph is the ‘patron saint of the domestic church,’ just as he is of the Universal Church.”

Bishop Conley explained, “This description of St. Joseph is also an image of true Catholic fatherhood. …” Like “St. Joseph, men must teach their children to pray and observe the precepts of the Faith.”

He continued to explain how “each domestic church enriches and builds up the Universal Church. These two realities are ultimately inseparable — which is why St. Joseph is the glorious patron of them both.”

He also emphasized, “Joseph’s patronage over the domestic church is especially important in our time. To renew the Church, and re-evangelize society, we must strengthen the everyday life of faith within Catholic families.”

Father Calloway explained that the word “patron” comes from the Latin word pater, which means “father.”

In this title, “St. Joseph is basically saying we can look to him to find the norm, the order out of our chaos and confusion and find the way to peace because he is a good, loving father who provides a place of peace and tranquility and stability that is lacking today.”

This includes the Church’s “priests and bishops in the sense they can look to St. Joseph and see that sacrificial man, the pure man entrusted to their care. We know we  have a lot of problems in the clergy, but St. Joseph is also a great hope and model for the clergy.” This year in the United States, 10 bishops have declared a “Year of St. Joseph” for their dioceses.

Father Calloway called attention to the titles included in the Litany of St. Joseph, including “the Glory of Domestic Life” and “Pillar of Families.”

St. Joseph is also “Terror of Demons,” a powerful title showing that “St. Joseph was protecting his wife and son from the evil one,” Father Calloway explained. “That’s what needs to happen today, with lots of threats and attacks coming at the family from different sources. We need to be protected, and St. Joseph protects his loved ones.”

Recently, Martin said he has been encouraged by an increase of devotion to St. Joseph, especially by Catholic men in the United States. “His intercession is super important in the domestic church and we shouldn’t take it lightly,” he said. “And we should continually have devotion to him.”

He added, “As a part of the universal Church, one can run to St. Joseph and ask his intercession. He is before the throne of God. His will is intimately tied with God’s will, the Triune God. His prayers are efficacious. His intercession is very powerful.”