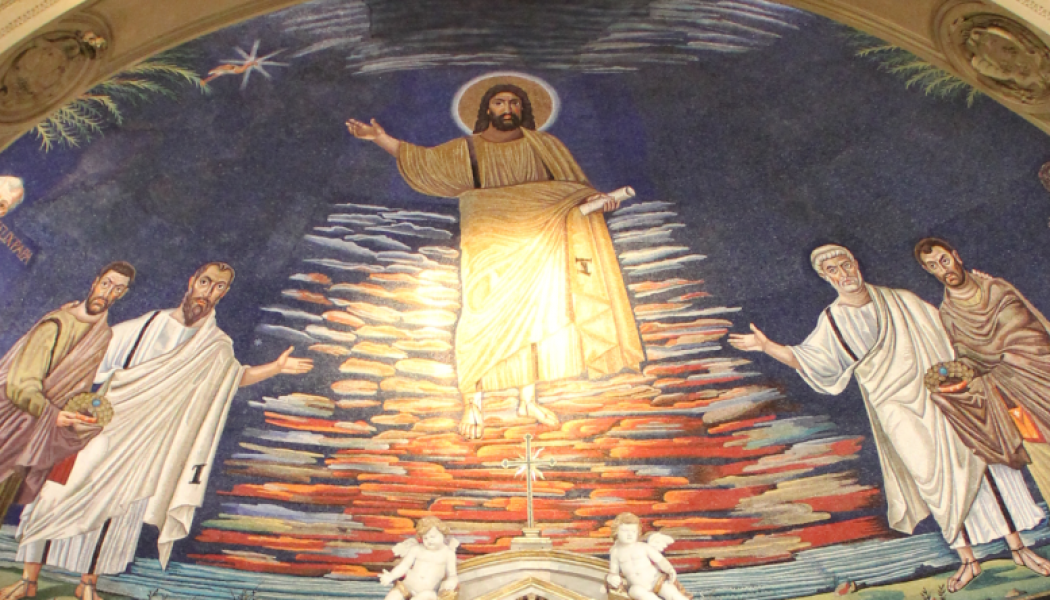 On 26 September each year, the Roman Church celebrates the lives and sacrifices of Sts. Cosmas and Damian.

Most Catholics certainly don’t know the story about these two men, although Catholics around the world evey day ask for their intercession in the Litany of the Saints in the First Eucharistic Prayer (“…we honor Linus, Cletus, Clement, Sixtus, Cornelius, Cyprian, Lawrence, Chrysogonus, John and Paul, Cosmas and Damian and all the saints.”).

So, who were they?

Sts. Cosmas and Damian were twins born in Arabia in the second half of the A.D. 200s. These men studied in medicine and eventually moved to the bustling seaport city of Aegea in the Roman Province of Cilicia in South-Central Asia Minor (the modern day city of Yumurtalik, Turkey). The Saints are known in Greek as the “anargryoi” meaning “silverless” because they refused to take payment for their services to the poor. The twins wrought many healing miracles through the Power of Christ in their city.

Eventually, under the persecution of the Roman Emperor Diocletian, Sts. Cosmas and Damian were reported to the authorities for their Catholic Faith. The local prefect, Lysias, ordered numerous torments of the two men. First, they were chained together and thrown into the sea, but they escaped. The brothers were then thrown in prison and a fire was prepared to throw them in. Through the Saints’ prayers, the fire failed to stay lit. Lysias then ordered the men be crucified. After they were crucified, stones and arrows were launched at the Saints which promptly changed course and hit those attacking the Saints. When these tortures did not kill the brothers, they were finally beheaded with the sword. It is said the twins’ brothers Anthimus, Leontius, and Euprepius died as martyrs with them. The execution took place 27 September (the 27th was their Feast Day in the pre-1970 Roman Calendar, now it is 26 September), sometime between the years 287 and 303. According to the Roman Martyrology, Sts. Cosmas and Damian’s bodies were then “buried not far from the city of Aegea.”

According to Father Alban Butler and his Lives of the Saints, the bodies of Sts. Cosmas and Damian were carried into Syria, and buried at the city of Cyrrhus (about 70 miles east of Aegea…I have not come across the reason as to why this city was chosen, but I surmise it could have been the Saints’ hometown). A Church Father named Theodoret (lived 393 – 457), who was bishop of that city in the 5th century (he mentions in his Epistle #113 that he oversaw 800 churches! (ref. newadvent.org)), mentions that their relics were deposited in a church there, which bore their names. The Byzantine Emperor Justinian I (lived 527-565) sumptuously restored the city of Cyrrhus in their honor. having been cured of a dangerous illness by the intercession of Cosmas and Damian. In 637, the city of Cyrrhus would later fall to the Arabs during the First Islamic Conquest.

Before the fall of Cyrrhus, however, some or all of the Saints’ relics were taken to Rome. According to Butler, “[Veneration] of SS Cosmas and Damian first reached Rome during the pontificate of St Symmachus (498-514), who introduced it into an oratory near the basilica of Santa Maria Maggiore. At Rome Pope Felix IV (526-530) erected a church in their honour, the mosaics of which are still among the most valuable art remains of the city.”

According to a history of the Basilica of Sts. Cosmas and Damian in Rome, it was Pope St. Gregory the Great (590 – 604) who in 592 had the relics of the holy martyrs Cosmas and Damian and those of their brothers Antimus, Leontius, and Eurprepius brought from Asia Minor and placed under the altar of the crypt of the Saints’ Roman Basilica where they remain today.

The history of the basilica also states there were several reasons why the Pope dedicated the Basilica to the holy physician-martyrs. The basilica was formerly the Library, or “Bibliotheca Pacis.” It was the lecture hall for Claudius Galen, the prince of Roman medicine and physician at the courts of Marcus Aurelius and later of Commodus (180 – 193). Also, for centuries, the offices of most physicians of Rome were located in the area. Furthermore, the location was only a short distance from the pagan Temple of the twins Castor and Pollux. The holy martyrs, Cosmas and Damian, twins and physicians, thus provided an appropriate substitute for the pagan twins and also served to “convert” the science of medicine. The Pope opted for this fortunate substitution, which was also desired by the many immigrants coming from the Middle East where the holy brothers Cosmas and Damian were venerated by Christians as miracle workers in restoring health.

My family and I were stationed at Incirlik Air Base, Turkey from 2010 to 2012. During my time there, I did a lot of research about the ancient Christian history of my new home. It just so happened that the town of Aegea where Sts. Cosmas and Damian lived and were martyred ended up being only a 1 hour drive from our house! The town of Aegea (now known in Turkish as “Yumurtalik”) is a small, but beautiful beach town rich in history.

There are small glimpses of the storied past of this ancient town; civilizations have settled here since the Hittites and the Ancient Greeks lived.

According to an article about the history of Aegea/Yumurtalik by historians Friedrich Hild and Hansgerd Hellenkemper, Aegea was, in ancient times, a major center of the cult of the Greek/Roman god Asclepius who was the god of healing. A temple dedicated to the god once stood in the city, which was destroyed and replaced with a church by the first Christian Roman Emperor, Constantine. Very awesome that the Lord should combat this pagan local cult of a healing god by bringing forth in Aegea two great Saints known for their healing miracles!

After going on pilgrimages many time to this small Turkish town, my family and I had the opportunity to visit the holy saints in person at their church in Rome!

Through my research about the Saints, I discovered their tomb was actually not in the upper church, but in the crypt of the basilica which was not usually open to the public. We spoke to one of the attendants at the basilica, who then took us to speak to the prior of the religious order responsible for the basilica. We lucked out because the priest we spoke to happened to be from Chicago, Illinois, USA! He happily gave the attendant the key to the crypt and we were able to visit our holy friends (and fellow residents of Turkey/Asia Minor) in person!

After completing further research concerning the hometown of these Saints, I found that 11 more Saints were martyred by Roman authorities there at other times: St. Thelalaeus, St. Julian, St. Asterius, St. Neon, St. Claudius, St. Domnina, St. Theonilla, St. Zenobia, St. Zenobius, St. Alexander, and a different St. Asterius. What a holy place for our Church!

Although in the year 1316, it was documented that Sts. Cosmas and Damian’s hometown Aegea had 10 churches to minister to the Catholic faithful, below is literally all that remains of the Christian faith in this holy town, sprinkled with the blood of 13 martyrs:

Ironically, I doubt any of the 5,000 Muslims currently living in Yumurtalik/Aegea know of the significance and Christian history of their town…that two former residents of their town are mentioned by name in Masses around the world everyday!

Like in Aegea, even the Emperor Justinian’s great basilica in Cyrrhus which once held the tomb of the Saints…

…is tragically now a ruin in a field of debris…

…like this picture of another church in the city:

Understanding and knowing the history of the Church in ancient Asia Minor/Turkey should remind us all of the impermanence of worldly things. Structures come and go, cultures come and go. When I look at pictures of the ruined church above, I wonder: What were its parishioners like? Who was their priest? Did they have parish picnics? How many weddings took place here? How many celebrations of the Holy Eucharist happened here? What was the last Mass said here like, before the church was abandoned and destroyed? Will my parish church look like this in 1500 years?

And yet, despite the ravages of time and the ebbs and flows of civilizations, the Catholic Church remains…Christ remains with us.

May Sts. Cosmas and Damian keep us in their prayers and bestow God’s healing graces to those sick among us on their feast day, may they pray for the souls of the Christians in the past, and may they pray for and gain God’s protection for the Catholics and other Christians living in Turkey and other areas of the Middle East! Amen.