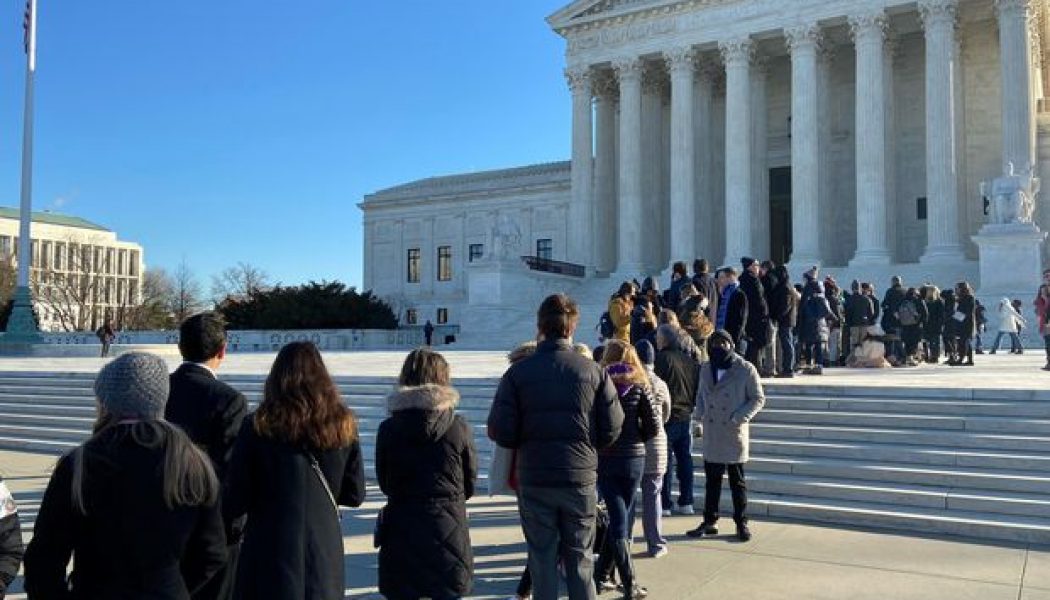 The program at issue was relatively small; it provided up to a $150 tax credit to residents who contributed a like amount to organizations providing scholarships to private schools, whether secular or religious. The Montana Supreme Court struck down the entire program, finding it violated the state constitution’s ban on public support for sectarian schools.

Parents seeking scholarships to send their children to Stillwater Christian School in Kalispell, Mont., argue that in enforcing the state-constitution provision, the Montana high court violated their rights under the federal Constitution to religious exercise and equal protection of the laws.

The Supreme Court has been moving away from a strict separation of church and state through opinions that extend religious exemptions from general laws as well as other decisions forbidding government from denying some benefits to religious organizations. Conservative groups backing the Montana suit hope it will pave the way for broader taxpayer subsidy of religious schools through vouchers and other programs.

That prospect concerned Justice Stephen Breyer, who often has sought a middle path in cases involving church and state.

Many states have experimented with charter schools, which are publicly funded but privately operated, as alternatives to the traditional public-school system, he observed.

“Now, they don’t give money to Catholic schools,” he said. “If we decide you’re right, does that all change?”

“You can’t deny a generally available public benefit to an entity that’s otherwise qualified based solely on its religious character,” said Deputy Solicitor General Jeffrey Wall, who argued the Trump administration’s position in favor of the Stillwater Christian parents.

In a 2017 case, Trinity Lutheran Church v. Comer, a 7-2 Supreme Court held that a Missouri program providing grants to resurface playgrounds must be opened to religious schools.

Justice Samuel Alito saw the Montana case as the next logical step.

The state need not “fund private education at all, but if they choose to provide scholarships that are available to students who attend private schools, they can’t discriminate against parents who want to send their children to schools that are affiliated in some way with a church,” said Justice Alito. “That’s the simple argument. And it’s hard to see that that’s much different from Trinity Lutheran.”

At the time, Protestant prayers and readings from the King James Bible were common in public schools. Bans on state aid to sectarian schools—known as Blaine amendments, for Rep. James Blaine (R., Maine), who had unsuccessfully proposed such a provision for the federal Constitution—served to prevent taxpayer support for Catholic schools. Montana has had a ban on public support of religious schools and institutions as far back as its 1884 territorial constitution.

Adam Unikowsky, arguing for the state, said the current provision was untainted by that history, arising instead from Montana’s 1972 constitutional convention. “There’s no bigotry whatsoever in evidence from the actual convention at which this is enacted,” he said. “It’s simply separating the church from the state without, again, preventing anyone from going to any of these schools.”

Justice Elena Kagan, had voted to strike down the Missouri program in the Trinity Lutheran case. But she said there were greater justifications for excluding religious education from state subsidies than playgrounds that happen to belong to church schools.

Justice Ruth Bader Ginsburg asked how the Montana court’s decision discriminated against religion, since it cancelled the scholarship program for all private schools.

“Under the Montana judgment, these parents are treated no differently than parents of children who are going to secular private schools,” she said. “So where is the harm?”

Chief Justice John Roberts asked how the Montana court’s ruling differed from decisions some Southern communities took in the 1950s and ‘60s to shut down parks, pools and even schools rather than desegregate them.

“I don’t think that race and religion are identical for all constitutional purposes,” Mr. Unikowsky said. “It’s at least permissible for a state to say, for principled reasons deeply rooted in national tradition dating back to Madison, we have a preference to not fund religious activities, not prohibit it but not fund it,” he said.

A decision in the case, Espinoza v. Montana Department of Revenue, is expected before July.

Write to Jess Bravin at jess.bravin@wsj.com