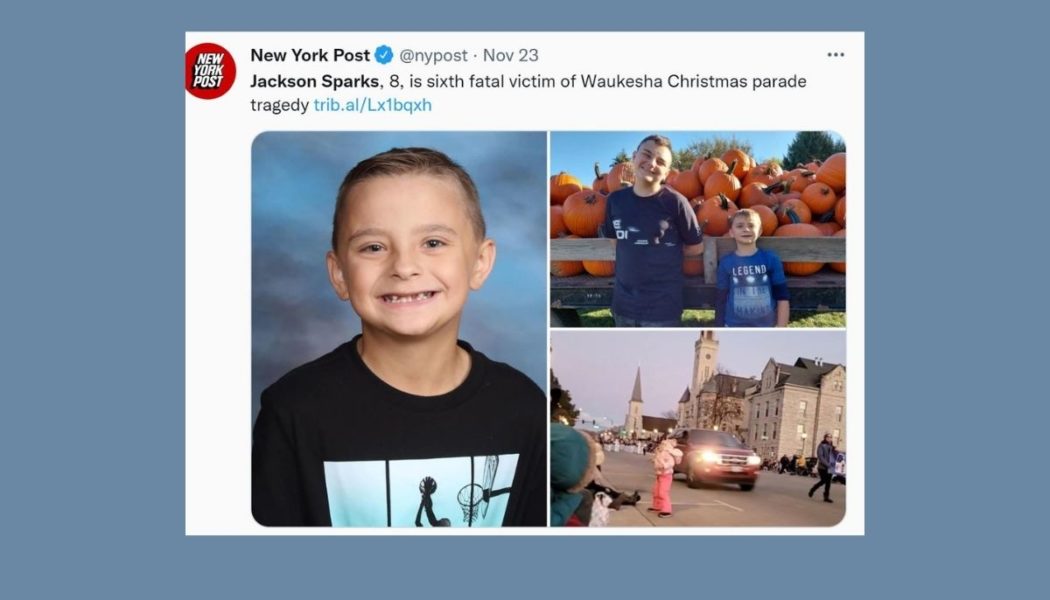 And on Tuesday, 8-year-old Jackson Sparks succumbed to his injuries and became the youngest fatality of the Wisconsin attack.

Tributes have continued to pour in in the wake of the SUV attack at a Christmas parade in Waukesha, Wisonsin, as the death toll continues to rise, with the wife of a Catholic radio host among the victims.

On Tuesday, 8-year-old Jackson Sparks succumbed to his injuries and became the youngest fatality of the attack. The death toll now stands at six, with at least 50 injured. Sparks was marching in the parade with his baseball team, the Waukesha Blazers.

Sparks was remembered by his baseball organization’s president, Jeff Rogers, as someone who was “a sweet, talented boy who was a joy to coach.”

“He was an awesome utility player and played on the Blazers Wolfpack team. Jackson was sweet and tender-hearted with a contagious smile. He was the little guy on the team that everyone supported. You couldn’t help but love him,” Rogers said in a Facebook post.

The attack on Nov. 21 involved a red SUV that barreled through barricades and into a crowd marching down the main street of Waukesha just before 4:40pm on Nov. 21. The driver, Darrell Brooks Jr., was arrested.

Videos posted on social media showed the vehicle racing down the parade route, with police in pursuit, past horrified onlookers moments before marchers were struck.

A priest injured in the attack was released from the hospital on Monday, according to the Catholic Community of Waukesha.

Father Patrick Heppe, a parish priest of the Catholic Community of Waukesha, a cluster of the four Catholic churches in the Milwaukee suburb, is recovering well.

“At the prayer service last night, Father Matthew informed everyone that Father Pat is at home and recovering from a concussion after spending Sunday night in the hospital,” said a Nov. 23 statement from Monica Cardenas, the parish’s director of stewardship and communication.

“At this time, he is resting, maintaining his sense of humor, and his prognosis is good. He appreciates your prayers and is thinking of and praying for our community,” she said.

A message sent to Archbishop Jerome Listecki of Milwaukee said that the Pope was “asking the Lord to bestow upon everyone the spiritual strength which triumphs over violence and overcomes evil with good.”

“The Holy Father asks you kindly to convey the assurance of his spiritual closeness to all affected by the tragic incident that recently took place in Waukesha,” said the telegram, released on Nov. 23 and sent on the Pope’s behalf by Vatican Secretary of State Cardinal Pietro Parolin.

“He commends the souls of those who died to Almighty God’s loving mercy and implores the divine gifts of healing and consolation upon the injured and bereaved.”

Four of the dead were affiliated with a popular local dancing troupe, the “Milwaukee Dancing Grannies.” The “Dancing Grannies” perform at parades throughout Wisconsin and Minnesota. Two dancers, their choreographer, and the husband of a dancer were killed, and others were injured.

Tamara Durand, 52, was making her debut performance as a “Dancing Granny.” Durand’s husband, Dave, is a Catholic author and the host of The Dave Durand Show on Relevant Radio. According to local media reports, Tamara was actively involved in her parish and hoped to one day travel to the Vatican.

“Please pray for the repose of the soul of Tamara Durand, wife of Dave Durand, part of our Relevant Radio family,” Cale Clark, host of The Cale Clark Show on Relevant Radio, tweeted on Wednesday. “She lost her life in the tragedy that occurred at the Christmas parade in Waukesha, Wisconsin, on Sunday.”

Please pray for the repose of the soul of Tamara Durand, wife of Dave Durand, part of our @relevantradio family. She lost her life in the tragedy that occurred at the Christmas parade in Waukesha, Wisconsin, on Sunday.

Another “Granny,” Virginia “Ginny” Sorenson, 79, was the “heart and soul” of the team. In an August 2021 profile of the team by CBS 58, Sorenson explained that although she was sidelined from performing due to surgery, she stayed in the group as their choreographer.

“She always had a smile on her face and a kind word to share,” the dance organization said in a Facebook post on Nov. 22. “Our hearts are heavy today for the family and all who knew and loved Ginny. Please keep this family and all families affected by this tragedy in your thoughts and prayers.”

Leanna Owen, 71, was the shortest and smallest “Granny.” A Catholic, she was described by The Washington Post as “a Packers fan and an animal lover” who owned an English bulldog. She managed apartment buildings and “didn’t have a mean bone in her body.”