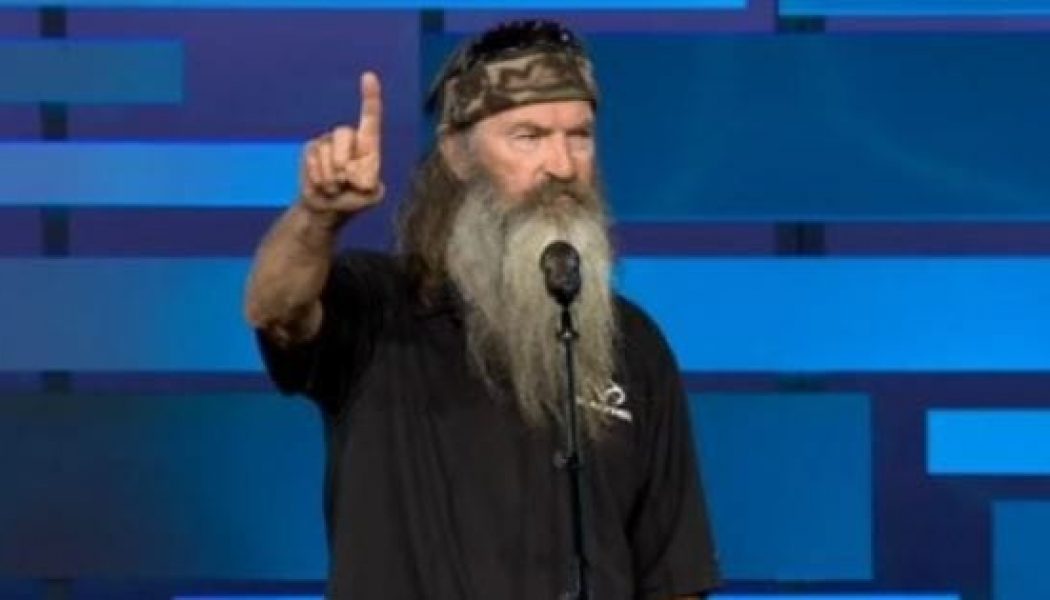 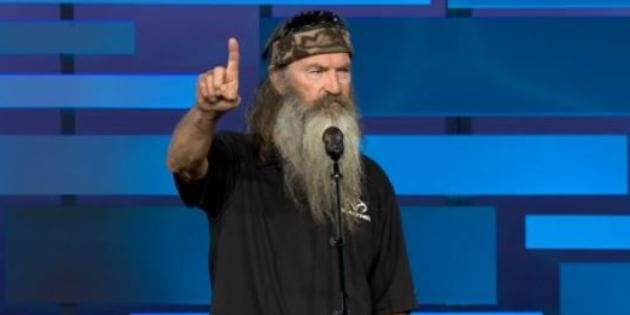 Phil Robertson of Duck Dynasty is an entertainer who looks like Moses and jokes like Bill Cosby. But having a quick wit isn’t a bad thing when the message is sin, righteousness, and judgment—a.k.a. the gospel of Jesus Christ.

“Apparently something rather large must have happened two-thousand and thirteen years ago, or we wouldn’t all be counting time by Jesus of Nazareth,” Phil Robertson dryly remarks during one of his messages at Saddleback Church in Southern California on July 21, 2013. Laughter erupts.

“So, what happened?” Phil continues, imitating a conversation.
“Uh, that’s the year Jesus showed up.”
“Oh, no. You mean here I am, an atheist, I don’t even believe in Him and I have to be reminded of the date He showed up every time I write a check?”

More laughs. Phil then delivers the Bible’s big, offensive message with the kindness of a grandfather.

·         Why did God become human? Because He wanted you to understand that He loves you. He needed to pay the price for your sin.

·         Let’s not justify ourselves and try to pretend what good people we are.

·         And because Christ rose from the dead, He can give you victory over death too.

Does that sound like the historic Christian gospel to you? It should. Sometime around 54 A.D. Paul the Apostle said as much to the early Christians in Corinth, Greece (1 Corinthians 15:1-26). He was beaten, jailed, and eventually executed for preaching that God’s deliverance only comes through the work of Christ.

Yes, it might be technically true that the gospel doesn’t get preached on the show Duck Dynasty (as some have pointed out). But we see a number of interesting people who are impacted by the gospel. Duck Dynasty is just plain old, good TV. It is entertainment, and that’s part of God’s common grace to all people (Acts 14:17). We can enjoy shows like Duck Dynasty with thanks (1 Tim. 4:4).

A lot of funny things happen in the day-to-day lives of this rare, intact family called the Robertsons. Along the way, we catch glimpses of the gospel’s footprint in people who are redeemed by Christ. And because they’re interesting people, they’ve earned a platform in pop culture that allows them to proclaim the gospel message broadly and more clearly when opportunities arise.

In other words, Phil sticks to what the thief on the cross next to Jesus would have understood. Maybe it’s because that’s what anyone hoping to beat death needs to hear and believe.

Yes, the gospel does go deeper. But in his role as “The Duck Commander” Phil isn’t leading a church in the sense that he spends a great deal of time expouding doctrine. He’s leading the life to which God called him, and he’s leading his family.

Phil’s life story demonstrates the results of the gospel: that Christ brings us out of sin (Titus 2:11-14); causes us to love God not hate Him, or (worse) ignore Him (1Cor. 16:22, 1Peter 1:8); rescues us from a self-directed life of going nowhere and leads us to see Him as the Good Shepherd who is worthy of being followed all our days (John 10:11, Psalm 23).

Because Jesus loves us, we can love others—both inside the church and out. All of that starts with receiving His love, embracing His truth, and loving Him back.

As Phil would say, “What’s wrong with that?”

Alex Crain is the editor of Christianity.com and a contributing editor for BibleStudyTools.com. He also serves as pastor of worship ministries at Harvest Christian Fellowship in the Richmond, VA area. Alex and his wife were married in 1995 and have three children. You can follow him on Twitter @Alex_Crain.

Phil Robertson’s book, Happy, Happy, Happy: My Life and Legacy as the Duck Commander is featured in the following interviews with him on GodTube.com and Crosswalk.com.