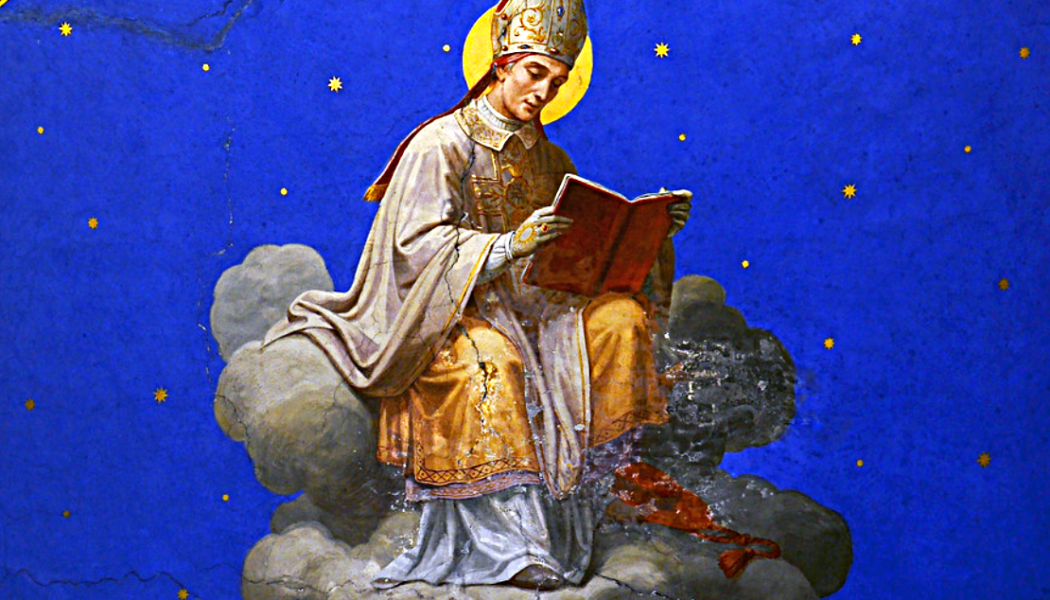 To kick things off, Today in Papal History marks the birthdate of the 76th pope of the Roman Catholic Church, Pope St. Vitalian.

Vitalian reigned for a decade and a half in the mid-7th Century, having dealt with some bad blood between East and West, as well as some hefty heretical disputes – Monothelitism in this case, the belief that Jesus Christ had only one will (he has two – divine and human), which was condemned by the Council of Constantinople not long after Vitalian’s death in 672.

However, neither of those, nor his personal holiness, are what Vitalian became best known for. Instead, it’s the use of organs in church worship, which are thought to have come into practice specifically during Vitalian’s papacy.

To answer two questions right off the bat:

The latter point, if you can believe it, was purportedly a factor in Conon’s elevation to the Chair of Peter in late 686.

Following the death of Pope John V, two warring factions broke out in the attempt to find a successor. The Roman clergy put forth the Archpriest Peter, while the military favored a cardinal priest by the name of Theodore. Each camp occupied a prominent Roman church to weather the storm – the clergy in the Lateran basilica and the military in San Stefano Rotondo.

When neither side was making headway – and likely once the man in charge of approving the selection, the Exarch of Ravenna, was growing impatient, the two parties sought out a compromise candidate and landed on Conon.

The military liked him for having come from a military family, and large populations of Greeks and Syrian refugees in Rome certainly increased his chances of election, but it’s said that both parties thought him a fair choice primarily for his simple character, his age – presumably because he might die soon and they’d get another crack at it – and, as it turned out, because of his ruggedly good looks.

I mean, it never hurts…?

At any rate, the Exarch of Ravenna confirmed Conon’s election almost immediately and he was consecrated on October 23, 686.

His papacy would be short-lived, however. Conon became the fourth pope in a row to last less than a year in office (St. Leo II, St. Benedict II, and John V being the first three).

Notably, though, within weeks of his election, Pope Conon was the recipient of a visit from the great Irish missionary St. Killian and 11 companions. Conon ordained Killian a bishop and sent the group to evangelize pagan Franconia, a region in the center of modern-day Germany that’s now home to cities like Nuremburg, Wurzburg, and Bamberg.

It was on that mission that Killian and two of his friends, Colman and Totnan, would receive the crown of martyrdom, being beheaded for the faith not three years later in Wurzburg’s town square.

And less than a century later the great St. Boniface – sent on mission to evangelize the Germans originally by Pope St. Gregory II – appointed the very bishop who commanded that Killian, Colman, and Totnan’s relics be dug up and placed in a tomb inside the cathedral he had built on that that very spot, where they remain to this day.

Thank you for reading Today in Papal History. Quick! Think of a friend or family member who’d love to read this, too…then click below to share it.

Sadly, Conon was sickly and frail for much of his short papacy, which all but paved the way for his advisers to wheel and deal and pad their own pockets.

In particular, he angered the Roman clergy by appointing a foreigner – a subdeacon named Constantine – to the cushy job of rector over the patrimony of the Church in Sicily, a rich position normally reserved for Romans.

And, his archdeacon, Paschal tried to ensure his own path to the papacy by bribing the Exarch of Ravenna ahead of his boss’ death. Theodore, who was a rival candidate to Conon originally, presumably saw that and put himself back in the mix again, too, to nobody’s excitement.

To combat this, Conon put up the name of his eventual legitimate successor – the man who became St. Sergius I – before departing this life for the next. The former two became antipopes after Conon’s death for a short time, but Sergius I emerged victorious.

Pope Conon died at the age of 57 and was buried in the left nave of St. Peter’s Basilica. He reportedly left lavish gifts to several groups as John V had done in his own will the year prior – giving gold to the Roman clergy, to those serving the poor out of various monasteries in Rome, and to the mansionarii – the staff charged with keeping watch over the Church’s sacred structures.

Sadly, Conon’s tomb was destroyed in the 16th Century during the demolition of the old St. Peter’s Basilica in preparation for construction of the new and current structure we know and love today.

Just two more papal tidbits from Today in Papal History – the first being the election of Blessed Pope Innocent XI.

Here’s the story on Innocent over at Popes in a Year:

Blessed Pope Innocent XI was elected to succeed Clement X thanks to everyone except the French cardinals. Innocent’s first acts as pope were reining in the spending and lifestyle of the Curia. He himself was well-known for living modestly, so he naturally expected the same of his brother bishops. That requirement of Innocent extended to clergy and laity, as well. In addition to his administrative work, the pope made sure his priests were well-educated and morally upright, reformed several Roman monasteries, and exhorted Roman citizens to dress modestly and avoid the temptation to gambling, which had gained popularity in recent years.

Innocent XI died August 12, 1689 after a papacy of nearly 13 years. Widely renowned for his holiness, Innocent’s cause for canonization was begun in 1714. Louis XIV, who was still alive at the time, tried to derail it by accusing Innocent of having aided the Jansenists (he hadn’t). Though his cause was shelved for over two centuries, Innocent had the last heavenly laugh and was beatified by Pope Pius XII in 1956. His feast day is August 2.

Our friend Fr. Richard Kunst from PapalArtifacts.com has several items in his collection from the papacy of Pope Innocent XI, who is one of just 10 popes to hold the title “Blessed” – being one step away from canonization – and who is considered to have been the greatest pope of the 17th Century. Most interesting among them are a letter written by Innocent XI from 1677, a silver snuff box belonging to this pope, as well as a first class relic (a small portion of a saint’s body, typically a bone fragment or sample of blood).

And finally, here is some fascinating footage from the 1956 beatification Mass of Pope Innocent XI, presided over by Venerable Pope Pius XII:

One last item from Today in Papal History is especially of interest to our readers in the United States. On the calendar of Pope John Paul I for September 21, 1978 was none other than a visit from a group of American bishops – those from the Pacific Northwest, specifically – in Rome for their ad limina visit (presenting the pope with a report on their dioceses once every five years), the first and only such visit that John Paul I would host in his 33-day pontificate.

In his address to the American bishops, JP1 gave a beautiful exhortation on the family as the fundamental source of Christian life, both echoing the work of Paul VI before him and perhaps foreshadowing the expansive work of John Paul II in the coming decades:

Although we are new in the Pontificate – just a beginner – we too want to choose topics that deeply touch the life of the Church and that will be very relevant to your episcopal ministry. We believe that the Christian family is a good place to start. The Christian family is so important, and its role is so basic in transforming the world and in building up the Kingdom of God, that the Council called it a “domestic Church” (Lumen Gentium, 11).

Let us never grow tired of proclaiming the family as a community of love: conjugal love unites the couple and is procreative of new life; it mirrors the divine love, is communicated, and in the words of “Gaudium et Spes”, is actually a sharing in the covenant of love of Christ and his Church (Gaudium et Spes, 48). We were all given the great grace of being born into such a community of love; it will be easy for us to uphold its value.

And then we must encourage parents in their role as educators of their children – the first catechists and the best ones. What a great task and challenge they have: to teach children the love of God, to make it something real for them. And by God’s grace, how easily some families can fulfill the role of being a primum seminarium (“first seminary”; Optatam Totius, 2): the germ of a vocation to the priesthood is nourished through family prayer, the example of faith and the support of love.

What a wonderful thing it is when families realize the power they have for the sanctification of husband and wife and the reciprocal influence between parents and children. And then, by the loving witness of their lives, families can bring Christ’s Gospel to others. A vivid realization of the sharing of the laity – and especially the family – in the salvific mission of the Church is one of the greatest legacies of the Second Vatican Council. We can never thank God enough for this gift.

It is up to us to keep this realization strong, by supporting and defending the family – each and every family.