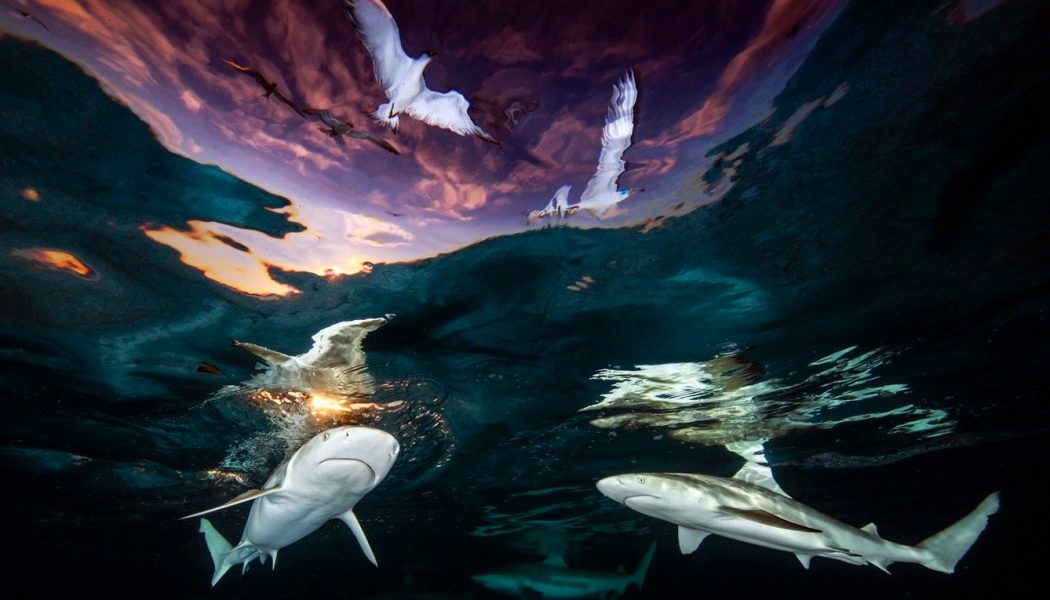 Earth is the only known planet in our solar system to have oceans, covering 71 percent of its surface, yet what lies beneath remains largely unexplored by humans. The Underwater Photographer of the Year Competition celebrates the extraordinary photographs that get us closer to fully understanding our deep blue enigma and “aims to promote new photographic talent.”

Here are a few of our favorites from the 2021 Underwater Photographer of the Year Competition with comments from the judges included.

Warning: some of the images may be upsetting to some readers.

A sunset ballet of reef sharks and sea birds in a tranquil corner of the Pacific Ocean is a richly deserved winner of the Underwater Photographer of the Year 2021. This is an image of hope a glimpse of how the ocean can be when we give it a chance, thriving with spectacular life both below and above the surface. — Alex Mustard

The very best cenote images often catch the judges’ eyes in UPY. But Martin’s picture raises the bar significantly both in terms of jaw dropping beauty and for its technical achievement. This is place few humans are capable of even reaching, so to get there and then produce a such a demanding piece of photography while in the darkness, deep underground and underwater is a stunning achievement. — Alex Mustard

A positive story to come out of the pandemic has produced a very well composed split level panorama. —Peter Rowlands

I honestly think that the appearance of this image will go down in the history of underwater photography as a defining moment. Perfect yet flawed, natural in urban. I think it is a masterpiece. Savour it. —Peter Rowlands

This image raises the bar for Basking Shark shots. There is so much that has to come right to get a shot like this that it might seem impossible but we now have proof. It is possible and it’s absolutely awesome! — Peter Rowlands

Seals are one of the UK’s most charismatic marine species and I love seeing this individual immersed in its habitat in the colourful underwater world of British Seas. It is a fresh take on a subject usually photographed near the surface or amongst sea weeds. — Alex Mustard

‘Aerial view of a crowded island in Guna Yala’

A stark visual reminder of how we humans over populate and totally develop land, then overfish the surrounding delicate environment. This image captures that unnatural and unsustainable imbalance perfectly. — Peter Rowlands

A physically small example of ‘ghost fishing’ where discarded plastic which takes hundreds of years to break down carries on catching and entrapping marine life. — Martin Edge

‘River of blood from a dead sperm whale‘

A terribly sad scene with the ocean saturated from the death of this great creature. The aerial view tells the story perfectly, revealing the sperm whale’s characteristic profile and the flood of blood on the tide. — Alex Mustard

Images leap out for several reasons; David and Goliath scale, magnitude and unambiguity to name three and this image has all of those and more. If you want to know the secret formula for a classic wreck shot, look no further. — Peter Rowlands

‘Reclaimed by the Ocean’

This is one of my most favorite photographs of the entire competition. As soon as I saw this shot I was mesmerized by the complexity of the lighting, the staging and just about everything else. To be able to set this up late in the day is nothing short of amazing. — Martin Edge

‘Golden Hour at the Georgios G’

The angular nature of the semi-silhouetted wreck contrasts brilliantly with curve of the colourful coral reef that claimed it. A split level image that is not only technically perfect, but really tells a story through both halves of the frame. — Alex Mustard

This backlight image of a very small pygmy sea horse is superb. The composition is so strong, just a hint of the branch and nothing more. Snooting this particular image is ideal. It’s bright within the pygmy itself but low key and subtle. The stark black background makes this image sing so loudly. Deserved winner of the macro category. — Martin Edge

They may be an invasive species in the Atlantic Ocean but they do make for arresting images and very strong contenders in competitions. — Peter Rowlands

Blackwater images abound and for all the right reasons but in competitions we are always looking for that something extra. This image, with it’s two ‘hitchikers’, fitted the bill perfectly. — Peter Rowlands

[See more finalists in the 2021 Underwater Photographer of the Year Competition here.]