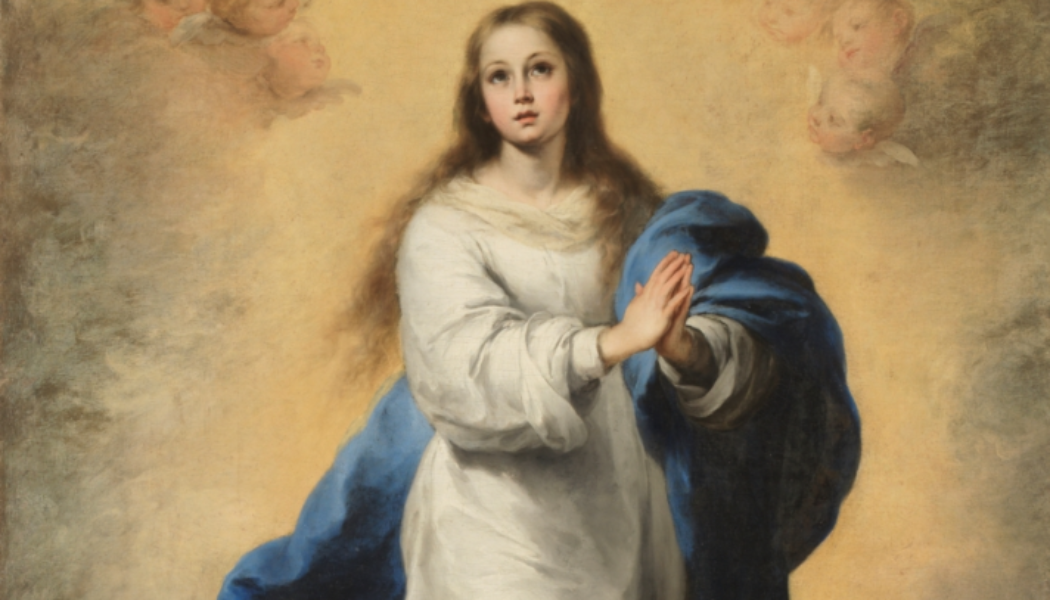 Every year during Advent, on Dec. 8, we celebrate the Solemnity of the Immaculate Conception, one of the most prominent Marian feasts in the Church’s liturgical year.

This celebration centers on the principle that Our Lady, from the very first moment of her existence, was free from original sin. Whereas the rest of humanity are conceived in a state of sin, she was born without this handicap; thus, she was immaculately conceived in a state of sanctifying grace. It should be noted that original sin is not a thing in itself, but rather, a deprivation of grace.

Catholic theology teaches that this wonderful exception in the case of Mary was due to the merits of Christ’s death and resurrection, which were foreseen by God and applied to her in light of the fact that she was to be the Mother of the Savior.

This tremendous and exclusive privilege also meant that the Blessed Virgin was exempted from concupiscence; that is, our tendency toward acting sinfully, and was, in fact, the complete opposite of Eve, who, although created in innocence, fell with Adam into sin. That is why the Fathers of the Church described Mary as the “new Eve”, alongside Christ, the “new Adam.”

Belief in the Immaculate Conception dates back to the early Christian centuries, but it was only officially and dogmatically defined by Pope Pius IX on Dec. 8, 1854. In his bull Ineffabilis Deus, he declared that this belief was henceforth to be held by all Catholics as an article of faith.

Prior to this, in 1830, the Blessed Virgin appeared to St. Catherine Labouré in the chapel at the Rue du Bac convent in Paris. On Saturday, Nov. 27 of that year, during an apparition, an oval frame formed around Our Lady with golden lettering that read: O Mary, conceived without sin, pray for us who have recourse to thee.

A medal with this design was produced and quickly became known as the “Miraculous Medal”, because of its supernatural properties, including many dramatic cures and miracles. But as the above wording implies, its real title is the “Medal of the Immaculate Conception.” In due course, the propagation of the medal helped to prepare the ground, spiritually, for the papal proclamation of the dogma of the Immaculate Conception.

At Lourdes, on March 25, 1858, the feast of the Annunciation, this proclamation was reinforced when Our Lady identified herself to St. Bernadette: “I am the Immaculate Conception.”

At Fatima, Mary didn’t specifically refer to herself with this title, but she spoke about her Immaculate Heart, a central part of her message.  On June 13, 1917, she said to the little shepherds: “Jesus wants to use you to make me known and loved. He wishes to establish the devotion to my Immaculate Heart throughout the world. I promise salvation to whoever embraces it; these souls will be dear to God, like flowers put by me to adorn his throne.”

There is a progression here from her being the Immaculate Conception in, as it were, her essence or being, to regarding her from the point of view of her person, as represented most intimately by her Immaculate Heart.

Our Lady appeared later to Lucia on Dec. 10, 1925, at her convent in Pontevedra, Spain, where she was a postulant, to announce the devotion of the five First Saturday Communions of Reparation, first mentioned during the July 1917 apparition.

Sometime later, as Sr. Lucia was praying before the Blessed Sacrament, she received an interior locution as to why it was necessary to make a communion of reparation on five Saturdays. She had been given to understand that this related to the five main types of blasphemies and offenses committed against the Immaculate Heart of Mary, and that the first of these offenses was against the Immaculate Conception, for which acts of reparation should be made.

The word “blasphemy” comes from two Greek words, which jointly mean injuring someone’s reputation. But in a religious sense, it is more a question of flagrant irreverence or contempt as regards God, in particular, but also holy persons, and especially Our Lady. If such blasphemies are deliberate, then a grave sin is committed, and hence, there is a need for reparation for this sin.

Reparation is the principle that it is possible to atone for the sins of others through prayers, penance and good works, following the example of Christ, who, through His Passion and death atoned for the sins of all mankind. Thus, he made reparation to God the Father for our offenses.

Since Our Lady is so closely united with God, as the Mother of His only Son, then any blasphemy against her also deeply affects Him, and this is why reparation is so important. And since, after the Divine Maternity, the Immaculate Conception is probably the most important attribute of Mary, then offenses against this principle are particularly serious and need to be repaired.

The best way to do this is through participation in the Holy Mass, which is a way of entering into the sacrifice of Christ on Calvary. But the Blessed Virgin also revealed to Sr. Lucia that through the Five First Saturdays devotion, which includes receiving Holy Communion, and thus ordinarily means attending Mass, we can also make reparation for offenses against her Immaculate Heart.

In conclusion, we can note that St. John Paul II, in his Marian encyclical Redemptoris Mater (The Mother of the Redeemer), had this to say about Our Lady in connection with this season and feast:

“The fact that she ‘preceded’ the coming of Christ is reflected every year in the liturgy of Advent. … [and so] in this present period we wish to turn in a special way to her, the one who in the ‘night’ of the Advent expectation began to shine like a true ‘Morning Star.’ For just as this star, together with the ‘dawn,’ precedes the rising of the sun, so Mary from the time of her Immaculate Conception preceded the coming of the Savior, the rising of the ‘Sun of Justice’ in the history of the human race.”

So in celebrating the Immaculate Conception of Our Lady, we are also looking forward to the Birth of Christ and the joys of Christmastide, which will be upon us in just a few weeks.

Donal Anthony Foley is the author of a number of books on Marian Apparitions, and maintains a related web site at www.theotokos.org.uk. He has also written three time-travel/adventure books for young people, details can be seen at: http://glaston-chronicles.co.uk