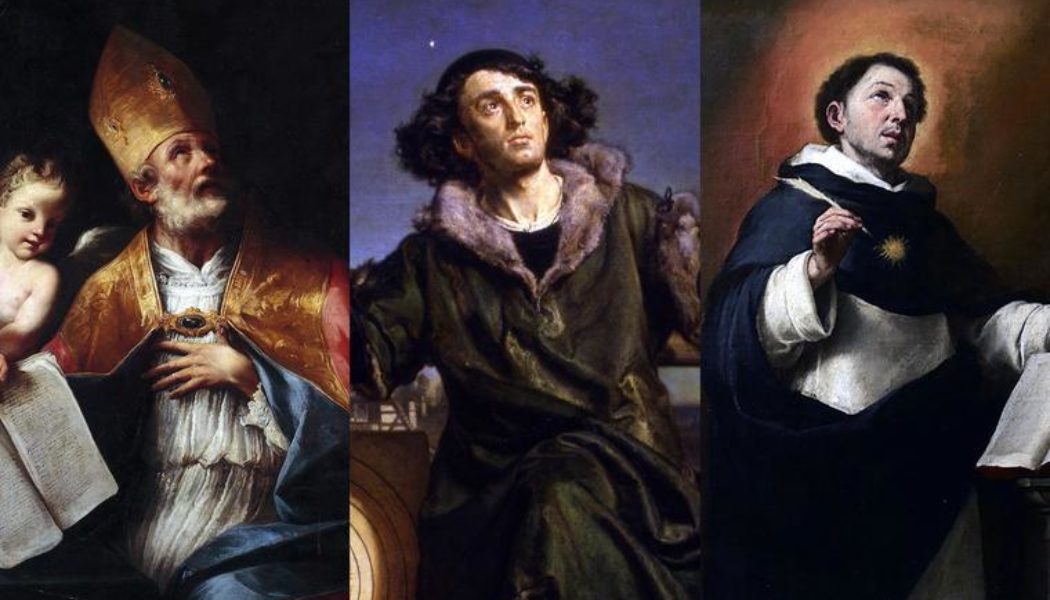 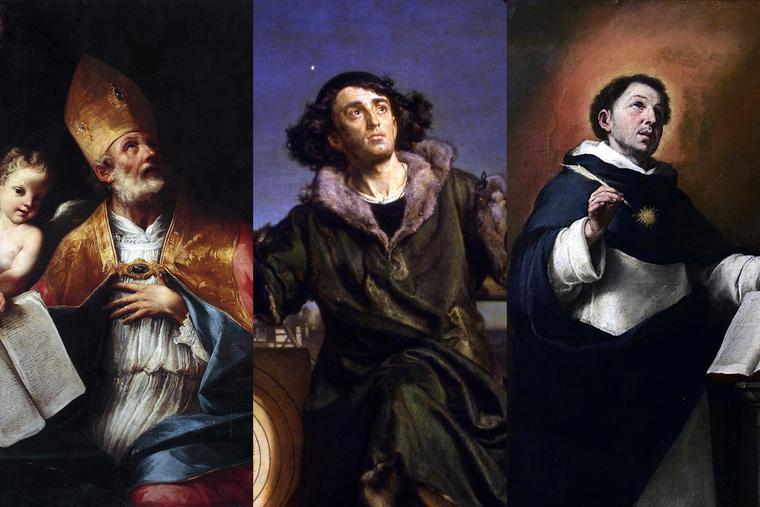 When you look at Jupiter and its moons, think of the role that those dots of light have played in Church history

See Part I of this series here.

So what does seeing Jupiter’s moons have to do with Church history, other than perhaps the Galileo connection? It’s those dots of light, and their sizes, that are the history connection. They have played a role in discussions of Genesis, and in the Church’s opposition to Galileo’s ideas.

In Genesis 1:14 God says, “let there be lights in the dome of the sky.” Genesis 1:16 says, “God made the two great lights … and he made the stars.” If the sky is a dome, this is all straightforward. The sun, our moon and the stars are lights on that dome, all the same distance from Earth. Their sizes are therefore just as they appear — the sun and moon appear larger than the stars, and so they are larger.

But astronomers of the ancient world were able to determine through basic observations and geometry that the sun was more remote than the moon, and the stars much more remote than both. By about A.D. 150 the Greek-Egyptian astronomer Ptolemy had worked out a sophisticated theory of the universe, in which Earth, while at the universe’s center, was just a point in comparison to the distance to the stars. The Earth had to be just a point, because changing your location on Earth had no effect on the brightnesses and relative locations of the stars in the sky. (Click here for a full discussion of this from the Vatican’s astronomical observatory.)

Ptolemy’s arguments about the distance to the stars and the size of the Earth were convincing, and were accepted by Christian writers. For example, the universe of Ptolemy, not of Genesis, appears in St. Severinus Boethius’sConsolation of Philosophy, a discussion on God and Providence and evil that Boethius wrote from prison around the year 525. In considering the pursuit of glory, Boethius writes:

Consider with me in the following detail, how limited this glory is! How frivolous and how contemptible! You have learned from astronomy, that this globe of earth is but as a point, in respect to the vast extent of the heavens; that is, the immensity of the celestial sphere is such that ours, when compared with it, is as nothing, and vanishes. You know likewise, from the proofs that Ptolemy adduces, there is only one fourth part of this earth, which is of itself so small a portion of the universe, inhabited by creatures known to us. If from this fourth you deduct the space occupied by the seas and lakes, and the vast sandy regions which extreme heat and want of water render uninhabitable, there remains but a very small proportion of the terrestrial sphere for the habitation of men. Enclosed then and locked up as you are, in an unperceivable point of a point, do you think of nothing but of blazing far and wide your name and reputation? What can there be great or pompous in a glory circumscribed in so narrow a circuit?

Boethius was an influential thinker whose works were widely read, especially in medieval times (and if you have read Carl Sagan’s “pale blue dot” discourse, you have to wonder if he borrowed it from Boethius).

St. Augustine, the 5th-century African bishop who has been even more influential to the Christian world than Boethius, noted the difference between Genesis and what astronomers said in his On the Literal Interpretation of Genesis. He warned against citing scripture over science:

Even a non-Christian knows something about the earth, the heavens … the motion and orbit of the stars … and this knowledge he holds to as being certain from reason and experience. Now, it is a disgraceful and dangerous thing for an infidel to hear a Christian, presumably giving the meaning of Holy Scripture, talking nonsense on these topics [Book I, 19.30].

Augustine uses as an example how astronomers claimed that some stars were greater than the sun, and certainly than the moon, those bodies that Genesis calls “great lights.” This claim resulted from those vast distances Ptolemy had calculated, and from the sizes that stars appear in the sky — those dots of light discussed in Part I. For the stars to appear the size they do in the sky and be so far away, they must be very large indeed. “Grant this at least to our eyes,” says Augustine (Book II, 16.34), “that these two lights obviously shine more brightly upon earth.”

St. Thomas Aquinas, the 13th-century Italian theologian who has been as influential as Augustine, likewise considered the question of star sizes. In his Summa Theologiae, Part I, Question 70, discussing the Fourth Day of creation, he notes that “as astronomers say, there are many stars larger than the moon. Therefore the sun and the moon alone are not correctly described as the two great lights.” To this he answers:

As Chrysostom says, the two lights are called great, not so much with regard to their dimensions as to their influence and power. For though the stars be of greater bulk than the moon, yet the influence of the moon is more perceptible to the senses in this lower world. Moreover, as far as the senses are concerned, its apparent size is greater.

In other words, St. Thomas accepted the results of the astronomy of his time (still that of Ptolemy), and in light of those scientific results interpreted the Bible as describing the heavens as they appear to us.

In dealing with the star size question, Aquinas, and Augustine before him, grant that we interpret scripture in light of the results of science — that Genesis, in describing the sun and moon as “the two great lights” versus the stars, is describing the universe as it appears to us; it is not stating that Earth’s moon is larger than the stars in absolute terms. When Galileo was arguing that the Earth circles the sun, he was saying this same thing. He was saying that Bible verses that describe the sun as moving (such as Ecclesiastes 1:5: “The sun rises and the sun goes down; then it presses on to the place where it rises again”) and the Earth as fixed (such as Psalm 104:5: “You fixed the Earth on its foundation, never to be moved”) were describing the universe as it appears to us. Church leaders like Cardinals Carlo Conti and Robert Bellarmine told Galileo that yes, that interpretation can be made, but, as Conti put it, “il qual modo d’interpretare, senza gran necessita non non si deve ammettere” or “this mode of interpreting must not be admitted without great necessity.” The question was, was it necessary? Did the scientific evidence require it? For all that has been said regarding science versus religion in “the Copernican Revolution,” ultimately the question was a matter of science.

And on that matter those illusory dots of light — the same that play a role in why we cannot so easily see the moons of Jupiter without a telescope — came back into play. Recall that in an Earth-centered universe like that of Ptolemy, changing your location on Earth had no effect on the brightnesses and relative locations of the stars in the sky. Well, if Earth orbited the sun, then changing your location on Earth’s orbit had no effect, making the Earth’s orbit like a point, and making the stars all that much farther away — and because of those dot sizes, making the stars all that much larger.

If Earth moved, then the brightest stars would be the size that the entire universe was thought to be under Ptolemy. No stars would be smaller than Earth’s orbit. All would dwarf the sun. Tycho Brahe, the leading astronomer of the time, said this was absurd, and a powerful scientific argument against Earth’s motion. He developed a different theory of the universe, a theory that both had the Earth unmoving at the center and was compatible with Galileo’s telescopic discoveries. Churchmen who opposed Galileo cited Brahe’s star size argument and supported his theory in their writings.

Eventually those dot sizes were discovered to be illusory. The star size argument against Earth’s motion collapsed. But this was not until many years after Galileo’s death. Galileo himself could never overcome Brahe’s argument. He could never show that it was necessary to make that reinterpretation of scripture.

So when you look at Jupiter, and you try to see its moons peeking around that dot of light (one-tenth the diameter of the moon, Brahe said), and you see the other dots that are the stars, think of the role that those dots of light have played in Church history. They reveal all those stories about how the Church has opposed science with Scripture, or how churchmen refused to look at the sky and see and think for themselves, to be just that — stories.