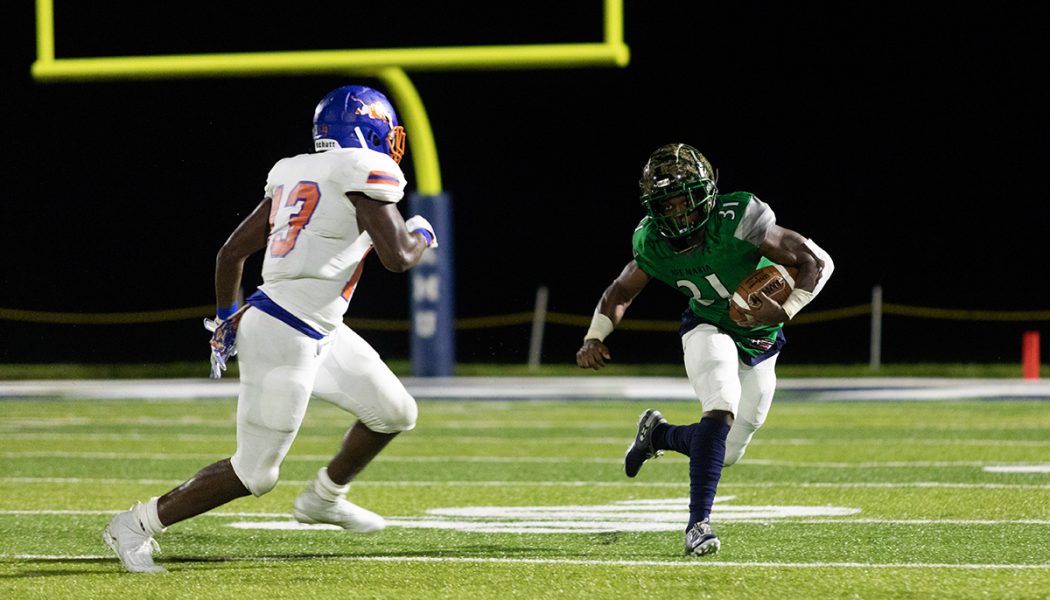 The phrase “Hail Mary” has long been associated with football, but seldom in such an edifying way as this.

Many years from now, as we look back and try to explain the Year 2020 to our grandchildren, part of that conversation will be about the things we missed while the world was in isolation and quarantine. We will talk about the closing of the churches and the inaccessibility of the sacraments, but we’ll also reference the more worldly things we missed.

In that last category, I would put sports very high on the list. I know I speak for many people when I say that I have missed sports terribly during what has amounted to the longest timeout in sports history. So when I recently had the chance to attend Ave Maria University’s opening home football game, I jumped at the chance.

My daughter Philomena enrolled in Ave Maria University in July and quickly fell in love with the place. And so did my wife and I. When we toured the campus earlier this year, we met with members of the admissions staff, coaches and current students. We also met with the university’s new president, Dr. Christopher Ice, who took time out of his schedule to warmly welcome us. Everyone at Ave was kind, caring and devoted to helping our daughter make the transition from home school to college. So when Philomena enrolled (and was offered the job of Team Manager of the Women’s Basketball Team), I became a “Gyrene” fan.

So there we were, back on campus two months after this initial visit, to see Ave Maria University (AMU) take on Florida Memorial (FMU).

Arriving about an hour before the scheduled kickoff, I was able to see some new friends and strike up a great conversation with Tom Monaghan, the school’s founder and a generous Catholic philanthropist, entrepreneur and sports fan. I thanked him not only for Philomena’s scholarship (The Eastern Catholic Brilliant Jewel Scholarship), but also for founding Domino’s Pizza — my son Bonaventure’s all-time favorite food.

As we spoke, we watched the pregame clock tick down, but it was announced that lightning nearby would delay the game. Though my new Ave Maria friends assured me that the lightning would pass and the game would soon begin, I wondered how Ave’s coach would keep his players “up” for the game during their wait.

But whatever Coach Joe Patterson did to keep his players motivated, it worked. On the opening kickoff, sophomore Nick Torres fielded the ball on his 4-yard-line and, running through a gap opened for him by some great blocks, ran 96 yards for a touchdown. Scoring another touchdown four minutes later, amidst the “Ave Maria!” prayers, chants and cheers from the stands, AMU never looked back.

It is said that football games are won or lost at the line of scrimmage, and AMU controlled the line of scrimmage all night. Led by junior running back Quino Mauricette, AMU rushed for a combined 248 yards and averaged 6.7 yards per carry. On the other side of the ball, AMU allowed only 27 yards of net rushing all night. Final score: Ave Maria 42, Florida Memorial, 6.

Why bother writing about football now, with so many important things going on in the world? The answer is simple: Because it is important.

Vince Lombardi, the Green Bay Packers coach often considered to be the greatest ever, as well as a daily communicant, once observed, “People who work together will win, whether it be against complex football defenses, or the problems of modern society.” After speaking to Ave’s coaches and seeing their teaching styles, it is clear that they are trying to develop persons, rather than simply players. As Coach Patterson phrased it in a recent interview, “Many of the lessons learned on the competitive field are going to translate into life, and so at Ave you have a chance to pursue those lessons in a manner that is consistent with the Faith.”

As a former college baseball coach, I used to tell my players, “The (baseball) diamond defines who we are.” As I thought about Ave’s game, I realized the same concept was true for football. Controlling the line of scrimmage isn’t just about football; it’s about life. It’s about developing yourself so you can protect those you love; it’s about courageously taking the field to make a statement. And if you’re truly blessed, you have coaches and teachers who can help you accomplish those remarkable things, in a beautiful place to learn them.

The phrase “Hail Mary” has long been associated with football, but never like this.

As I drove home that night after the game, I realized that something had been confirmed to me: there’s something pretty special going on in southwest Florida — both on and off the field.