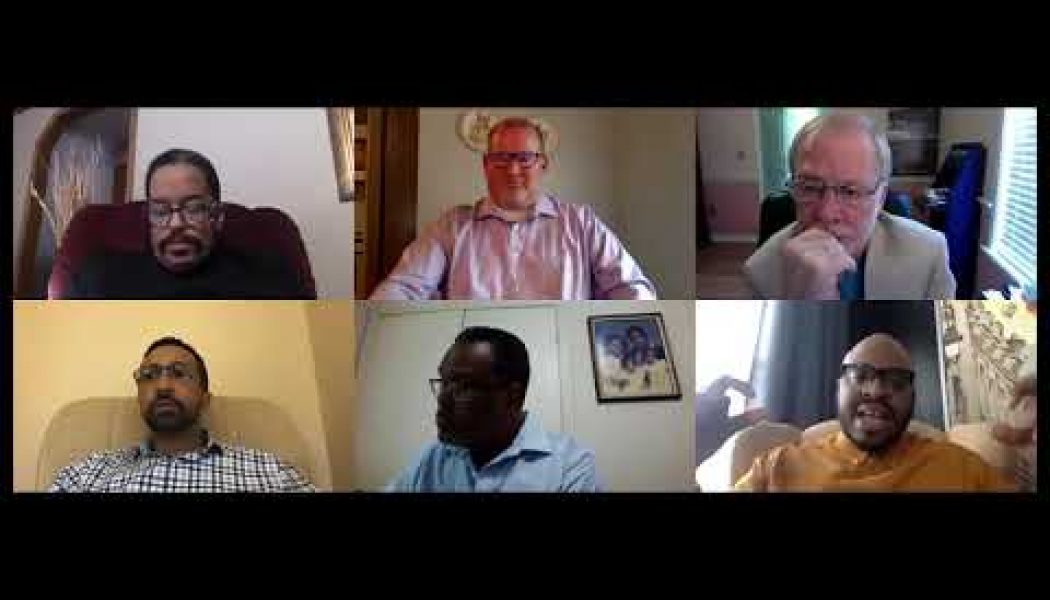 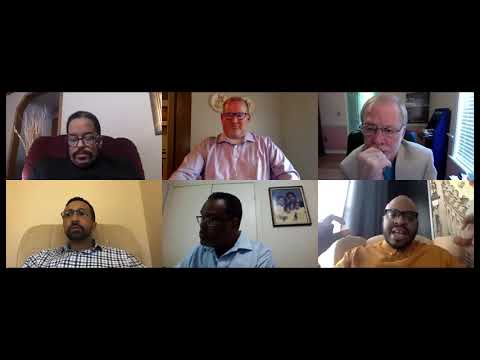 It was impossible to continue business as usual in a seminary classroom in the spring of 1992, as flames and violence spread through parts of Los Angeles.

This was especially true while team-teaching a seminar blending studies of the Old Testament prophets with moral and spiritual signals drawn from contemporary news and entertainment media. In this particular seminar at Denver Seminary, half of the future pastors were black and half were white.

Hear the word of the Lord, O King of Judah sitting on the throne of David — you, and your servants, and your people who enter these gates. Thus says the Lord: Act with justice and righteousness, and deliver from the hand of the oppressor anyone who has been robbed. And do no wrong or violence to the alien, the orphan, and the widow, or shed innocent blood in this place. … (If) you will not heed these words, I swear by myself, says the Lord, that this house shall become a desolation.

Our leader, the late Haddon Robinson — one of the greatest homiletics professors ever — approved the following assignment, as we approached the first Sunday during the riots. We asked each white student to contact a black pastor, seeking insights into the sermon preached that Sunday. We asked black students to contact white pastors with the same goal.

I thought of that assignment while reading waves of news coverage of the protests and riots — note that the distinction — after the death of George Floyd, his neck under a white Minneapolis police officer’s knee. I also remembered that seminar in 2015, standing in my front yard watching smoke and flames in the night sky over Baltimore.

It’s impossible to do justice to the many religious themes and images in the events — peaceful and violent — linked to Floyd’s death, from the many protestors kneeling in prayer (sometimes with police) to rioters painting obscene curses on historic sanctuaries.

But we can see one constant that journalists should remember under these circumstances: The voices of the black church will be there — somewhere — and if you seek them out, you will find words, images and ideas that are crucial to those building coalitions seeking justice and change. And when it’s time to heal and clean up, look for religious folks of all kinds — black, white, whatever. They will be there, day after day.

Believers are not the whole story, but they are always a big part of the story. Without those voices you will miss valid news. If you talk to the black clergy in protests, you will also — nine times out of 10 — quickly find out who has organized the protests and who is trying to twist them to some other purpose.

You will also learn that — for those believers — their actions are rooted in faith, more than in politics. Listen to the language and you will find out why religion-beat reporters should always be assigned to the teams who cover tragic events of this kind.

So, briefly, what did our Denver seminarians discover long ago? We learned that every one of the black pastors contacted addressed the LA riots and almost all of them, at some point, quoted the prophets of the Bible. The big theme: America needed to repent because there is enough sin and brokenness in this racism and violence to touch us all. If I remember correctly, only one white preacher addressed the riots. (Some didn’t want to interrupt planned sequences of topical sermons.)

You see, the preaching traditions in black churches are directly linked to helping their communities wrestle with the truths seen in the events unfolding around them. Silence is rarely, if ever, an option.

So how does this affect coverage now?

Clearly, political angles must be covered. I would never deny that. And hard news coverage of the events will always stress sources linked to public officials and other first responders, along with eye-witnesses.

But what are we to make of this Washington Post headline — “Buildings burn, and Trump talks tough. Where are the healers?“ — and the story under it? It’s crucial to note that the story has this label — “Politics.”

Where are the “healers”? Apparently, the goal in this political-desk story was to find healing at the White House, in academia or in secular leadership posts, alone.

That’s one view of “healing.” Good luck with that, these days.

“We support the right of peaceful protests and we hear their pleas, but what we are now seeing on the streets of our cities has nothing to do with the memory of George Floyd,” Trump said after watching the SpaceX launch in Florida. “The violence and vandalism is being led by antifa and other radical left-wing groups who are terrorizing the innocent, destroying jobs, hurting businesses and burning down buildings.”

In the absence of presidential leadership, and with crowds gathering yet again Saturday night, members of Congress, governors and mayors need to step up, said Princeton University historian Julian Zelizer.

“If some leaders don’t offer a prospect of change in the next few days, that sense of hopelessness we’re seeing on the streets just gets worse,” said Zelizer, who studies the 1960s and ’70s, a period of similar social and economic upheaval when divisions over race and class exploded into riots.

“Good leaders cannot separate themselves from the turbulence,” Zelizer said. “If they’re silent, or if they’re too distant, it just adds to the frustration people feel.”

So what’s The Big Idea here (to use a concept from the work of Haddon Robinson)?

There is no magic formula for averting a long, hot summer of street violence and social discord, of raging flames and physical confrontations. Through several nights of intensifying protests following Floyd’s death on Monday, few moments have offered any promise of a healing connection. Rather, the people Americans have chosen to take charge in times of crisis have more often left a leadership vacuum — such as the remarkable absence of police and public officials on the streets of Minneapolis in recent days.

A rare exception came on Friday night in Atlanta. As fires burned and angry crowds banged up against lines of police officers, the city’s police chief, Erika Shields, waded into a clot of protesters and listened to their grievances.

Shields told the protesters that bad cops must be “weeded out and fired before they can choke somebody.” She told them again and again, “I’m with you.” She gently touched their arms.

That material from Atlanta was crucial and, frankly, amazing.

But here is my question: What are the odds that Police Chief Erika Shields or members of her team have been in regular contact with Atlanta’s strong community of religious leaders with decades of experience in efforts to promote civil rights?

I know that religious voices cannot be included in every news report. But we are talking about Atlanta (Journal-Constitution update here). Even journalists far from Georgia can grasp the role religion frequently plays in a city like Atlanta.

Or how about this amazing — “uplifting,” even — Forbes report, under this headline: “In Some Cities, Police Officers Joined Protesters Marching Against Brutality.” Click that link and check out the photos.

Wendell Franklin, Tulsa’s first permanent African American police chief, is a longtime member of The Park Church of Christ, which encircled him and his family in prayer after his appointment earlier this year. https://t.co/tsKJa84XxO

Wendell Franklin, Tulsa’s first permanent African American police chief, is a longtime member of The Park Church of Christ, which encircled him and his family in prayer after his appointment earlier this year. https://t.co/tsKJa84XxO

Yes, the police officers marched. But they also did quite a bit of kneeling — a gesture with multiple layers of symbolism under these circumstances. Had any of the people who organized these healing gatherings taken part in earlier rites in which they knelt together in prayer? Did these symbolic meetings in city streets grow out of gatherings in sacred sanctuaries?

If you are looking for strong religious content, during these trying times, you can — as seen above — look to the work of our colleague Bobby Ross, Jr., and the Christian Chronicle.

I would also recommend this must-read feature by Kate Shellnut at Christianity Today: “George Floyd Left a Gospel Legacy in Houston — As a person of peace, ‘Big Floyd’ opened up ministry opportunities in the Third Ward housing projects.” This round-up by Religion Unplugged (which ran at Newsweek) contains quite a few links to religion angles in mainstream and religious media.

But to demonstrate some of the bridge-bulding going on in the middle and even the center-right part of the American religion scene, consider this piece of interview material with a Minneapolis pastor — the Rev. W. Seth Martin — who lives a block from where Floyd died.

“I firmly believe Jesus is on the side of the oppressed. I believe that George Floyd is somebody who is made in the image of God, and that regardless, his life didn’t have to be taken,” Martin said. “I still believe, even in the midst of all of this, that Jesus is the answer, that the church still has the answer.

The twist here? Martin is a black pastor and “church planter” who is part of the growing African-American presence in the Southern Baptist Convention. These quotes are drawn from a feature at Baptist Press (click here for SBC statement on Floyd’s death).

Here’s more from this urban pastor, who rejected the violence, but added:

“When people are hurting and want to be heard, people will go to extreme measures to try to get people’s attention. I think that that is what we are seeing. We’re seeing not just people doing things to take advantage of a moment, but I think we’re seeing people who are bubbling over with the hurt and the anger that they feel and that even, honestly, that I feel.

“The hardest thing for me has been how do I contain my raw emotions, and simultaneously not mismanage what God has called me to be and what Jesus has put me on the earth to do.”

Stay tuned. And please let us know if you see coverage of these protests and riots that cries out for attention.

I wouldn’t call our faith of George Floyd piece a round-up. We published before Christianity Today and interviewed George Floyd’s Houston pastor and ministry friends, as seen in our full video conversation. Here is that report.

Thanks for including our coverage.

First image: Screen shot from coverage by WDJT, the CBS affiliate in Milwaukee.